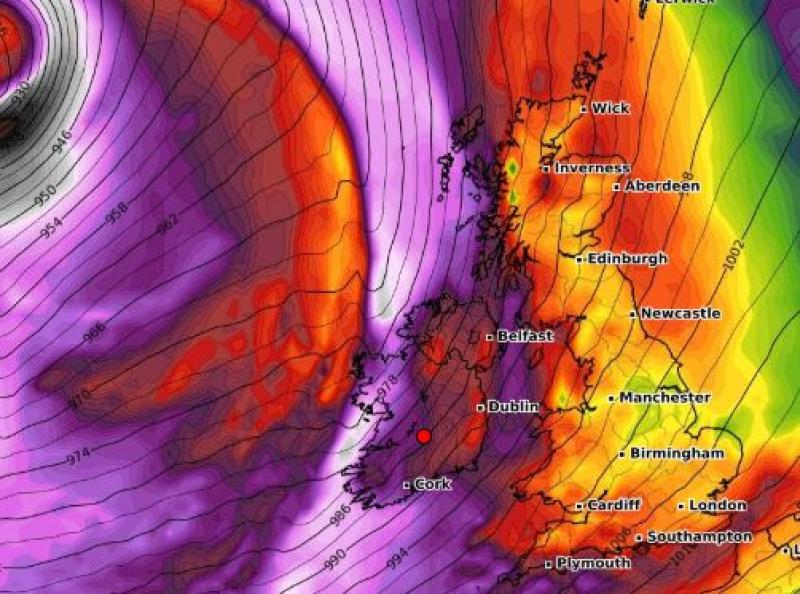 It will turn less cold from Thursday but Storm Denis is on the way and is currently forecast to impact Ireland on Saturday. See a forecast on Storm Denis below from the Met Office.

The weather forecast for Wednesday is for it to be dry and bright in many areas with spells of sunshine. However, some wintry showers will occur early on, becoming mainly confined to the northwest by late morning. Later in the day rain will move into the southwest. Another cold day with highest temperatures of only 4 to 8 degrees, in mostly moderate, occasionally fresh west to southwest breezes.

On Wednesday night, rain will extend northwards to all counties accompanied by strengthening southeasterly winds with some spot flooding. The rain will turn to snow across parts of Connacht and Ulster with accumulations for a time before the snow transitions to rain by Thursday morning. Minimum temperatures of 1 to 4 degrees.

The weather forecast for Thursday is for showery outbreaks of rain across the country with blustery west to northwest winds. Turning drier later in the day as temporary ridge of high pressure builds in from the Atlantic. Highest temperatures ranging from a rather chilly 4 or 5 degrees in Ulster to 9 or 10 degrees along the south coast. Dry for much of Thursday night with a risk of frost and lowest temperatures of 0 to 4 degrees, coldest in the north and east.

Southerly winds will strengthen on Friday and a band of rain will move quickly in across the western half of the country during the morning, extending eastwards to remaining counties in the afternoon. A clearance to bright spells and showers will follow from the west. Top temperatures of 9 to 12 degrees. Clear spells on Friday night but rain is expected to arrive along the Atlantic seaboard during the night and southerly winds will freshen. Lowest temperatures of 5 to 8 degrees.

According to Met Eireann, early indications suggest Saturday will be a wet and windy day with heavy rain clearing to showers during the afternoon and evening. Top temperatures of 8 to 12 degrees in strong and gusty southwest winds. Turning colder overnight with scattered rain or hail showers and lows of 2 to 5 degrees. The Met Office in the UK has already named and issued Weather Warnings for Storm Denis. See more below.

The latest guidance indicates that Sunday will be another wet and blustery day with showers or longer spells of rain.

Another storm this weekend, as discussed in Tuesday's Weather Studio Live