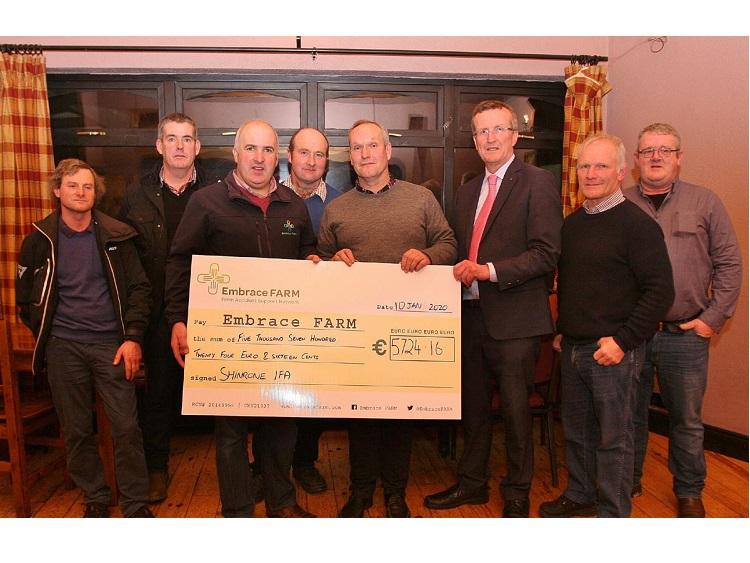 Pictured above handing over the cheque is Dan Cleary, Shinrone IFA chairman to Brian Rohan, founder and chairman of Embrace Farm while Tim Cullinan IFA President is on the right

Amid election fever for the new presidential candidate for the Irish Farmers Association (IFA), the Shinrone IFA branch took it upon themselves to arrange a Tractor Run in their local community. In association with Sunrise Vintage Tractor Group, the event took place on Sunday, December 29, 2019 beginning at Shinrone Community Centre in the heart of south Offaly.

The route took over 150 tractors on an hour drive around the surrounding countryside, with one of the highlights being a stop in Mount St. Joseph’s Abbey. It was a spectacular site to see so many tractors both modern and vintage with the backdrop of the Abbey in the frame.

The event itself, which was sponsored by Corrib Oil, Centra Shinrone, The Castle Bar Shinrone, and many more local sponsors went off without a hitch. The funds raised which amounted to almost €6,000.00 were donated to Embrace FARM the Farm Accident Support Network.

Established in 2014 by Brian and Norma Rohan following the death of Brian’s father, Liam, on their family farm in 2012. The network helps families through the loss or serious injury from a farm accident. With their annual ecumenical remembrance service being held on the last Sunday of June each year, this is their main event to remember hundreds of lives lost on Irish farms over the years. On average there is 20 deaths on farms in Ireland annually and these statistics don’t seem to be changing.

The cheque was handed over on the evening to Embrace FARM’S chairperson Brian Rohan by Dan Cleary, Chairperson of Shinrone IFA and Tim Cullinan, forthcoming president of IFA from January 27, 2020 onwards.

Embrace FARM wishes to thank everyone involved in this tremendous event, it is a true signature of rural and urban communities coming together to support worthy causes.

Pictured here are members of Shinrone IFA and Sunrise Vintage Club who were to the forefront in helping the fundraising venture. Dan Cleary, Shinrone IFA chairman and special guest Tim Cullinan IFA President, presents the proceeds of €5724.16 to Brian Rohan, founder and chairman of Embrace Farm 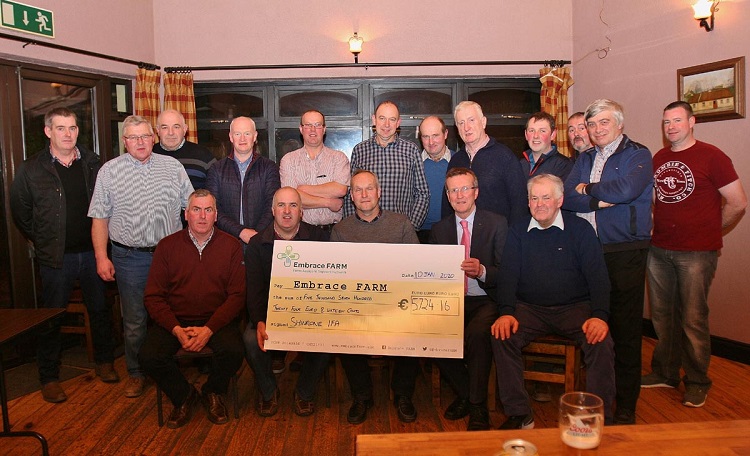