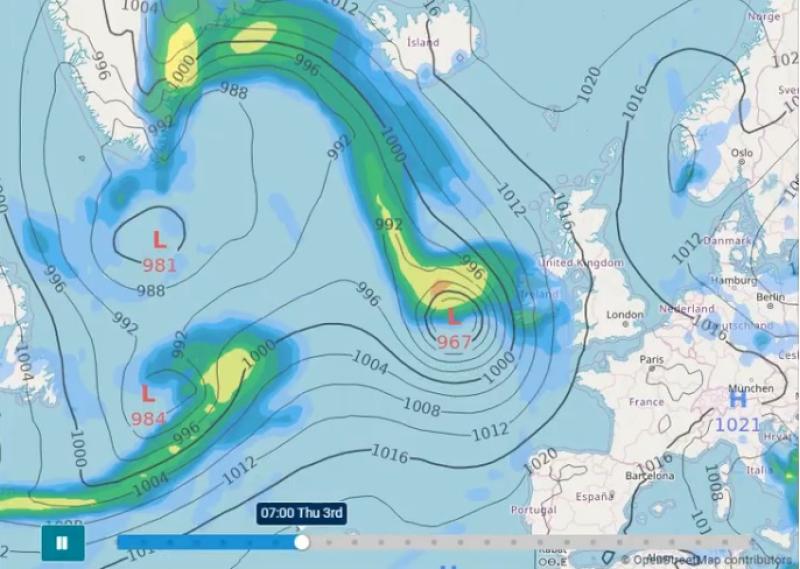 Met Éireann has published new satellite footage and forecast video of Hurricane Lorenzo's current track alongside a weather forecast which warns of 'severe' winds across Ireland.

The tweeted satellite footage on Tuesday morning that shows the hurricane slowly moving northeast, it is expected to transition into an extratropical storm before it reaches Ireland.

The tweeted seven-day forecast on Tuesday morning shows the storm pushing across the middle of Ireland. It appears that the storm will veer to the east when it reaches the west coast of Ireland. See the projected path in the video in the tweet.

A nationwide forecast and outlook covering the next week can be found here. https://t.co/9gKN6SVok4 pic.twitter.com/d28eEjkNxT

Infrared Satellite imagery, you can see hurricane #Lorenzo slowly moving north east, it is expected to transition into an extra tropical storm before it reaches Ireland. pic.twitter.com/pr2fFEKYRl

Met Éireann's weather forecast issued at 10.53 am on Tuesday, October 1 says that though there is still uncertainty regarding the exact of Lorenzo, there is a high probability that it could track close to or over Ireland in a weakened form, bringing strong winds, southeasterly initially.

The forecaster expects these to veer westerly and strengthen further, with a risk of "severe winds" developing later Thursday and Thursday night, depending on the track. Spells of rain also, with high seas and swells. However, the details of the forecast may change.

The indications are that conditions will quickly improve on Friday with winds veering northwesterly early on and becoming mostly moderate during the morning. It will become mainly dry also, with maximum temperatures in the mid to high teens.