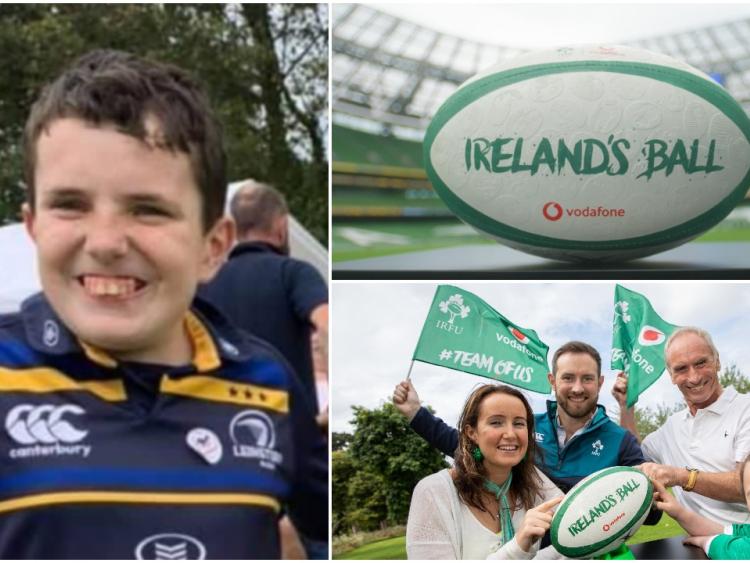 A young Offaly boy has won the right to present the Irish Rugby team with a very special ball ahead of the Rugby World Cup later this month.

As the build-up to the Rugby World Cup in Japan continues with every passing day, Vodafone has kicked it up a notch with their Ireland's Ball campaign.

Vodafone Ireland, official sponsor of the Irish Rugby team, rolled out their "Ireland's Ball”  campaign ahead of the team’s departure to Japan. In partnership with Gilbert, Vodafone has created a world-first ball grip that features the fingerprints of 32 people representing the 32 counties of Ireland.

Today, Vodafone have announced the lucky fan to present the ball to the Irish team is rugby superfan and Portarlington Rugby Club player Alex McHugh.

Cloneygowan boy Alex (11), along with his parents, will travel to the Aviva Stadium on Friday for the handover with a full day of activities planned with Joe Schmidt and the Irish squad.

Speaking this week, his Mam Lynn recalled where his love of rugby came from:

"His older brother plays, and Alex did the Leinster Rugby camp here in Portarlington three years ago. He just loved it, and he's loved it ever since!"

"He plays with Portarlington Rugby Club himself. He's with the Under-12s at the minute and you couldn't make him miss a session."

"He asked Santa for tickets to rugby matches for Christmas, so we've been to quite a few matches since."

"Over the summer he's been re-watching the matches over and over. He knows all the players and the moves. He's just rugby mad!"

Representing Offaly on the ball is Rhode footballer and medical student Eoin Rigney.

Ireland’s Ball is a unique rugby ball that celebrates the diverse fabric of modern Irish society. The 32 people selected to contribute their fingerprint to Ireland’s Ball represent Irish rugby fans and the #TeamOfUs from every corner of the country.

The ball will travel to Japan with the team this September as a symbol of support on behalf of the whole nation.