OPINION: Offaly needs to turn shops into housing to save itself 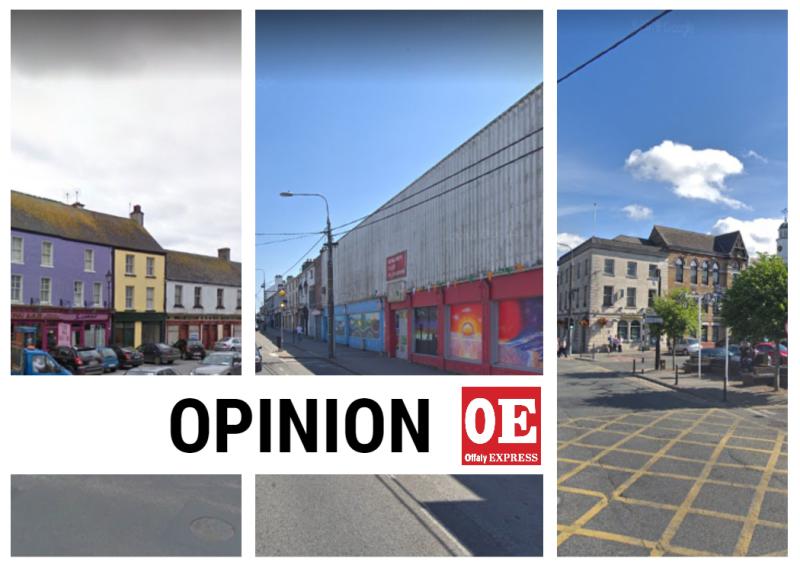 OPINION: Offaly needs to turn shops into housing to save itself

The notion of town-living is almost extinct in Offaly. The over-the-shop concept that so often formed part of town and council planning is a thing of the past, not least because many of those shops no longer exist. A series of factors have led counties like Offaly and particularly its secondary towns to wilt over the last decade.

These areas have been allowed to decay to a wasteland akin to a creaking railroad town on America's notorious rust belt. The only thing we're missing is the tumbleweed. Factories that once welcomed a bustle of workers have long fallen silent; the traditional bogs are winding down like the wheels of a weathered locomotive, trundling towards a dead-end.

If the country and this current government have one major issue, it is housing. Homelessness and the lack of affordable or social housing is the most pertinent issue of our time. In Offaly alone, over 1,000 people are on the social housing list and over 20 families are in emergency accommodation, children growing up in squalor.

Thousands of adult children are living under their parents' rooves well beyond their 20s as house prices spiral, and the dream of owning a home drifts out of reach for many. Those renting in a severely limited and expensive market are unable to save for a mortgage and while they're not on any list, these people are our hidden homeless.

Just 91 social housing units will be handed over to new homeowners in Offaly in 2019 but the council, understandably, cling to the fact that they're hitting paltry targets, albeit to save face. In truth, the problem is much bigger than Offaly County Council but the figures show one thing, regardless of targets - we are failing.

In rural counties like Offaly, there is another major issue that is both a symptom and a product of the former. Town centres have been decimated by a Celtic Tiger culture of edge-of-town development, both commercial and residential. People circumvent town centres to avoid traffic and businesses have died as a result.

Modernity has too hammered its nail into rural towns. Bank branches have been subsumed into online mechanisms; Post Offices have closed; people are shopping online in greater numbers with the ultimate outcome being the reduction in footfall. Town centres in Offaly are in survival mode. They fight for a reduction in rates while councils pull the other way to sustain maintenance and development in our communities, an attritional tug of war.

Commercial vacancy in towns and villages in the county is crippling. In the latest figures available on this issue from the GeoView Commercial Vacancy Report 2018, Offaly was listed as the sixth worst county for empty shops. Even starker was the position of Edenderry, a town located 45 minutes from Dublin, as the fourth worst town in the entire country.

25% of shop units in Edenderry are empty; more than 16% are empty in Tullamore, with 17% in Birr. With the issues of modern living mentioned above, the likelihood of many of these branches and buildings becoming businesses again is very low. No policy, no matter how inventive, will ever result in the 40 empty commercial units in Edenderry all becoming businesses again.

The latest figures from Offaly County Council estimate that between 1,000 and 1,500 properties, both residential and commercial, are empty across the county. There are various reasons for this; some owners don't want to become landlords while others may be tied up in legal turmoil, but many are simply waiting for a successful and attractive conversion scheme.

Another scheme, I hear you cry, and I too shuddered at the mere mention of the word, but hear me out. Yes, there has been a succession of failed schemes, and some are even still being bandied back and forth between the Department and local authorities. The Repair and Lease Scheme is a particular mess that has seen a dismal uptake in Offaly, as in other counties.

How do you address a housing crisis and a commercial vacancy problem with one fell swoop? You take the empty shops that are never going to have a name over the door again and convert them into social and affordable housing. By doing so, you put people back into town centres where they are needed to sustain small businesses. Essentially, you put the heart back into rural towns.

The logistics of such a solution, whether it takes the shape of a scheme for property owners, or by way of compulsory purchases, are hugely complex. It would take some wrangling but in the interest of the common good, the endeavour from our councillors and TDs to achieve it should be unwavering.

Without such a move, we are forced to ask ourselves the question: what is the alternative?