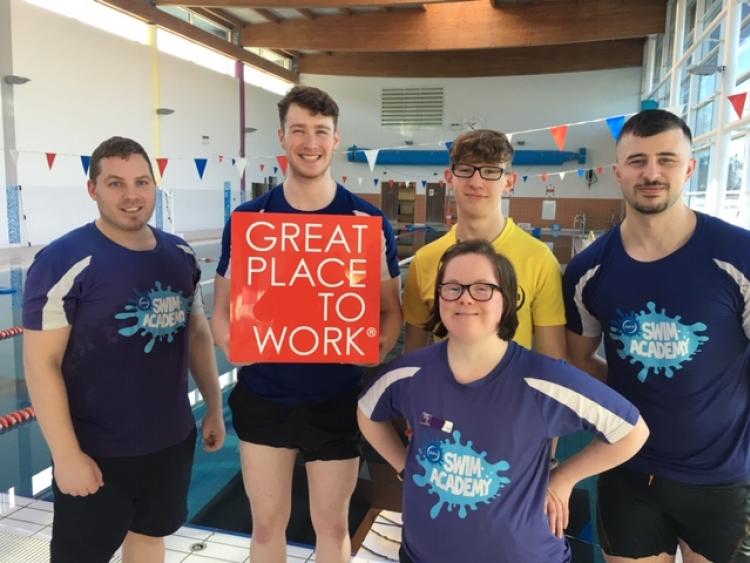 The Aura Holohan group, which included Aura Leisure in Tullamore, has been ranked in the Great Place To Work top 30 Best Workplaces for the third year in a row.

It is the only health and fitness company to make the list, and as one of the smaller companies in the category, the group were absolutely delighted to have finished strong, coming in at number 17, against some of the most successful multi-national companies out there.

The Aura Holohan team were presented with the award at the annual Great Place to Work Best Workplaces in Ireland Awards at the Clayton Hotel on Burlington Road, Dublin on Wednesday, February 27.

Great Place to Work Ireland assess all companies through a robust ‘Trust Index’ employee survey, a thorough ‘Culture Audit’ and an assessment of their policies and practices and their approach to managing and engaging people.

Speaking at the event on Wednesday, Gar Holohan, Executive Chairman of the Aura Holohan Group commented, "Our USP is our people. You cannot have engaged and loyal customers if you don’t have engaged and loyal staff. We are on a mission to tackle obesity in Ireland and to help people live healthier and happier lives, and we need our people to be ambassadors for this mission. That is why we put a huge amount of our resources into focusing on our people to make it a ‘Great Place to Work’ which in turns makes it a great place to be for our customers on their health journey."

The Aura Holohan Group is one of the largest employers in the Irish leisure sector. The brands within the Group include Aura Leisure which has 10 leisure centres nationwide, Anytime Fitness, which has two clubs in Dublin, DKIT Sport (Dundalk) and the support office in Dublin where they also operate Holohan Leisure Consultancy.

"The working partnership between Aura Tullamore and Offaly County Council has been a key driver into achieving the centre's success to date which began operating in 2008 and since the start of 2019 is currently under the operations management of Monica McGuirk who previously worked at Aura Dundalk and DKIT Sport," a statement read.

Staff member, Katie Troy who recently won an internal GEM Award in February has been all over the world representing Ireland at swimming including being part of a team in Truro, Nova Scotia in Canada for the World Down Syndrome Swimming Championships in 2018.

Katie said her Aura journey began back in 2013: "I loved swimming and asked could I volunteer to help out in Aura Tullamore during swim lessons. The staff were very helpful in helping me learn techniques on how to help the small kids."

"In 2014, I completed my lifeguard course and in 2015, I officially took on the role in Aura Tullamore as a leisure attendant and member sales representative. At Aura, I feel accepted and valued. Aura employs people with disabilities, and I feel that they are happy to have me here and I am delighted to be here. In Ireland 95% of people with Down Syndrome are unemployed. Only 5% have a paid job. I feel very lucky to be 1 of the 5%."

A native of Tullamore, Paul Coates started his Aura Journey doing work experience in July 2011 and continued on in a part-time cleaning role for 12 months while completing an internal lifeguard course followed by a swim teacher course.

Paul then became a full-time leisure attendant in 2014 and when a relief duty manager position arose for maternity cover, Paul undertook the role as well as health and safety representative for Tullamore. Paul then went on to become a full-time duty manager and undertook further internal training and completed his pool plant course and continues as the sites health and safety officer. Paul won an internal company GEM award for "we believe small changes can make a big difference'' and is an invaluable member of the team."