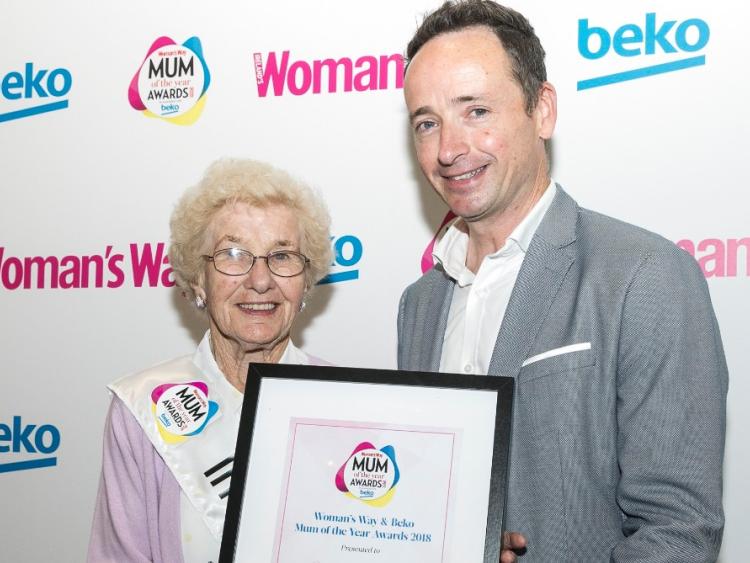 Geashill mammy, Heather McGrath, has been crowned The Woman’s Way & Beko Inspirational Mum of the Year 2018.

Winners were announced at a special ceremony at The Gibson Hotel in Dublin. A tireless fundraiser in the local community, Heather not only raised her own family but also helped eight other family members after their mother passed away. Her cousin Bernie Gorman, who nominated Heather said, “This lady has a heart of gold and never stops.”

The Mum of the Year Awards, now in its 15th year, is the largest and most recognised national awards celebrating mothers across Ireland. As well as the overall Mum of the Year, this year, Woman’s Way and Beko also recognised the outstanding achievements of mothers within a number of new categories, to reflect the dynamic and multi-faceted roles that so many modern mothers in Ireland now play.

These new categories sought to recognise first-time mothers, ‘mumpreneurs’ who have made a difference in the world of business, mums who reach out through social media to create and connect communities, as well local heroes working tirelessly in their local community.

Broadcaster and adventurer, Nancy Ashmawy, was also announced as Woman’s Way & Beko Celebrity Mum of the Year. On hearing of the award Nancy said, “It’s unreal really because I’m just a very ordinary mother, that’s how I see myself. I think mammies are mammies, whether you’re an Italian mammy or an Irish mammy.”

Shane Kelly, Sales and Marketing Manager, Beko commented: "We are delighted to be involved in The Mum of the Year awards for the third year in a row. As a brand that strives to give the gift of time through new product innovations, we understand the multiple roles that modern mums juggle between on a daily basis and how each and every entry is to be commended. We’d like to thank all of the finalists for sharing their incredible stories and congratulate them on their outstanding achievements.”

Áine Toner, Editor, Woman’s Way said: “We were overwhelmed with nominations for our new categories which demonstrate the big and small things women are doing throughout Ireland to make a difference to their lives and those of their families, friends, communities and even people they’ve never met. Showing true resilience, patience, confidence and support, our 2018 winners are some of the country’s finest ambassadors and we are delighted to partner with Beko in celebrating them and their efforts.”