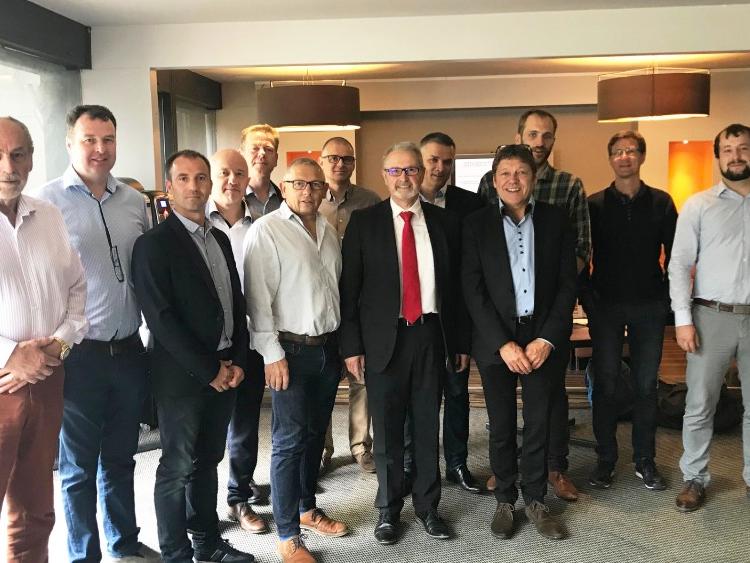 Grant Engineering based in Birr, recently held its inaugural sales meeting in Chambery, France having expnded its operations onto the continent.

Grant France SAS was launched after an 18-month period of research and development led by Stephen Grant.

With the ongoing uncertainty around Brexit and the loss of competitiveness in the UK market because of the depreciation of British pound, Grant has been working on entering new European based markets.

For the past 18 months the research and development team has been developing and localising products to suit the French market. During this time the Grant France team have been setting up sales, distribution, training, technical and commercial operations.

Having developed a suitable product range for the French Market, the next milestone has been holding an inaugural sales meeting with the Grant France sales team. During this event the sales team of nine went through intensive technical product training, covering products unique selling points, installation and service training.

The current sales team of nine cover most areas in France. One difference between the French and Irish market is the type of fuel used; in Ireland we use kerosene, but in France they use Gas Oil. It is due to this fact that the products must be customised to the French market.

Grant France SAS is in the process of setting up its training academy and in the coming months will hold training courses for French installers and service engineers in Chambery. As part of developing the market there will also be inward buyer visits to visit the manufacturing plant in Birr over the coming months.

When the Brexit referendum resulted in the withdrawal of the UK from the EU, Grant Ireland had completed two thirds of its expansion plan that it had announced three years ago. On foot of the shocks results of the British vote, the final stage of expansion was put on hold.

However, due to the strategy of developing new markets in the Eurozone and the high risks associated with this, the company decided to complete the last phase of the expansion plan and develop a state of the art R&D centre, a customer service centre and a new training academy at its site in Birr.

Work is ongoing presently with an expected completion date of early 2019.