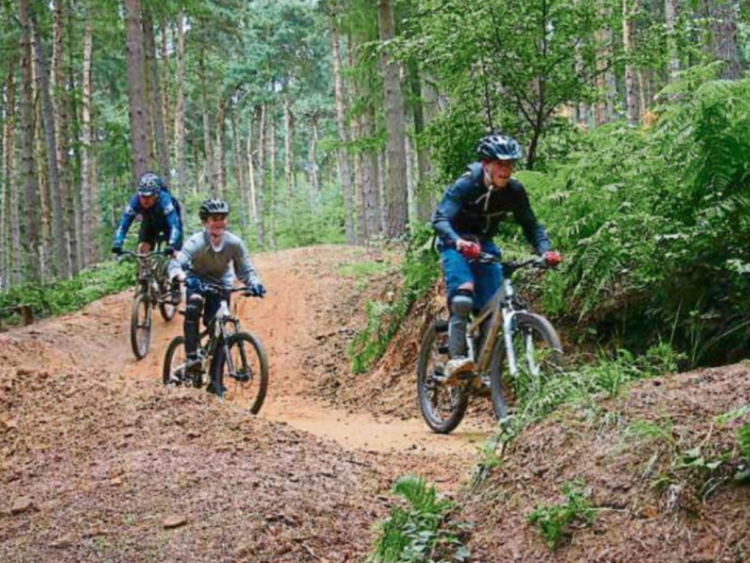 The wheels have officially been set in motion on the Slieve Bloom Mountain Bike Trails which has big tourist jobs potential in Laois and Offaly as well as creating a big new local amenity.

Coillte is building the trail in partnership with Offaly and Laois County Councils. It is set to cost €5 million. Laois/Offaly TD and Minister for Equality and Justice, Charlie Flanagan, turned the sod on the project on Friday, April 27.

The first phase of a project which, when completed, will comprise of just over 100km of trails.
Phase 1 will involve the construction of 35kms of off-road, cross-country cycling trails on Coillte-owned forest lands, with approximately half in Co. Laois at Baunreagh and half in Co. Offaly at Kinnity.

Funding of €1m for the first phase, which was in addition to €195,500 for rural trails and cycle-ways projects under Measure 2 of the Outdoor Recreation Infrastructure Scheme in County Laois, was announced by the Minister in July 2017.

Metro Construction have been appointed to build phase 1 working closely with Coillte and the  Laois and Offaly County Councils to ensure a trails product of international quality.

Phase 1 will consist of 35km of mountain bike trails (MTB), split with approximately half in  Laois at Baunreagh and half in  Offaly at Kinnitty. Funding of €1m under the Department of Rural & Community Development’s 2017 Rural Recreation Scheme was secured by Offaly County Council, on behalf of Coillte as the lead agency and the two County Councils as partners.

The two County Councils are providing over €200,000 each in match funding to assist in bringing this very important tourism and amenity project to fruition.

Planning permission is in place for a National Scale MTB centre in the Slieve Blooms which, when complete, will see over 100kms of trails in the two counties, linked across the top of the mountains by an on-road section at Wolftrap Mountain.

The flagship project for the Midlands Region is promised to create sustainable jobs as mountain biking is a year round activity and not weather dependent.

“The Slieve Bloom national scale MTB system, when taken in conjunction with the existing very successful trails system in Ballyhoura on the Limerick / Cork border, at Ticknock in the Dublin Mountains and the proposed trails system at Coolaney, Co. Sligo will make Ireland very attractive as a destination for international mountain biking tourists," he said.

"I hope that the centre will present villages and communities on both sides of the mountains with opportunities for rural tourism enterprise and employment," he said.

Further phases are planned in order to complete the trails system as soon as possible, but are subject to funding being allocated. The entire project will cost approximately €5m.

“The project could not have progressed to this very exciting stage without the very close co-operation between the two Local Authorities and Coillte and we at all stages noted the tremendous support for the project from the local community and elected representatives on both sides of the mountains," she said.

It is expected that the project will give a major boost to existing and new local businesses and it is important that accommodation packages, food and drink offerings and links to the many other attractions on both sides of the mountains are developed in tandem with the trails.

The MTB project will also compliment the many existing walking routes, road cycling activity and the festival activities in the Slieve Bloom Mountains which are located only just over an hour from both Dublin and Limerick and approximately 2 hours from Cork.

Mr de Forge, project manager for the trails development hopes that phase 1 will be open in October 2018.

Further details will be published nearer the time and no access will be allowed until the trails are officially opened, to allow construction activities to continue safely.

Long term, it is planned to build a trailhead visitor building with toilets, showers, bike hire, bike wash and a coffee shop at Baunreagh Co. Laois, while in Offaly it is hoped that local businesses in Kinnitty village will provide all the services to make the trails a seamless and enjoyable tourist attraction and a buzzing amenity and tourism hub. There is provision for a trailhead building just outside Kinnitty on the Clonaslee road should it be necessary in the future. Once fully built, the trails could attract 80,000 users per annum and at this level the direct expenditure could exceed the cost of construction in less than two years.

The planning permission for the project comes with very stringent environmental conditions, most importantly the requirement to take careful account of the nesting locations of the hen harrier, which is protected under EU law. The majority of the Slieve Blooms is designated a Special Protection Area in recognition of the important population of hen harriers in the area, 5% of the national total.

The upper reaches of the mountains are also designated as a Special Area of Conservation and at an early stage Coillte having consulted with the National Parks and Wildlife Service decided to avoid this area entirely.

The sod was turned on Phase 1 by Mr. Charlie Flanagan, Minister for Justice and Equality.

"This is a really special occasion for me,  because I know that when this trail is constructed it is going to bring to literally thousands of people the sort of pleasure and thrill I got, when, as a boy, I cycled in these very mountains.

The Minister went on to speak about his current love for walking in the area before drawing attention to the benefit of the project to the region.

"The trail we are turning the sod on, represents the biggest investment in Tourism, in both Laois and Offaly in recent years.  Outdoor recreational and adventure tourism is a key growth sector worldwide and it has been identified as a priority for Irish tourism.  The Irish tourist industry is of course booming – it had record year in 2017 with overseas visitors up by 3.7% to the end of November. And we are looking forward to this trail playing its part in that growth in the years to come," he said.