Offaly counts the cost in the aftermath of Hurricane Ophelia

The storm raged for 12 hours 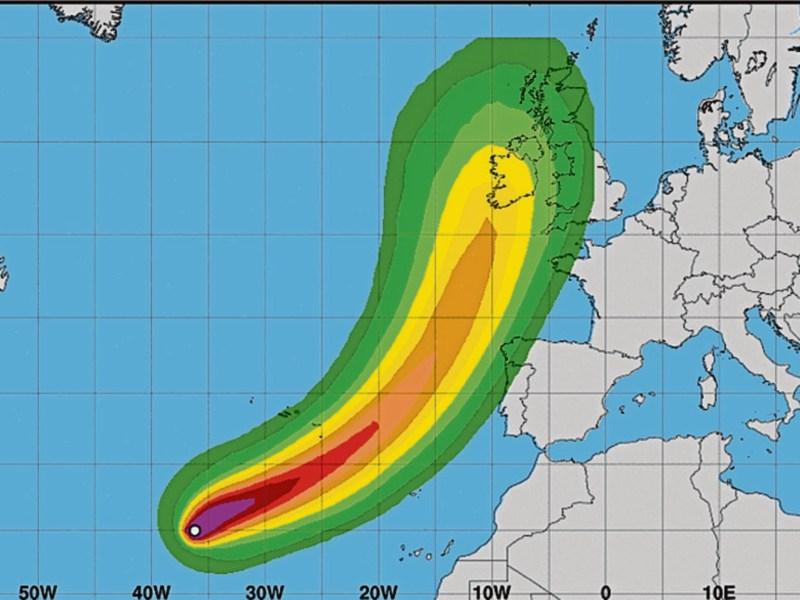 Ireland counts the cost in the aftermath of Hurricane Ophelia

Offaly is counting the cost this morning after Hurricane Ophelia battered the country on Monday.

The county's Major Emergency Team, involving emergency services and council staff, is orchestrating the response and clean-up after the deadly storm. Dozens of roads are blocked or partially blocked in Offaly as staff deal with loose power cables, fallen trees and debris from damaged property.

"Please be extremely vigilant if you are out and about in the coming days as trees, electrical power lines and other structures may be unsecure and hazardous. People should be particularly careful around farm yards, warehouses, industrial areas and derelict buildings," the Offaly Major Emergency Team said.

Nationwide, up to 240,000 people are still without electricity as a result of Ophelia. ESB crews were working last night as the storm passed and power has been restored to many homes, bringing down the numbers affected from a peak of 360,000. Crews will be out today and in the coming days to restore power, a process that is somewhat complicated by structural damage and debris. ESB Networks have warned that it may be eight days before everyone has seen their power restored. Follow live outage updates on www.esb.ie.

Meanwhile, the Operational Planning and Emergency Manager at Irish Water, Katherine Walshe, said around 92 schemes are at risk, serving 360,000 people, if power is not restored in some areas before lunchtime. "This impacts customers where storage isn't available in the reservoirs or where the water quality cannot be guaranteed," she said. This issue is predominantly affecting the south of the country, although there are reported water outages locally throughout the country. Burst water mains also pose a flooding risk in local areas. The majority of problems for Irish Water are in counties Cork, Kerry, Wexford, Waterford, Galway, Leitrim, Westmeath and Cavan. Find out more on www.water.ie.

Hurricane Ophelia took a considerable human cost, claiming three lives and endangering hundreds more. A woman died in Waterford after a tree fell on her car, while a man was killed in a similar incident in Dundalk. A third man passed away in Tipperary in an incident with a chainsaw as he attempted to clear a tree from a road. There were numerous stories of near misses with trees falling on occupied cars around the country. The HSE has warned that A&E departments will be busier than normal today as hospitals resume full duties, including outpatient procedures, which were cancelled yesterday.

On the transport front, most services, including Irish Rail and Bus Eireann, have resumed, but they are warning of running delays caused by fallen trees and lines on routes. They have urged people to check with their provider before travelling and to expect delays as the clean-up continues. A number of Irish Rail services, mostly between Galway, Limerick and Dublin, are running at reduced capacity. The Luas remains out of action until 12pm today when a meeting will be held to discuss its return to service. Hundreds of flights were cancelled yesterday but Dublin Airport is now running a full service, although passengers are advised to check with their airline before travelling to the terminal.

The timing of the storm on Monday coincided with low tides in most areas, reducing the risk of serious flooding. There is issues with flooding locally due to burst water mains and pipes, but coastal flooding has not become a problem as a result of Hurricane Ophelia. Flooding alerts in places like Limerick were cancelled as Ophelia passed over quickly without significant sea issues. Spot flooding has been reported in some areas, predominantly along the South West coast, and caution is advised in those areas with sitting water on some roads and walking routes.

The Department of Education took the decision on Monday evening to keep schools closed again on Tuesday. This decision caused widespread disruption to parents who were due back at work, but the Department justified the call by suggesting it gives schools a chance to assess the damage/power/water situation before taking in hundreds of children. It is expected that 90% of schools will re-open on Wednesday but parents are urged to check with their child's school before travelling. Structural damage has been caused to some school buildings, mostly in the South West, posing a potential health and safety risk to pupils and staff. Most third level colleges opened on Tuesday and are now set to remain open in the long-term without disruption.

The Irish Times reported on Tuesday morning that Ireland may yet suffer more stormy conditions at the weekend. Weather charts show that Storm Brian is tracking towards Ireland and the UK, bringing with it winds of up to 140km/h. You can keep up to date with all weather updates and warning on www.met.ie.