OPINION: Pedestrianisation in Edenderry is only a good idea if you incentivise business

The works are causing controversy 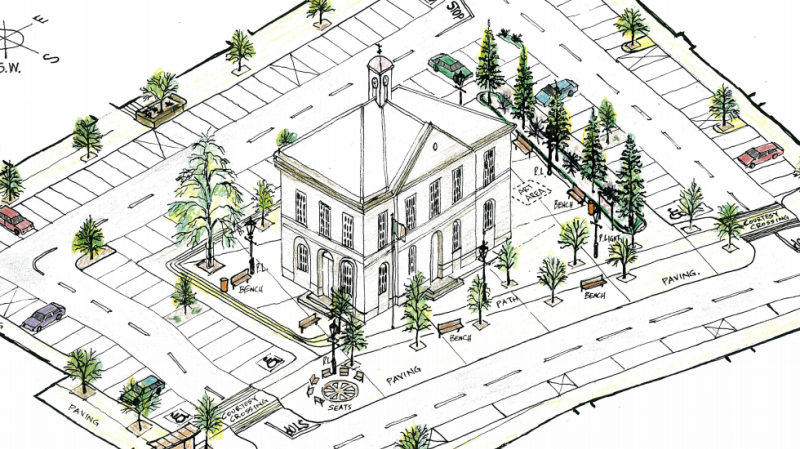 There has been much consternation in Edenderry in recent months over the planned development at O'Connell Square, which will see the number of parking spaces reduced, and include the adding of additional trees and benches to the area. The work got underway on Monday, October 23.

SEE ALSO: PICTURES: Work begins on controversial works at the Square in Edenderry

This development is part of the government's Urban Village Renewal grant scheme, through which €100,000 has been allotted to Edenderry. There are currently 110 parking spaces in the Square in the town, and the works will reduce that by 11 to 99. That is hardly a talking point as the Square is rarely ever full in terms of parking, but the thought behind it is ambiguous.

The plan marks a move to further pedestrianise Edenderry, in line with the work done in the mid-2000s when the length of the traditional market street was upgraded with cobbled paths and trees. Many residents and business people would suggest this was a downgrade rather than an upgrade, and there are a number of reasons why it didn't work.

That work, in fairness, coincided with a national recession, which in itself reduced the amount of footfall on shopping streets everywhere. However, in terms of planning, Edenderry didn't get any favours, as that streetscape work was being doing against the backdrop of serious outward movement of supermarkets to the Dublin Road. Currently, perhaps four of the five biggest businesses in the town are located there - Lidl, Aldi, Tesco and Heatons, while the other big one, Dunnes Stores is also off the main thoroughfare in the Downshire Shopping Centre.

On the one hand, planning decisions wanted to put footfall on the council's new cobbled footpaths in the centre of Edenderry, while on the other, they were putting people in their cars and sending them to the outskirts of the town. Paid parking further put the boot into the businesses in the town, as people were even less likely to stop and shop on JKL street, bar to run into the bank or Post Office.

So, the council, for all their bluster about this latest development, have come to the decision through seriously flawed logic. Earlier this year, a rate re-evaluation process took place, and some businesses will see an increase in their rates. You can put all the lovely benches, cobbles and trees you want in the Square, but if you don't incentivise business to be there, you're going to bury the town further.

A report earlier this year revealed that Edenderry has the country's worst commercial vacancy rate, and the number of boarded up premises on JKL Street is truly shameful. In fairness to the Edenderry Tidy Towns committee, they are working with the schoolchildren of the town to make these premises look more presentable with unique artwork, but in real terms, and in all honesty, Edenderry businesses haven't seen a marked improvement in trade.

The ideal of extensive pedestrianisation has some merit, but only if you make it easy for business to flourish within it. The idea that one, if not more, of the supermarkets can't be sustained on JKL Street is nonsense. People will argue traffic would be affected by such a move, but urban areas with far larger populations have made it work, and at the end of the day you need people driving to the centre of the town, not through it. In Rathmines, a bustling suburb of Dublin, Lidl and Aldi operate on the main road directly opposite one another with off-street parking servicing both. Traffic is no worse there than it would be if they weren't there.

With off-street parking, the likes of one of the German chains (Lidl and Aldi), or Tesco, could return to JKL Street, where it once was, and where people actually walked JKL Street to shop. When Tesco, and its predecessor Quinnsworth, operated on the main street, the rest of the town did a roaring trade.

Is it not possible to offer one of the supermarkets a cut-rate deal to do business in the town centre itself, invest in off-street parking, and reduce the rates for businesses on JKL Street so as to incentivise them and others to set up there?

Once people start seeing footfall on JKL Street again, they will want to do business there, and perhaps some of the empty units would be filled.

If that was the case, then the works currently starting in the Square would be an exceptional idea. Perhaps then, more cafés, restaurants and other businesses could be sustained in the Square, especially if the new library/theatre could also get a prominent home there.

There needs to be more joined-up thinking to make this happen. At present, from what I hear, businesses don't get much incentive to set up operations or continue to operate on JKL Street, while at the same time, €100,000 will be spent on some trees and benches - that's the reality of the reaction to this work in O'Connell Square.

It is important to say that this money is a grant, and is not ratepayers money, and therefore cannot simply be redirected to fixing paths or roads, and so on. However, I believe it is in fact a good idea, but only if some of the things outlined here happen first. There is no point flogging a dead horse, and definitely no sense in putting that horse or any other before the cart - something the council seem intent on doing.

You have to make it easy and attractive for business to flourish there, and if you want an answer to whether or not that is currently the case, take a walk down JKL Street and count the empty units.