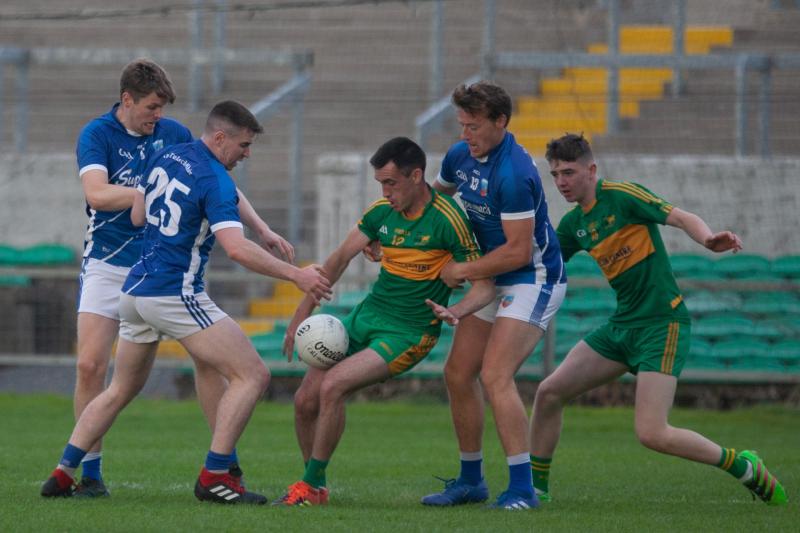 Michael Brazil, second from right, in action against Rhode.

IT is a very exciting time for Tullamore football with the progress of a new breed of excellent young footballer creating a buzz of excitement and anticipation in the town.

Joint captain of the Tullamore team that is facing Rhode in the Senior Football Championship final on Sunday, Michael Brazil has watched the emergence of the young talent with great interest. Three players have made the team from the 2020 minor champions, John Furlong, Harry Plunkett and Cormac Egan, though a hamstring injury has ended Egan's camapign.

Furlong and Egan were outstanding as Offaly won the All-Ireland U-20 Football Championship in 2021 with Oisin Keenan-Martin playing a pivotal role in defence while Ciaran Egan made a fine contribution off the bench, having started the first first couple of games.

Brazil described the young talent as a “breath of fresh air” to the club and the older players last week, though he is under no illusions about the task facing them on Sunday against the champions. Now thirty years of age and playing senior football since 2011, the former Offaly player won his only Senior Football Championship medal back in 2013.

Back then, you probably expected to have more than one medal by now?

“It is a long time playing football for one medal. Listen you get what you put in. Years gone by we thought we were doing the right thing but maybe we weren't. Just some years we thought ourselves unlucky with injuries but we weren't good enough to get over the line.”

“The run of things with us, we didn't know what was ahead of us at the start of the year, limping through the groups, trying to get a bit of form, coming into quarters or semis it doesn't always work. In previous years we neglected the league with lads with Offaly. We probably haven't put enough emphasis on it. Maybe with Covid and lads at home, it is different now. Niall (Stack) really put a big emphasis on the league this year. It's is standing to us with panel numbers and giving young lads a bit of experience with senior football whereas in years gone by we didn't utilise that enough.”

How important has your young talent and the injection of players out of minor to Tullamore?

“It's been huge. It's a great lift for everyone. Even for the county seeing them win the All-Ireland, the boost it gave for GAA and football in Offaly was absolutely massive and especially when we had four on the panel and Harry (Plunkett) probably would have been there. They really are a breath of fresh air. Them lads are in their 20s and they are a real addition to us. It's something we haven't been getting year on year and all of a sudden we got them, especially them three lads out of minor. They are three exceptional talents. They have given the whole panel a boost. It's great to have them.”

As one of the more experienced payers do you do a bit of talking to them or leave them alone?

“You try to talk to them and guide them if they need help. I'm that much older now I could be that bit out of touch with them. You try and guide them. They have their heads well screwed on. There's none of them you need to pull aside and have a word with. They're a great bunch. Sometimes even playing with John Furlong and you could get a look from him, c'mon and lift your performance, you're not at the races here, I don't need to be telling you, you should be the one leading me. The likes of him and Cormac (Egan) they have that mentality and they are always here to improve and get better. They're well able to look after themselves.”

It's great for a club to have that talent coming in, they are elite players?

“From what I could see the lads are sound out performers, especially Cormac and John. After they went out of minor they fitted into U20 seamlessly. It's great to have them. It's probably rare enough for a club to get one or two minors to come through. Look at my own minor group that came through I think there's only two of us still playing, myself and Kevin O'Brien. Johnny (Moloney) is the only one from his age group. You don't hold onto a lot of these players but these lads seem to be really clued into what it takes.”

We have all seen outstanding underage players drift away in Tullamore. Why does it happen in Tullamore more than other clubs?

“I wish I knew. In fairness they've put a good underage programme together here and maybe have it back on track. There was a gap before that when we weren't exactly winning. In my and Johnny's age group we won a lot but you lose a lot of players in that space of time whatever it is. I don't know if it's the draw of other sports, maybe life, maybe a big town team. Maybe it's soccer and maybe lads have a more fondness for that than the GAA.”

You probably played a bit of everything yourself, you first played rugby?

“Yeah myself and Johnny first played rugby until after finishing U-21s with Offaly. They have a great club up there and I can see the draw. They really look after players up there. In fairness Tullamore have really have their stuff together. They have academies and stuff and it's great to see.”

Tullamore were in the final last year but look in much better shape this year?

“Yeah. Last year we lost two group games and scraped out of the group by the skin of our teeth. We got over Ferbane on penalties. This year they put more focus on the league, to actually perform in the league and get the team playing the way Niall wanted us playing and developing a few lads through that. We were in good form coming into the championship but then we have had two draws in the group. We probably had a few chances against Edenderry that we could have took but we didn't. It is probably the first time I can remember Tullamore topping the group. Usually we are scrapping through hoping for the best and then we got over Ferbane. But there's a a lot to improve on, they were understrength, missing players. It might have been a different game if they had their full team. We still had to go out and beat them and we did that and now we're looking forward to Sunday.”

Last year ye were close to Rhode at the wind up but really they were by far the better team?

“Yeah they were far the better team on the day they just showed that know how especially with the weather. I think coming into it there was nothing but good weather and I think there was torrential rain that day. It was a horrible day especially not to have dressing rooms. Unfortunately it was not meant to be and they showed all their experience.”

Rhode have looked a bit vulnerable this year but still their record in finals is excellent?

“I don't know how vulnerable they look. Durrow beat them in the first round. Rhode were a bit understrength but after that they seemed to have got going. They just know how to get it done. They are an exceptional team, they are well drilled, they plan to their game plan and they stick to their game plan. They just have it perfected.”

How badly to Tullamore need this as a club?

“It would be a great boost. On the back of the underage success it would be massive for the club, for the players. It's a long time since 2013 but we're under no illusions as to how big a task it is. Rhode have dominated Offaly football for the last 20 years. Anyone you talk to outside the county they ask you how are Rhode doing. They're the kinpins of Offaly football. For us to win even one would be a big lift for the club and that will keep younger players interested.”