Edenderry knocked out as Ferbane turn the tide after dreadful start 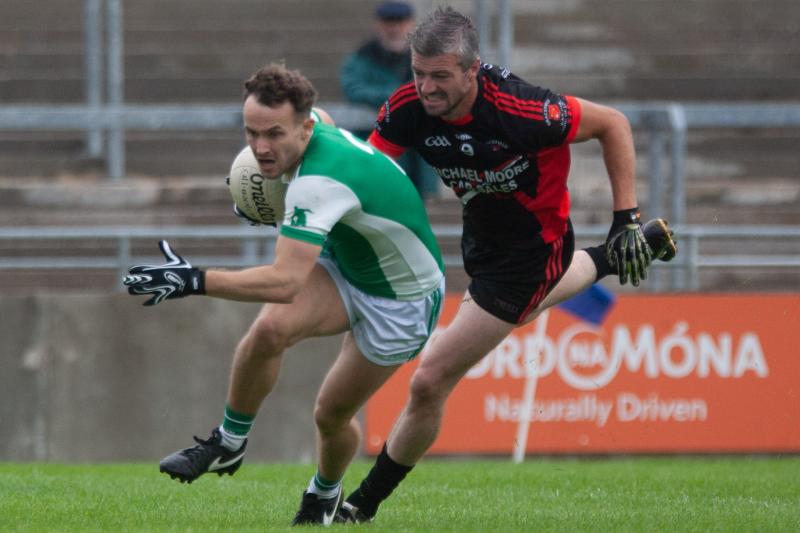 WHEN Edenderry led an engrossing Tullamore Court Hotel Senior Football Championship semi-final by 0-7 to 0-1 after just ten minutes, no one could have predicted that Ferbane would not only win but would do so quite comfortably.

It was a sensational win for Ferbane, who were roasted alive in that opening Edenderry salvo and it was difficult to see how they could turn things around. They did turn things around, however, putting in a very good, accomplished and honest second half display to turn a three point deficit into a convincing five point win.

There were plenty of talking points here. Edenderry lost their ace forward, Cian Farrell to a worrying looking knee injury after just seventeen minutes. Farrell had been giving Ferbane ferocious problems but had been in early trouble with his knee, getting treatment once before going down a second time and limping off. Hopefully it won't be something as serious as a cruciate but Farrell's lost had a profound impact on this game. With him gone, the Edenderry attack was rudderless and scoring became very hard work for them.

Ferbane then lost their marquee forward Joe Maher to a straight red card in the 28th minute. Maher was sent off along with Edenderry full back Eoin Dunne after an off the ball tussle that left Dunne on the ground. Red was shown by referee Fintan Pierce after he consulted with his umpires – Edenderry finished the game with thirteen men after wing back Colm Byrne picked up a second yellow card a minute from time but by that stage, the game had slipped beyond their grasp.

Maher's loss was as big a blow to Ferbane as Farrell's to Edenderry. He had been playing very well, orchestrating their revival from that dreadful start but unlike Edenderry, Ferbane had other players who stepped up to the plate. Behind by 0-10 to 1-4 at half time, Ferbane really upped the ante in the second half with the brilliant Cathal Flynn, Ronan McGuire and Kyle Higgins stamping their authority on the game.

It was a huge win for Ferbane. Scoring machine, Cian Johnson is still out with a groin injury, Oisin Kelly is getting a cruciate operation next week and another forward, Paddy Clancy was suspended. To win without all those forwards was a serious achievement and Ferbane will be absolutely thrilled with their win and their second half display.

Edenderry were brilliant in the first ten minutes. They ran Ferbane ragged and with Cian Farrell and Alex Kenny running amok in their attack, they were full value for that 0-7 to 0-1 lead. There had been early warning signs for their defence as Joe Maher tapped over Ferbane's opening point in the eight minute when he could have put the boot down and went for goal. In the 12th minute, Ferbane had the ball in the Edenderry net with Jack Clancy finishing after good work by Ronan McGuire.

Cian Farrell was gone a few minutes later and Edenderry never regained any real mometum or form again. They had the wind on their back in that first half but a 0-10 to 1-4 half time lead left it wide open, even though Edenderry were still the favourites at this stage.

Ferbane got motoring from the start of the second half. Quick points from Kyle Higgins (two, one free) and Ronan McGuire had them back on terms by the 37th minute. Sean Doyle (free) and Higgins exchanged points before Ferbane struck for two goals in the space of a minute in the 42nd minute. Ronan McGuire got the first after Kyle Higgins did very well and moments later Jack Clancy got in for his second after good approach play by Ciaran McManus.

Suddenly Ferbane were 3-8 to 0-11 clear and the game was theirs to lose. Edenderry tried hard to salvage it as Ferbane invited them on by pulling players down the field. Sean Doyle got a free and Alex Kenny had a goal shot deflected out for a “45” that sub goalie Shane Cummins sent wide. Leon Fox got a huge free for Ferbane but they let Edenderrty off as Kyle Higgins (free), Ronan McGuire and Darragh Flynn had poor wides.

Doyle's free brought it back to four points, 3-9 to 0-14 in the 54th minute. Edenderry were still there but they couldn't get it back to a score as they ran out of steam and Ferbane finished strongly with two Darragh Flynn points for a fully deserved win.

Ferbane showed tremendous character to get an against the odds win. Cathal Flynn, Kyle Higgins and Ronan McGuire were all immense for them when it really counted while Leon Fox showed great leadership at centre half back and it is a season changing win for Ferbane.

Edenderry will be bitterly disappointed at their second half surrender. They were magnificent in the opening ten minutes but really struggled after that and have no complaints at all at their defeat. They also really missed absent defender Adam Mahon and a season that promised much ended very tamely. Sean Pender, Lee Pearson, Jordan Hayes, Cian Farrell and Alex Kenny had good spells for them.

Cathal Flynn (Ferbane): Cathal Flynn had a fantastic game for Ferbane. This was his best game of the championship for them as he used his pace well, took on opponents and gave some top quality, intuitive passes. He didn't score but he was a huge factor in their win. His tussle with his fellow county U-20 star Lee Pearson was a highlight of the afternoon – Pearson is developing into a superb man marker but Flynn proved a real handful for him and won this battle overall. Ronan McGuire was a contender as he had an excellent game in their defence while Kyle Higgins came good in the second half.

Cian Farrell's loss to injury in the 17th minute had a profound impact on this game. Edenderry were not the same team with him gone. His knee injury looked worrying and everyone will be hoping its not a cruciate or something simililarly serious.

Fintan Pierce refereed the game well, though there were plenty of talking points. He sent Joe Maher and Eoin Dunne off after talking to his umpires. Ferbane were annoyed when he penalised Joe Maher for not taking a mark quick enough but the forward may have delayed too long in taking his kick. Sean Doyle thought he had won a mark in the second half but the kick into him was from inside the forty and it wasn't a mark – whether he over carried or not was debatable. Colm Byrne's second yellow card was soft but Pierce got the vast majority of decisions right.

Ferbane's win and their achievement in winning with so many influential forwards out.

The O'Connor Park pitch was in top shape and a decent crowd enjoyed the game.

Ferbane play Durrow or Tullamore in the semi-final while Edenderry's year is over.