The Man Behind The Wire 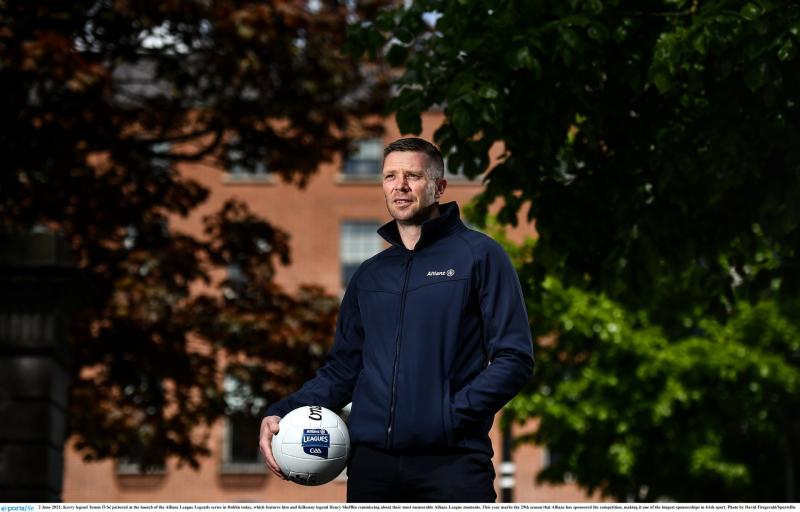 Tomas O'Se's appointment in Offaly sends out a powerful message.

THE appointment of Kerry football hero Tomas O'Se as a coach to the Offaly senior footballers for next year was the big news in the Offaly GAA world last week.

O'Se's appointment represented a public relations coup for the Offaly GAA County Board and chairman Michael Duignan. It looks good and it has gone down very well with Offaly GAA supporters.

It paints a very positive picture for Offaly GAA and gives further evidence to the impression that Offaly is moving in the right direction, taking steps forward.

O'Se will now become a key part of the Offaly senior football management team, a welcome addition to the manager John Maughan and the coaching back up already in place.

The Kerry great is showing how seriously he is taking the Offaly role by giving up his work as an RTE analyst and some other media work to concentrate on it. He hasn't much managerial experience at inter-county level but he will bring a lot to the table. As a player who achieved so much during a glorious career, the players will listen to him and look up to him. His word and what he says will carry weight.

He clearly has a strong personality, he clearly knows the game and he will be an important part of John Maughan's support squad as a coach and a selector.

It reflects very well on Offaly that a man of O'Se's stature is willing to become involved in the county. He is friends with Offaly GAA chairman Michael Duignan, who is also an analyst with RTE, and this is how the approach happened but that friendship alone could not convince a man to get involved with a sinking ship.

Having won the All-Ireland U-20 Football Championship in such sensational style this year, there is clearly potential in Offaly football. There is an outstanding array of talent emerging onto the scene and the timing of their introduction is crucial. You don't want to introduce them too soon but equally you don't want to hold them back either. The experience players get at 20-21 years of age can play a pivotal part in the footballers they become and holding them back for too long can be as detrimental as playing them before their time.

It is a delicate balancing act and boils mainly down to the judgement of management but it is clear that the Offaly team and panel would benefit from a shake up in personnel. They have made small but steady progress under John Maughan's management. Maughan has steadied the ship, he has given players an insight into what it takes and the attitude needed to be county footballers. He is part of a process that is going on at all levels in Offaly football and the senior team has improved under his watch.

There will be changes next year. Eoin Carroll has opted to take a year out and you can't blame the Cappincur man for taking this decision. At 27 years of age, he still has a lot to offer and should play county football again after he returns from Australia. His body has shown the effect of years of hard work, hits and trauma in the past year and the year out may rejuvenate him both physically and professionally. From a personal point of view, there may never be a better time to take this break – his responsibilities are certain to change as he gets older and he has given tremendous service to Offaly for the past few years.

Peter Cunningham is going to Syria on an Army tour of duty for six months from October and the break may also do him good. The Bracknagh man has also given fantastic service and is one of Offaly's most important footballers. He looked a bit jaded this year as he searched for his best form and he may also get a new lease of life from being away – though it is not a break in the same sense as Carroll's as his is work related.

The absence of Carroll and Cunningham will create a window of opportunity for newcomers and it will give management a chance to try things.

Offaly are still at a comparitively low level but promotion to Division 2 of the National Football League last year was a huge step in the right direction. Staying up there won't be simple and it will be interesting to see what way Offaly perform but it is great to get up there.

O'Se's experience of playing at the highest level commands utter respect. His knowledge of what it takes will be a great asset to Offaly.

You can question the expense involved in running the Offaly senior football team– a manager from Mayo, a coach from Cork and if last year's personnel are back on board, a coach from Cavan and Dublin plus all the other expenses that must be met. Offaly's weekly bill for the senior football team during the season won't be simple but a lot of other counties are doing the same, and to a much greater extent in some cases. If Offaly don't match this, they will be left behind and every member of team management and back up staff is a key part of the picture, they all bring something crucial to the table. You can wonder how many coaches and back up are actually needed but it is working for the successful counties and Offaly are showing real ambition now.

What O'Se's appointment does in the short term, before the real evidence is uncovered during the season, is it sends out a very positive message. It sends out a great message to the county but also outside the county and this will assist in attracting personnel for other teams and in the future.

Offaly have struggled to attract high profile personnel from outside the county but that is changing. John Maughan had a proven pedigree as manager and while hurling supremo, Michael Fennelly is an managerial novice, his playing achievements meant that his appointment was a coup for Offaly.

O'Se adds to this, despite the fact that he is finding his way in the inter-county management world. With Shane Lowry coming on board as a big financial backer earlier in the year, it is now fashionable to become involved in Offaly GAA.

A lot of that is down to Michael Duignan and the new look County Board. This will follow on down the line and an inevitable spin off should be that it will also be fashionable to play for Offaly. That hasn't always been the case and it all paints a good picture of an ambitious county on the march, improving itself.

This week's answers are:

1 - Name the three brothers that were on the Offaly junior football team that lost the 1967 Leinster final?

2 – What was unique about Offaly's early league matches in football and hurling in 1970?

Answer – They beat the reigning All-Ireland champions in both – Kerry at O'Connor Park and Kilkenny in Birr.

3 – Which county registered the same score against Offaly in three All-Ireland championship matches in a nine year period in th 1960s and 1970s?

1 - What would now be regarded as a reversal of roles occurred in 1934 between Offaly and Kilkenny. What was it?

2 – Name the three footballers that played in three Leinster minor football finals in the 1960s?

3 – Matt Connor scored 2-9 in inter-county championship football. What Offaly footballer shares the record with him?