“I played U-21 for four years and never won a match. Them lads are after winning five in a couple of weeks” - U-20 selector 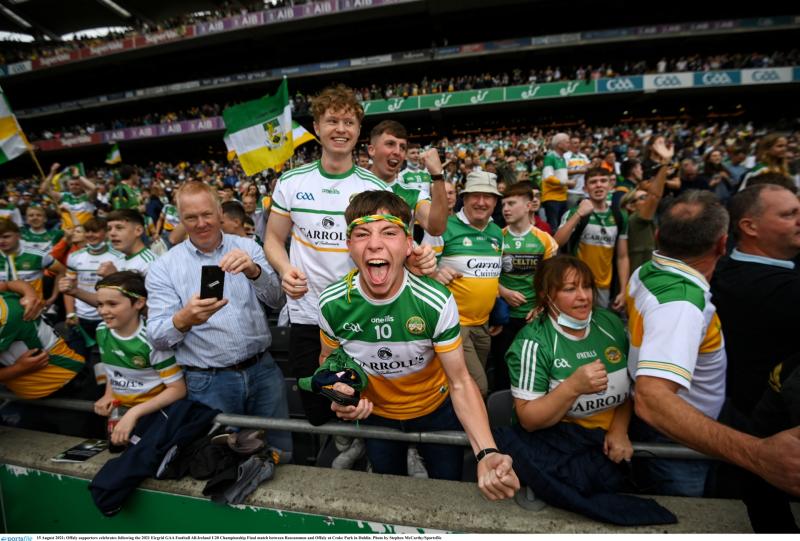 OFFALY selector Ger Rafferty played U-21 football for four years himself, without winning a single championship games. Now he has served as a selector on a fantastic U-20 side who won five in as many weeks and crowned off a sensational season on Sunday with a nerve tingling 1-14 to 1-11 win over Roscommon in the All-Ireland final.

Rafferty played his last year at U-21 in 2003 and went on to give tremendous success to Offaly seniors during a spell when success was in short supply and the bad days far outnumbered the good ones. He first played senior just out of minor ranks in 2000 and went on to make 73 league and championship appearances for Offaly from then until 2009.

A tight, tenacious, honest, hard working and tough defender who didn't suffer fools gladly, the Cloghan man brought these attributes with him to the Offaly U-20 (U-21 when he started out) set up when asked to come on board as a selector by manager Declan Kelly three years ago.

A former playing colleague of Kelly, Rafferty has been there for three of the manager's four years at the helm and along with Ciaran Grennan of Ballycumber and Bracknagh's David Connolly they combined together as a managerial package that worked very well together.

Rafferty's input has been immense. He possesses a strong personality and when he speaks, people listen. He could often be seen in discussion with Kelly during games and after Sunday's win, a number of players mentioned things that the St Rynagh's club man said to them during the year.

Asked what the win means to Offaly, he said:

“We can dream big again. The facility in Kilcormac is a massive help to everyone. It is a bit like a club set up in that we are all over training there. The young crowd all want to be there, there is great interaction between the squads. The minors want to see the seniors go out training and we are all in it. There is no excuses any more for training facilities or grub. The County Board have really stepped up to the mark and it is just a matter of playing football then. In fairness that is all you can ask for and in fairness to the lads, they applied themselves brilliantly all year.”

Declan Kelly spoke before the final about the difference in conditioning, commitment and attitude in players coming into him now compared to when he started four years ago. Rafferty was asked about this:

“The first year we had them for eight months and got a lot of work done with them. We saw the minors this year and they were in serious shape physically wise. In fairness to Ken Furlong, Stephen Lonergan and Cathal Daly (Offaly minor management), they have great work done with them. Everything is streamlined now. You go from one age group to the other and there is no lads falling out of the net unless they fall out themselves. From that point of view, Offaly have a lot of good work done but bringing them to senior level is the next thing.”

It was suggested that Offaly couldn't have dreamt of winning an All-Ireland at the start of the year.

“It was hard to know with Covid and all what was going to go on but the boys came in and were in good shape. They put in hard enough training and beat Wexford by a point in the first round and drove it on after that. From our side of things, it has been a super year, it has been more than we ever expected.
“Just one game fell into another. We were confident enough we could beat Dublin in the Leinster final and the next day out against Cork was about putting another performance back to back. It wasn't really about an All-Ireland semi-final, it was about putting in a performance against Cork and hopefully it would be enough. Then we were in an All-Ireland final and they are there to be won.”

There was huge hype in Offaly before the final. How did you keep the players grounded and balanced?

“We were wondering last week about that with the two week break and the hype kind of got another gear. They are well grounded lads. They said last year, they wanted to be known as a different kind of Offaly team, that they weren't just putting it up to the Kildare's, Meath's and Dublin. That they wanted to beat them. I think the Liam O'Connor Cup really helped us the last two years. We got a small bit of success in the league. Two years we ran Meath close, then we ran Kildare to a point last year. They really wanted to step up to another level. When we were playing Dublin, we really knew by them that this was going to be the day when they really tried to get across the line.

“The minors coming in gave us a lift as well. It was one of those years when everything went our way.”

Rafferty was confident that Offaly would perform in every game they played.

“We knew they could perform and if they performed they wouldn't be too far away. They are a special group. They always find their way to win and they did it again today. We were really under the cosh in the first ten minutes, Roscommon probably should have got two goals but we stuck with it and stuck with it. We drove it on then and probably should have been out of sight.

“We have a tendency to let a team back into it which we did but we don't panic and we fell across the line. It is not simple to win an All-Ireland. I wouldn't know a whole lot about it myself. It is a strange feeling there. It is beyond our wildest dreams what is after happening. It wouldn't be a goal at the start of the year to win an All-Ireland but it is super, a super year.”

Offaly were 1-13 to 0-9 ahead inside the last ten minutes and it was their mistakes rather than Roscommon brilliance that saw it go down to the wire. The selector agreed:

“Yeah, there were one or two balls that we should have cleared all right but Roscommon were always going to have their spell. I think today for young lads U-20, some of them 18, 19, mistakes were going to be made. I said to them going out if they don't make mistakes, they are hiding. They made mistakes but they did enough. They are around long enough now to do that and get over the line. Listen, I played U-21 for four years and never won a match. Them lads are after winning five in a couple of weeks It is a great age group to be involved in, they are all super lads. Some of them have great futures ahead of them.