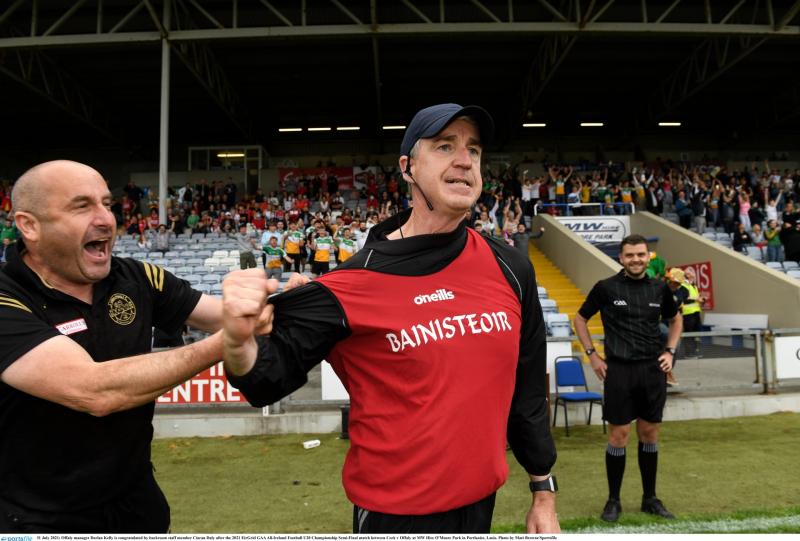 OFFALY manager Declan Kelly did not waste time about turning his focus to the All-Ireland U-20 Football Championship final following Saturday evening's great 3-10 to 0-14 win over Cork in the semi-final in Portlaoise.

Offaly face Down or Roscommon in the All-Ireland final on the weekend of August 14/15 and that will be virgin territory after an incredible year to date. Offaly captured Leinster with wins over Wexford, Westmeath and Dublin and came through another stern test of character against Cork.

It has been a tremendous roller coaster for Offaly and they were sensational in the first half against Cork. As wildly excited supporters converged on the pitch after the final whistle, the Offaly players were quickly ushered towards the dressing room sanctuary. It wasn't that they didn't want to celebrate with their own but Covid-19 was one factor while an even bigger one was the window of opportunity that now waits them in the All-Ireland final.

The players also took their own decision not to party after the win and they will be leaving no stone unturned in their bid to capture their second All-Ireland title in this grade – they won their only one in 1988.

“We obviously had the bit of wind and they got the black card. For the amount of possession we had, we needed that 1-7. It wouldn't have been a good return without 1-7. The wind was actually significant enough out there, you mightn't have seen it. A seven point lead at half time, you would have said we weren't in a bad spot at that stage.

“We pushed it out again with a couple at the start of the second half which was a plus. We knew they were going to come at some stage and come hard. It gave us that bit of a cushion that we probably needed.”

A few mistakes helped Cork come back into the game in the second half. Kelly agreed:

“A couple of times we had possession and coughed it up cheaply. We probably had a few chances for scores in the second half that we didn't take and probably tried to walk it in a little bit, instead of taking a point. Before we got the last goal in injury time, we were hanging on a bit. A high ball went in and we came out with it. They worked hard. For the effort they put in today, I think they deserved it overall. A couple of weeks to get them ready, that is the next focus now.”

The Kilclonfert man explained the reasons behind Offaly quickly heading for the dressing room.

“With Covid and all that goes with it, you have a lot of stuff to mind the lads really which is the big thing. I hope people weren't annoyed or anything over it but it is new to them. You can see the county is in very great form with the way things are going and it has given the whole county a lift. We do have a responsibility to mind these young lads and keep them right.”

He spoke about the All-Ireland final.

“It is something we will have a chat about ourselves. It is new territory. We will get back at it and do what we normally do, get them back at it on Monday. We normally train on a Monday anyway. We will get the show on the road.”

Offaly took off midfielder Morgan Tynan half way during second half and Kelly talked about the need for fresh legs.

The fact that the final is pushed out to the middle of August gives injured captain and defender Kieran Dolan a chance to return from a hamstring injury.

“You would be hoping. We got him scanned last Sunday morning and we knew this week wasn't a runner. Two more weeks and this may come into the equation. If it was this day week, I might know a bit more.”