Heartache for Faithful as Down take the win 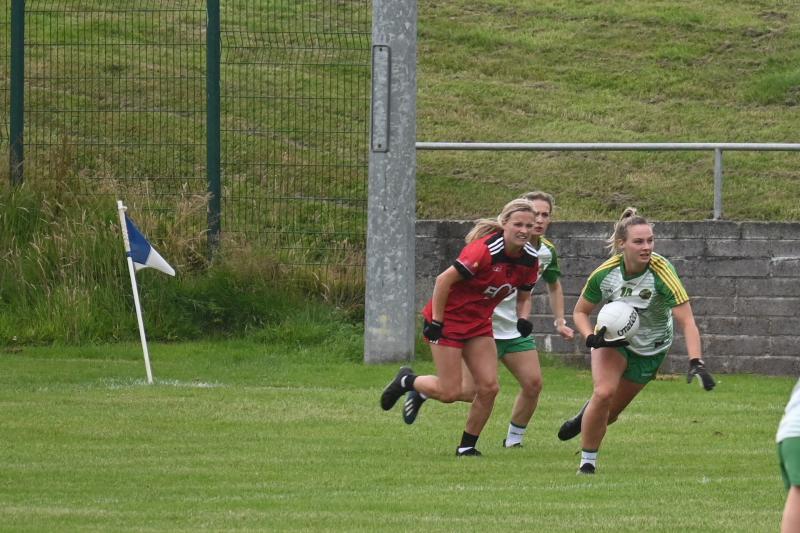 In the end it was a cruel twist of fate that Offaly didn’t come away with something in what was nothing short of a top class game from start to finish in the opening round of the TG4 Intermediate Football Championship.

Played on Sunday afternoon last in Lannliere, Dunleer, Co Louth, this was a humdinger of a battle from start to finish, but it now leaves Offaly with an uphill battle on their hands when they face off against Louth in a week's time.

This was a cracking game of football. The level of intensity was second to none and the level of scoring was right out of the top drawer.

For so long at different spells Offaly led this one, in fact on two separate occasions they were six point clear and seemed to have the game in the bag.

2-1 in the space of a minute from Natasha Ferris provided to be decisive on the midway through the second half, but Offaly did regroup through a cracker from Mairead Daly, but the last four scores came from the Mourne girls and in the end they held out for the win.

Offaly naturally will be extremely disappointed. They had this game at their mercy, but as we all know goals win games. The two that Down got to claw the Offaly lead back were vital and it gave Down the momentum again.

The defining factor of the game was a save by Kate McKay what was a certain goal bound shot from Mairead Daly with eight minutes of normal time to play. But there were more twists and turns to come.

Offaly could have easily dropped their heads at that point, but Mairead Daly was lethal when she got going and with a peach of a goal the lead switched hands again.

Playing with the aid of the wind in the opening half, it was Offaly who hit the ground running. Roisin Egan pointed the game’s opening score with three minutes played.

Natasha Ferris levelled matters two minutes later, but Offaly had more to come. Roisin Egan landed another and then with a wonderful pass Mairead Daly found Grainne Egan and with a rasping shot, the first goal of the game was recorded. Offaly 1-2 to 0-1 ahead.

Mairead Daly turned from provider to scorer with the next one, before Marie Byrne added her name to the scoresheet. Offaly 1-4 to 0-1 to the good ten minutes in.

Laoise Duffy clawed one back for Down, but Amy Gavin Mangan was hot on her heels, just before Aisling Cull and Mairead Daly traded scores. Offaly six clear 1-6 to 0-3.

It was only a matter of time, however before Down found their feet. Laoise Duffy pointed her second and then with twenty three minutes on the clock Down were awarded a penalty.

Up stepped Aisling Cull to the spot and making no mistake she rose the games second green flag. Suddenly all momentum was with Down and with further scores from Aisling Cull and Natasha Ferris, the sides were deadlocked 1-6 each.

It was Offaly, however who finished the half with a superbly struck free from Roisin Egan to take the lead into the break, 1-7 to 1-6.

Offaly were nothing short of brilliant on the resumption. Chloe Sheridan was sprung from the bench but with her first touch of the game she was on the receiving end of a very hard hit from Adair Trainor. It resulted in the two of them having to come off with injury.

Once the game got restarted, Offaly were second to none and with five scores on the bounce thanks to Marie Byrne, Mairead Daly, Grainne Egan, Aoife Carey and Roisin Egan, Offaly were suddenly six clear 1-12 to 1-6.

Nobody could really have predicted what was about to happen. Down looked to be out of the game, but with that it changed in the blink of an eye.

A long high ball in from Natasha Ferris floated in over the head of Lauren Dunne to the back of the net. The gap down to three.

Natasha Ferris on hand again from a quick kick out with another point and then more disaster came for Garry Daly’s charges.

Once again it was a short kick out that fell into the path of Natasha Ferris and making no mistake she drove the ball to the back of the Offaly net. 2-1 in the space of a minute and Down were ahead 3-7 to 1-12.

Offaly may well have been rattled but they regrouped brilliantly and with a brace from Amy Gavin Mangan and Roisin Egan the lead switched hands again.

Ferris was on fire and with the next three scores amid the save from a Mairead Daly shot, Down were 3-10 to 1-14 to the good with fifty three minutes played.

The game was end to end stuff and was far from over. Given a second opportunity there was nobody stopping Mairead Daly this game. She nailed the ball to the back of the Down net to leave Offaly one clear again 2-14 to 3-10.

Unfortunately that was to be Offaly’s last score of the game and it was Natasha Ferris who sealed the deal for Down. Four scores on the trot from the lethal forward saw Down take the win. The final scores reading 3-14 to 2-14 and utter heartbreak for the Faithful.