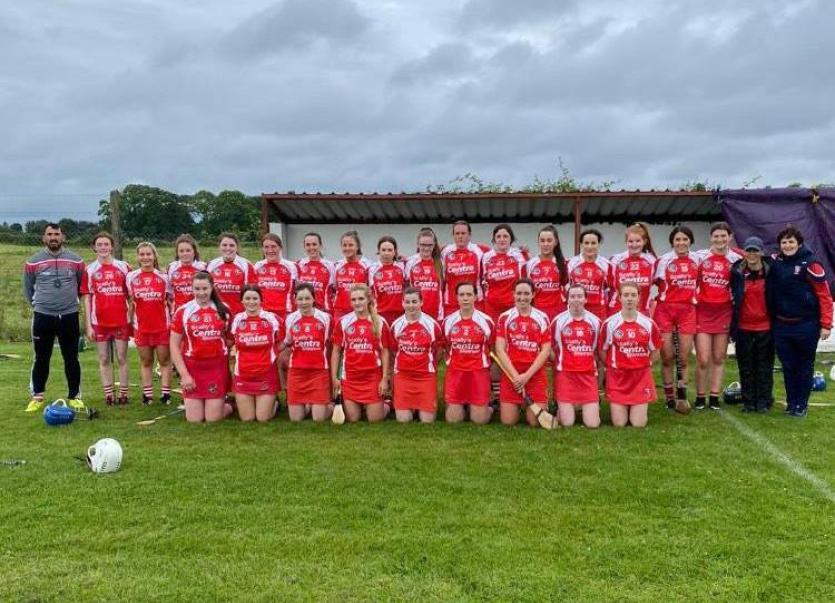 These two teams are becoming very familiar rivals in Offaly Camogie finals having faced in each other in the championship final for the past few years.  So, they both travelled to Lusmagh last Tuesday evening week to play in the League Division 1 Final in the latest chapter of their rivalry.

With both teams missing their Senior county players, it was an opportunity for those players who may not always get a run on the senior stage to show their abilities.

Both teams started nervously but Shinrone looked dangerous with Kelly Sammon opening the scoring with a lovely point from play.

However, in the first 10 minutes both teams struggled to set into their rhythm.  Both sides demonstrated one of the new rules introduced this year and hit quick puck outs to restart the game when the opportunity arose.

St Rynagh's first score came from a free taken by Helen Dolan, after a good passage of play was abruptly ended when Sinead Hanamy was brought down in front of goal.

The sides the traded quality scores from play with Aoife McLoughlin of St Rynaghs and Eimear Maher for Shinrone raising a white flag.  This was followed by two points from Shinrone frees to leave them leading at the water break, Shinrone 0-4 St Rynagh's 0-2

Shinrone came out in the 2nd quarter looking determined and after some great combination play by their forwards, Jane Cleary gave Ellen Gilligan no chance in the St Rynaghs’ goal and suddenly there was 5 points between the teams.

A free from each side followed and a point that could have been easily a goal, only for the fast reaction of the St Rynaghs keeper Gilligan, who got her body in the way to deflect ball over the bar from a Christine Cleary shot, left Shinrone leading at half time on a score line of Shinrone 1-6, St Rynaghs 0-4.

Shinrone were worth every bit of their lead at half time with Christine Cleary in great form in the first half, looking sharp and no showing little sign of injuries that have plagued her in the past 18 months. Marion Crean was destructive in the number 11 jersey, leading by example as always and Kelly Sammon’s catch in the last few minutes of the first half was a joy to watch.

The second half started with a high intensity with a dangerous cross from Katie O’Connell and an unlucky wide from Sinead Hanamy.  Ellen Gilligan continued to save shots from Shinrone and again Christine Cleary was dominant with another point from play. St Rynagh's brought in Eilish Naughton to try and restrict Marion Crean’s influence on the game and it worked with Naughton frustrating Crean with some tight marking.

When referee, Kieran Dooley blew for the final water break, Shinrone’s lead was reduced to 3 with Jane Cleary’s goal being the difference between the teams.  After the break, Rynaghs had a lot of possession but their finishing was hampered by a physical Shinrone defence.  The teams then swapped points from placed balls, but the switch of Ciara O’Connell from full back to a more central role was an inspirational move.

In the 27th minute Roisin Daly’s shot from the 45 yard line, after great St Rynagh's pressure, landed in the back of the net and suddenly the teams were level. Shinrone soon responded however with Christine Cleary again hitting over the bar from a free to put her team back in front.

The tension was palpable and while crowd numbers were restricted, those that were present were really making themselves heard but it was the Shinrone saw the match out winning by that final Cleary score when Kieran Dooley blew the final whistle.

It bodes well for Shinrone as this will no doubt give their confidence a lift as they face into the championship ahead.  St Rynagh's on the other hand will be disappointed but will feel they are in good shape as they look to retain their crown as Offaly Camogie Champions.

Afterwards, Christine Cleary of Shinrone was awarded player of the match before Marion Crean was presented with the League Shield by Ronnie Byrne from the Offaly Camogie County Board.