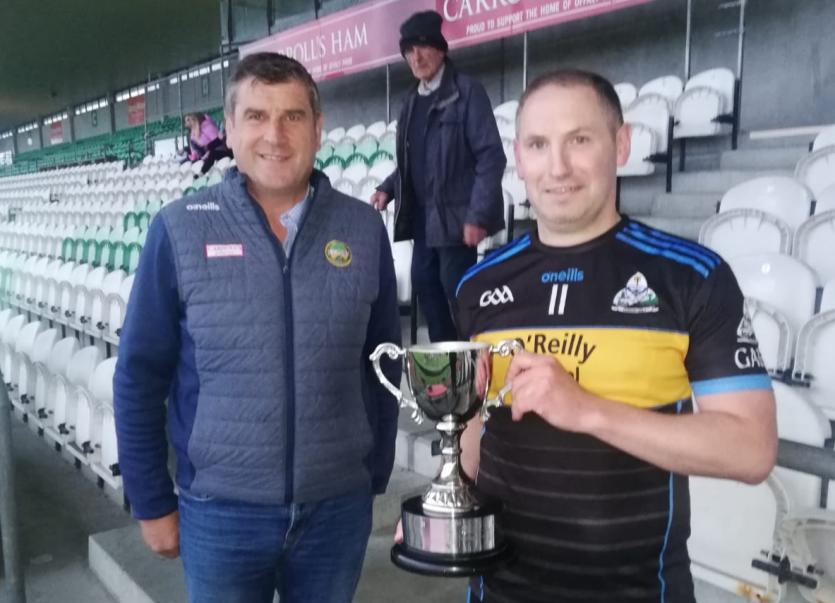 Ballycommon were left shell shocked in the second half of this final as key substitutions for Clodiagh Gaels completely turned this game on its head and saw the champions completely dominate the final twenty minutes.

At half time it looked as if Ballycommon were cruising to victory as they led by 0-5 to 0-2 at the break, in difficult conditions which saw scores hard to come by.

Two further points early in the second half gave them a five point lead and with Clodiagh Gaels having hardly got out of their own half for much of the game, it looked like the title would be heading back to Ballycommon.

However, key substitutes John Paul Casey, Colm McDermott and Ben Dunne completely transformed the final 25 minutes of the game and Ballycommon had no answer as they shot an impressive 3-10 in that period.

The game began to turn when Colm McDermott and John Paul Casey linked up well for the first goal with Casey finishing expertly to the net with virtually his first touch of the game, five minutes into the second half.

Suddenly, Clodiagh Gaels were in front and having managed just two points in the first half, they fired points from distance and various angles, with Ballycommon having no answer as their substitutions completely took over the game.

Their third goal also came from a substitution as Kevin Hinch made up for an earlier saved shot when he shot to the net as the game edged towards injury time.

It was hard to believe the impact that the three previously mentioned subs had, and almost as difficult to understand why some of them didn’t start the game. Perhaps, the management felt they wouldn’t have lasted the full hour but they completely transformed the game and Ballycommon just couldn’t live with the increased fire power in the second half.

Afterwards, County Board chairman Michael Dignan said in his speech prior to the presentation that the score didn’t reflect the performance of Ballycommon, and it was a devastating final 25 minutes which completely transformed the game.

Having only managed 0-2 in 35 minutes, Clodagh Gaels then shot out the lights with 3-10 in just over 20 minutes, emphasizing the amazing turn around, which Ballycommon had no response to.

It certainly was baffling to figure out how those first three subs of the second half in particular, weren’t worthy of a place, such was their influence afterwards. Having waited so long to play the 2020 final, Clodiagh Gaels will certainly feel it was worth the wait.

It also inspired other Clodiagh Gaels players who got on the scoresheet, having hardly featured for over 40 minutes.

For Ballycommon, the heavy defeat will be a tough one to take as they dominated the opening 35 minutes or so, only to be completely swept aside in devastating fashion.