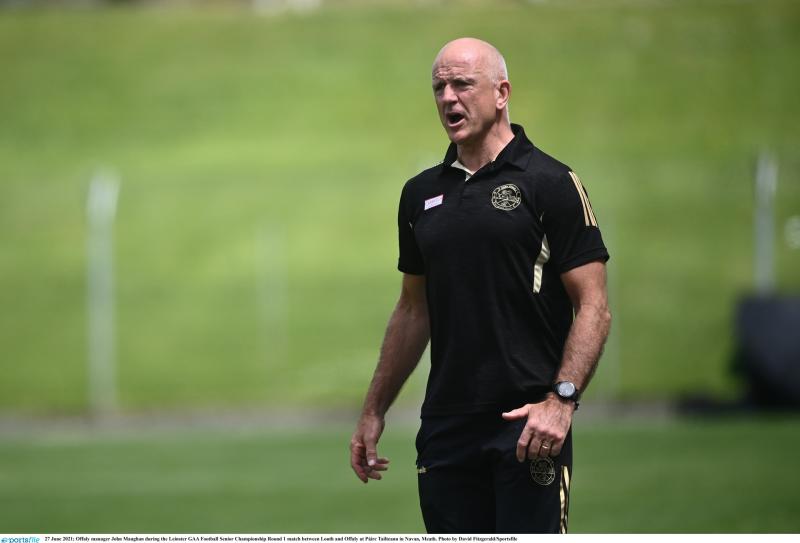 JOHN Maughan knew Offaly had went very close to a devatasting exit when they survived an extra time thriller against Louth in the Leinster Senior Football Championship in Navan on Sunday afternoon.

Offaly found their best form in extra time to win by 3-19 to 0-19 but they had almost lost in normal time with a Sam Mulroy shot deep in injury time drifting just wide of the target.

Maughan admitted afterwards that he feared the worse as Mulroy found the space to get the shot “I suspected by the way he was striking the ball, I had no doubt that he was going to kick it over the bar. He's a fine footballer and, yeah, we should have seen it out, we were three points up with about five minutes to go and they did a full press on our kick-outs and we struggled to regain possession in what was a critical time of the game.

“I think we learned from it when we went into extra-time. Look, there's very little between the two sides, it was see-sawing right from the start to the finish. We started reasonably well, we were three points up and they brought it back and went two up at half-time. We didn't play as fluently as we would have liked but thankfully we had the legs. And we did score a rather fortuitous goal on one or two occasions that maybe got us over the line. Thankfully they came our way today, that little bit of luck that you need in the Championship.”

Maughan's decision to start the veteran Niall McNamee yielded a rich dividend. The Rhode sharp shooter scored 1-3, set up another goal and caused consternation in the Louth defence as well as lasting longer than expected, a full 86 minutes.

“Yeah, he's amazing. Niall McNamee's a super footballer. I recall watching him playing for his club Rhode 15 or 16 years ago. He was just immense and I took a particular interest because I was at school with his Dad, to be honest, in Carmelite College, Moate, many years ago. Niall McNamee is highly respected, he's an iconic footballer, he's just a gem, he's amazing. He's very, very good in the dressing-room, he's very, very good outside the dressing-room with the younger players in particular. It's just marvellous, we don't have to mind him, he's playing so well in training, he's a super start.”

The Mayo man agreed that McNamee really shone in extra time before being called ashore.

“That's the thing about class players, all they need is a sniff of a chance. There's no point looking over your shoulder and seeing him sitting on the bench when those chances present themselves. You want the right man in those positions and with the expertise he has he did brilliantly.”

He was asked about Offaly's fitness and conditioning which helped drive them across the line in extra time.

“I listened with interest yesterday to the commentary on the Sligo/Mayo game, talking about conditioning. All inter-county footballers are more or less on a par. I think Mickey Harte has one a great job getting those boys promoted. They only lost one game by a point to Antrim in the first round of the National League, I think it was. No, they're a good team, we played them last season on a couple of occasions in the National League and the O'Byrne Cup. Yeah, we looked good, I don't know is that a reflection on our conditioning or theirs, it's hard to say. You just need to get the run of the ball at critical times in the game when it matters most and we did.”

Maughan was asked about how they recovered from the Division 3 league final defeat by Derry.

“Yeah, it was good, these boys are footballers so they want to play football. I'd be a right clown if I turned down the opportunity to play in Croke Park. That's what they want to do, they love playing football so it would have been a shambles if we'd turned that down. It was disappointing and they were hurting obviously after a 12-point defeat but I mean, you play in Croke Park, you get an opportunity to play in Croke Park, some of them had never been there, never mind played there. It was important that they got the experience and enjoyed that aspect of it.”

Had you much picking up to do with players after such a hammering?

“I had to pick up myself! Yeah, it was disappointing to be honest with you. They were hurting a fair bit but thankfully we were turning around so quickly. That was a nice thing to get a game so quickly, so soon after a heavy defeat like that, to get the chance to get back and to address that aspect of it. Thankfully we came out (with the win).”

Now Offaly face a quick turnaround to get ready for Kildare next Sunday.

“We've to mind them. The games are coming so quickly you don't get an opportunity to freshen up the legs. We'll have to hit the ice baths and things like that just to get their legs going again.”

He agreed that it was great for Offaly to win another Leinster championship game.

“It is. They've been progressing and there's a lot of young fellas who want to play football for Offaly. A couple of years ago they probably didn't, because it was slightly embarrassing  but there's nobody that turned down the opportunity to get involved which was nice to see. They're a proud county, I remember in the 1970s watching the old team and I had the pleasure of playing with Sean Lowry in Mayo and my home club Crossmolina. They were superstars back in the day and I was on the same pitch as Matt Connor back in the day. They were a super team so to see hurlers and footballers down at such a low ebb it's disappointing if you're a sportsman particularly if you're a GAA man. Nobody likes to see that. People respect Offaly because they did something unique in 1982 stopping the five-in-a-row so there's a soft spot in Offaly football. I felt nothing but encouragement since I came up to get involved with them and thankfully we're enjoying days like this which is nice.”

He acknowledged that Offaly left a chance behind against Kildare in the championship last year.

“There was certainly an opportunity and even here a couple of years ago against Meath as well. We've played well in the (Leinster) championship in both of our games but came away with nothing. Look it's Kildare again who we know exceptionally well, they've Jack O'Connor involved there now so it'll be tough there's no question, it's going to be big ask. I don't know where the game is but lookit we'll go and play anyway and do the best we can and take some learnings from here and have a crack at it.”

Maughan agreed that the next step for Offaly is to beat a team like Kildare.

“Wouldn't that be just awesome, it would really propel you into a different scenario altogether. That would be brilliant if we did that, but we'll just take little steps and see how we get on.”