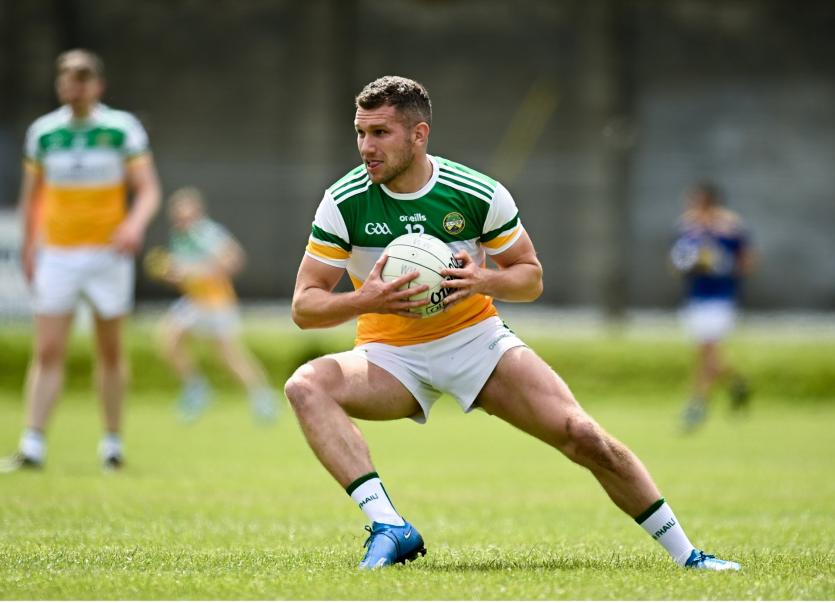 Anton Sullivan had a great first half for Offaly.

OFFALY produced their best and most compelling performance of John Maughan's reign to secure a semi-final berth in Division 3 of the National Football League thanks to a very impressive five point win over Tipperary in Tullamore today.

With a gun to their head, Offaly stormed across the line in the closing quarter to leave a stunned Tipperary searching for answers.

The stakes were huge in this one. Munster champions Tipperary had to win and a three point success would have put them ahead of Offaly – leaving Offaly depending on the result between Limerick and Wicklow in Aughrim to secure their knockout place. A defeat could actually have left Offaly in the relegation play off and the pressure was immense on them here.

It is the type of pressure that Offaly football teams have wilted under in the past but it was a different story here as they took everything that Tipp threw at them and then blew them out of the water.

Offaly played their best football in the first and fourth quarters but continued to work hard in between to limit the damage that Tipp inflicted. More importantly, they didn't panic, kept trying to do the right thing, kept working like men possessed, even when they did drag too many players back into defence inside the closing quarter.

A Cian Farrell goal had Offaly 1-5 to 0-3 ahead after 19 minutes and they were clearly the better team at this stage. They also led by 1-6 to 0-4 before Tipp finally clicked into gear and showed some of the form that saw them have such a good year last season. Offaly struggled for a while and a controversial penalty goal from Conor Sweeney saw Tipp lead by 1-8 to 1-7 at half time.

The sides were even early on in the second half. They were level on three occasions, 1-9, 1-10 and 1-11 each and it was very neatly poised at the second half water break. It remained that way for a few minutes. A free from excellent goalkeeper Paddy Dunican edged them in front in the 58th minute – Dunican gave a man of the match display as he converted three placed kicks and dealt superbly with everything that came his way, though he was fortunate that a Conor Sweeney punch didn't find the net in the 53rd minute.

Dunican was also very composed coming out the field on the ball and his fine 60th minute save from brilliant Tipp sub Philip Ryan was crucial – he would have been expected to save it but it knocked a bit of life out of Tipp as they began to shoot on side and had some awful wides.

Niall McNamee drove Offaly across the line quite spectacularly. He was brilliant when he came on and Tipp just couldn't cope with him – the veteran Rhode forward had six shots on goal in an almost unreal closing quarter, three of them flew over the bar and he did everything that John Maughan could have asked for.

With the game in the melting pot, Offaly scored six points without reply before Tipp got the final score deep in injury time. It was the first time in a long time when Offaly have won a game in this manner, especially with such pressure on, and like the hurlers, they look to be turning a corner.

Their physicality and fitness levels caught the eye and they had a definite edge on Tipperary in this area. Their hunger, their desire shone like a beacon but their football is also improving. Their honesty and work rate was once again there but Offaly also moved the ball at pace. They nearly always had a man running off the shoulder of the player in possession but they were not afraid to let in long fast ball that had to be won.

It was a display that enscapulated the best of the modern possession game along with some of Offaly's traditional football. Obviously, there is still a very long road ahead for Offaly and this was Division 3 but it was encouraging.

The management also had a good game and as players tired in the second half, they were very quick to throw in fresh legs. Players such as Eoin Carroll, Anton Sullivan and Cathal Mangan were called ashore as they began to make wrong decisions and errors and the management were quite ruthless as this trio had produced plenty of good moments, especially Sullivan who was on fire in the first half. However, the subs freshened up things and were instrumental in that closing quarter tour de force.

It was a very solid all round team performance. There was no player head and shoulders above the rest but you had a collective group working very hard for each other and leaving it all on the field. It wasn't perfect and there were sloppy moments but it was a big win for Offaly.

Carl Stewart did very well at the heart of the Offaly defence. A late call up for Johnny Moloney, he held the centre very well and was very strong on the ball. As his fitness levels improve, he should be a good addition to Offaly this summer. David Dempsey was moved back to corner back and he was excellent in a very hard working defence where Colm Doyle and Jordan Hayes went up field at every chance.

Eoin Carroll put in a fine shift at midfield while Peter Cunningham had another excellent game. He wasn't in the game the whole time but his influence grew in the second half and the Bracknagh man's return to form is very welcome. Anton Sullivan and the lively Bernard Allen got three points each from play in the attack but Ruari McNamee had a very good first half, doing the simple things well and winning hard ball while Shane Horan was another who became more influential as it wore on.

Injuries had forced Offaly to make changes before the start with the injured Declan Hogan and Johnny Moloney out while Joe Maher was also left off. It resulted in David Dempsey going back to a more familiar defensive role while Carl Stewart started at centre half back and Cathal Mangan and Cian Farrell came into the team to lead the attack.

Offaly played very well up to the first half water break. They were hard but fair in the tackle, forcing Tipperary to spill the ball or run into trouble. In a tight opening, the sides were level three times in the opening ten minutes but Offaly were moving that bit better with Cian Farrell showing very well in their attack.

A fantastic tenth minute goal gave Offaly the initiative. Shane Horan did very well to send Cian Farrell in for the goal after Bernard Allen and Cathal Mangan had been involved in the build up. A few chances were also missed for Offaly, who also could have got in for another goal. However, points from Anton Sullivan and Bernard Allen, who was thinking of goal but fired over the bar, gave Offaly a deserved 1-5 to 0-3 lead at the first half water break.

A worried Tipperary rang the changes at this stage, introducing Philip Ryan and Kevin Fahey. Ryan made an instant impression with a mark and an excellent point from play and Tipp were moving with much greater menace.

The game turned in their favour with two scores. Padraic Looram's point came after Cathal Mangan pushed a player after delivering a pass to a team mate and Tipp got a controversial 33rd minute penalty. Niall Darby was almost shouldered into the net as he soloed across his goal line and was then penalised for over carrying with Conor Sweeney expertly converting the penalty. A Cian Farrell free left it 1-8 to 1-7 after a thrilling first half and it was all to play for.

It was nip and tuck the whole way through the second half. Offaly edged in front, 1-10 to 1-9 after 43 minutes and Cian Farrell's free had them 1-11 to 1-10 ahead before a Jack Kennedy “45” levelled it up at the water break – it looked a wrong decision as Conor Sweeney had almost punched a goal and it seemed to go wide off him and not Paddy Dunican.

Offaly were superb in the closing quarter as they took control of the game in every sector and showed great hunger. Poor shot selection and some shocking wides from Tipperary assisted them but Offaly's sheer will to win was more than the Munster men could cope with.

Niall McNamee was pivotal to Offaly's success. He had come off the bench a few minutes before the water break and he drove the winners across the line. Showing for everything, he got three super points with his first from way out on the left wing worthy of winning any game. He also three wides and Tipp just couldn't cope with his presence and ability to play football.

It did look for a few minutes that Offaly would put pressure on themselves by playing too deep. On a few occasions, they had fourteen men back in their own half of the field but on this occasion, it worked as they broke up field at great pace when they did win possession. Bill Carroll and David Dempsey also got excellent points in that sensational closing quarter as Offaly scored six without reply before Philip Ryan got a late consolation point for the visitors.

SEE MORE IN THIS WEEK'S MIDLAND AND TULLAMORE TRIBUNE