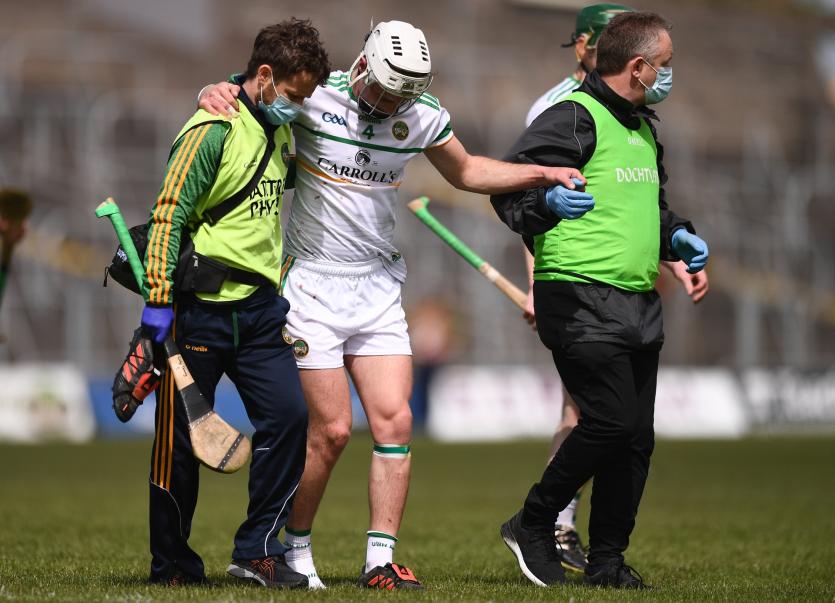 IT is very early days yet but Offaly still made an encouraging start to their season with a big win over Meath in Division 2A of the National Hurling League in Navan today.

It is hard to know how much to read into it but it was a definite step in the right direction for Offaly. They had to hang on for dear life to beat Meath in the league last year but their victory was never in doubt here once they found their stride in the second quarter.

Meath were a lot worse than last year and the fight went out of them early in the second half. Offaly, however, played very well. They were very mediocre in the first quarter but things changed spectacularly after the water break.

Offaly were 0-6 to 1-2 behind at that stage and were grateful to Oisin Kelly's brilliantly flicked first minute goal. Offaly had first use of the wind but Meath were the better team early on and it looked like trouble could be ahead for Offaly. The wind may have been more of a hindance that anything else – Offaly had 11 wides with it in the first half while Meath had seven in the second half.

Offaly got their act together after the water break. They looked a completely different team, made less mistakes and were more intense in the tackle and when foraging for the ball. They scored 1-11 without reply and led by 2-13 to 0-7 at half time.

Meath got an early goal in the second half but 1-5 without reply from Offaly put them to bed and was exactly the response they needed. Meath got two further goals, the last one in injury time, and the concession of three goals was the only real negative of the afternoon for Offaly. They were all soft and very preventable. The first two came from the right hand side of the field with Meath getting in by Killian Sampon and sub Paddy Rigney – the second was an own goal from Damien Egan while the last goal from Jack McGowan probably should have been saved by Conor Clancy.

The positives far outweighed the negatives. 3-25 was a very good scoring return and it could have been higher for Offaly. They were a vastly superior outfit once they got going and Offaly showed a great work ethic. They moved the ball more direct than they did at times last year and were not afraid to let in long ball.

Offaly will learn a lot more next Sunday when Kerry come to Tullamore but this was a satisfactory display. There were also some very encouraging individual displays and evidence of clear improvement with some players. Ross Ravenhill had a fantastic game at midfield and was man of the match. He was particularly influential in the first half when Meath were competitive and he did the simple thing very effectively, getting through a lot of unseen but very valuable work.

Liam Langton picked off five points from play in the attack. He started sluggishly but was wonderfully sharp once he got his eye in and he seemed to have acres of space. Brian Watkins had a superb game on the half back line and again, he did most of his best hurling when Meath were asking questions. Eoghan Cahill once again top scored, this time with twelve points, and his accuracy from play and frees continues to impress – his haul included two sidelines.

Ciaran Burke was immense at full back while Leon Fox worked hard and Oisin Kelly ensured some very uncomfortable moments for the Meath defence, even if some things didn't work out for him.

Offaly were ring rusty early on and their forwards were certainly not sharp. They had seven wides before the first half water break and many of these were very scoreable. Ironically Offaly's crucial early goal came from a mishit shot on point by Liam Langton in the first minute with Oisin Kelly brilliantly flicking the dropping all to the net.

That gave the visitors a 1-0 to 0-1 lead but Meath's forwards were more clincial after that. They got five of the next seven points to lead by 0-6 to 1-2 at that water break. Meath were playing against the wind and that lead was fully deserved at that stage, even if Offaly had marginally more possession and were working dilligently.

Offaly were much sharper after the resumption with quick fire points from Ross Ravenhill and Eoghan Cahill putting them in front and then Leon Fox made the gap two with a huge free. Cahill added a free before Offaly got their second goal. A fine move involving Brian Watkins, Ben Conneely and Shane Kinsella's, whose pick up was excellent, sent Oisin Kelly in on goal. The Belmont man's shot lacked conviction but Adrian Hynes was on hand to tap the rebound to the net to give Offaly a 2-6 to 0-7 lead after 24 minutes. Brian Duignan added a point and Offaly were moving much better.

They went for the jugular after this as they played with much greater fluency and cohesion. They were more efficient in the way they played a further six points for 1-11 without reply before Padraic O'Hanrahan got a free deep in injury time for Meath. That left Offaly ahead by 2-13 to 0-7 at half time and in complete control.

A goal from sub James Kelly two minutes after the resumption reduced the gap to 2-14 to 1-7 and gave Meath a glimmer of hope. Offaly's response, however, was emphatic and they quickly closed the door. Liam Langton got a point and a Shane Kinsella goal after Oisin Kelly's shot was saved in the 42nd minute put Offaly back in the driving seat. They were 3-18 to 1-8 up when Meath got a soft second goal with Offaly defender Damien Egan deflecting Mark O'Sullivan's half blocked shot into the net for an own goal in the 49th minute.

A Cahill free and another Liam Langton point put Offaly 3-20 to 2-8 ahead at the second half water break. The game dwindled out very harmlessly from here with Meath getting an injury time goal from Jack McGowan but it had no impact whatsoever on the outcome.

SEE THIS WEEK'S MIDLAND AND TULLAMORE TRIBUNES FOR MORE

Meath: Padraic O'Hanrahan 0-4 (3f), James Kelly and Jack McGowan 1-0 each (the other Meath goal was a Damien Egan own goal), Alan Douglas 0-2, Jack Regan, Gavin McGowan and Adam Gannon 0-1 each.