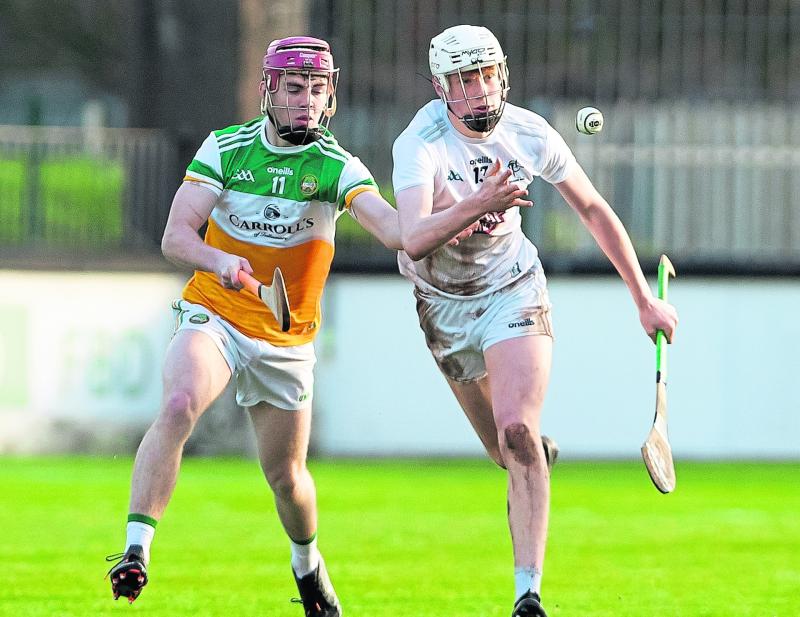 Joseph Hoctor played well for Offaly at wing back today.

A STUNNING second half display saw the curtain come down on a stunningly spectacular weekend for Offaly when they sealed their place in the Leinster Minor Hurling Championship final with a convincing win over Westmeath in Mullingar today – joining the minor footballers who had a fabulous win over Kildare in their semi-final on Saturday.

Having scored 1-15 without reply against Kildare the previous week, Offaly produced another fantastic spell of relentless, all consuming pressure here as they hit Westmeath for 1-13 on the run in the second half.

1-8 to 1-5 behind after Westmeath got the opening point of the second half, Offaly had it all to do but they got on top in every sector as they destroyed their opponents. Playing with great pace and commitment, Offaly were 1-11 to 1-8 ahead by the 43rd minute and the writing was on the wall for Westmeath. They went for the jugular in ruthless fashion. They were 1-14 to 1-8 ahead by the 50th minute and Westmeath's body language was that of a beaten team.

And so it proved in the final ten minutes plus as Offaly got a further five points and a goal from sub Daniel Bourke deep into injury time put the icing on the cake for them.

It completed a super end to the year for Offaly and the appearance of the two minor sides in provincial finals will give a huge boost to everyone in the county.

READ NEXT: Christmas comes early for heroic Offaly as they reach Leinster Final

It wasn't all plain sailing here. Westmeath had first use of the wind in the first half and were full value for their 1-7 to 1-5 interval lead. With Offaly struggling to get going, Westmeath were the better side and the visitors were very happy to get to the break with a mere two point deficit.

Offaly had been lucky not to have been reduced to fourteen before the break as Ruari Dunne walked on thin ice after a late tackle but got away with a yellow. The wind also picked up in strength in the second half and while Westmeath remained competitive for ten minutes or so, Offaly's dominance became more and more pronounced as it wore on.

They did make a few mistakes at times and were not always as sharp and as clinical as you would like but it was a very impressive second half and it ended up a very impressive win. Offaly have done really well this year, beating Laois, Kildare and now Westmeath. They will be underdogs for the Leinster final but they are improving the whole time, they are working so hard and they are a work in progress.

It was a collectively very good display here but there were a few individuals who stuck their heads up, In particular centre half back, Sam Bourke, ace forward Lochlann Quinn and Luke Carey were all magnificent.

Bourke was super at centre half back, mopping up plenty of ball as a sweeper in the first half and then excelling in a more traditional defensive role in the second. Quinn was once again wonderfully sharp in the attack, scoring 1-11, five of them from play. He missed a couple of frees but his scoring rate is quite fantastic and he really came into his own in the second half.

Luke Carey, a nephew of Joe, Johnny and Billy Dooley, was also excellent in the attack. He scored a crucial 1-3 and display some breathtaking skill and awareness.

There were plenty of others who flourished with Joseph Hoctor, Cathal King, dual star Cormac Egan and Charlie Mitchell making pivotal contributions – the impression remains that there is more in Mitchell and that he will really click some day but he improved as the game went on and caused Westmeath a lot of problems.

With both Leinster finals fixed for the first weekend in January, it is a very exciting time for Offaly and there is light now seeping through at the end of the tunnel.

The game made a high octane start with Offaly firing home a goal after just 45 seconds – Cormac Egan fed Luke Carey who finished well after a poor clearance by Jack Geoghegan.

Westmeath's reply, however, was instant and there was just 1 minute 25 seconds on the clock when they had their own goal – Mark Troy made a fine safe from Eamon Cunneen but David Williams stroked home the rebound.

After this, Westmeath were the better side, taking some good points and winning the majority of the 50/50 exchanges as Offaly struggled to find momentum. Westmeath got five points while Lochlann Quinn converted two frees for Offaly and a 1-5 to 1-2 lead for the home side at the water break was a fair reflection of the way the game was going – Westmeath had the wind in the first half.

Offaly played better in the second quarter, raising their intensity levels and a lovely Eoin Murphy point and two excellent Lochlann Quinn frees, the second from a very acute angle out on the right wing, cut the gap to a point with the half ticking away.

Offaly had a big let off in the 26th minute when Ruari Dunne chopped down late on Sean Leech. It looked like a red card and the Na Fianna man wouldn't have had a hard luck story if it was shown but he got a yellow much to his and Offaly's relief – Dunne is a very tidy efficient player, who is not dirty and his tackle was careless rather than malicious. Eamon Cunneen pointed the free to give Westmeath a 1-7 to 1-5 half time lead and with the wind to come, Offaly were the happier side at the break – the home side, however, had been the better team in the first half and it was all very much in the balance.

Eamon Cunneen extended Westmeath's advantage quickly in the second half but Offaly took control quite spectacularly after this. With Lochlann Quinn finding the range from play and frees (he got two opportunist ones from play) and Charlie Mitchell (two) and Luke Carey also finding the target, Offaly hit seven on the trot to lead by 1-12 to 1-8 at the second half water break.

The water break certainly didn't disrupt Offaly here as they continued where they let off. They scored a sequence of quality points, adding six more before Daniel Bourke's goal well into injury time.