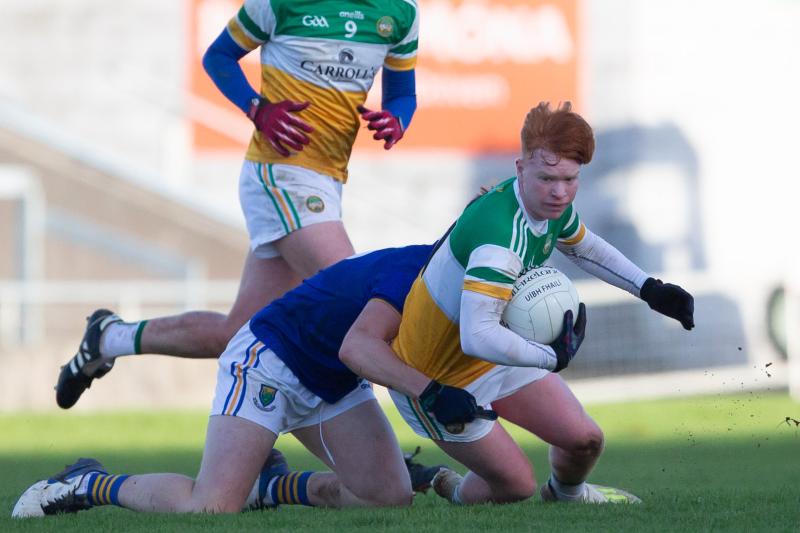 CHRISTMAS came early for a heroic Offaly when they booked a place in the Leinster Minor Football Championship final with a superb win over Kildare in Newbridge today.

Playing with tremendous heart and character, it was Offaly's best win at this level in years. They had to work so hard for the result but they answered everything that Kildare threw at them and there was absolutely no disputing the merit of the win.

Only three points separated the sides at the end of an engrossing high intensity game of football but Offaly were definitely the better team and could have won with more comfort. They ended up hanging on a bit and were relieved to hear the final whistle but they still closed out the deal with a degree of comfort.

Offaly could never breathe easily but as Kildare ran into black card trouble late on, the visitors were able to get across the line.

They were the better team the whole afternoon. Offaly led by 2-6 to 1-3 at half time, having played with a slight breeze thanks to goals from Cathal Ryan and Keith O'Neill and they would have been really in control only for conceding a late goal and a point. It was a really excellent first half performance and it was one that gave Offaly great confidence.

Kildare threw the kitchen sink at Offaly early in the second half as they upped their intensity levels all over the field. It looked like Offaly could be in bother but they defended heroically and managed to steady the ship. By restricting Kildare to just four second half points, Offaly gave their chances a great lift, though Kildare's late goal ensured some very anxious late moments.

Offaly were leading by 2-8 to 1-7 and under pressure after Kildare got three points on the trot when full back and captain Elliott Byrne got a black card with seven minutes left. That certainly helped Offaly and two super points from Jamie Guing and Pauric Robbins pushed them 2-10 to 1-7 ahead.

It looked all over but an excellent 60th minute goal from Oisin O'Sullivan after he outfielded the otherwise excellent Tom Hyland made it a one score game. There were over five minutes of injury time played and Offaly's watching parents feared the worse but again, they defended superbly and never gave Kildare a sniff of a match saving goal – sub Luke Killian got a 65th minute black card to add to their tale of woe.

It was an absolutely heart warming performance from Offaly. They had a tremendous work rate, they were so honest but they also played some quality football. Their use of the ball was top notch, they held possession really well and their composure belied their young years.

There were of course mistakes made. Wayward passes, sloppy handling and they certainly drifted too far back for a spell in the second half but it was an overall very pleasing display.

They had heroes all over the field. Cathal Ryan and John Furlong were almost neck and neck for man of the match with Ryan magnificent at centre back as well as getting forward for a decisive goal and a point while Furlong's first half display in particular bordered on the phenomenal as he worked so hard, turned over ball and used it very well – with Harry Plunkett oozing quality beside him, Offaly took the midfield honours.

There were other performances that commanded attention. Tom Hyland was brilliant at full back and Diarmuid Finneran put in a tremendous shift at corner back, doing the hard work so effectively. David Dempsey also excelled in defence while up front, Marcus Dalton really stood up to be counted. His power and drive caused Kildare all sorts of problems and some of his second half catches just took the breat away. Keith O'Neill and Jamie Guing were once again lively and dangerous, Alex Egan worked like a tiger and Cormac Egan had another great game – the finished product wasn't always there but his pace and direct running as he consistently took on and roasted is man had Kildare searching for the panic button every time he received the ball,

From the throw in, Offaly were very much a match for Kildare. Their work rate was excellent and they played some good football, even though the full forward line didn't always stay in.

Kildare got the first point through Oisin O'Sullivan but Offaly got the next three, two frees from Keith O'Neill and one from Jamie Guing to lead by 0-3 to 0-1 at the first water break, Offaly could have had more as Keith O'Neill was inside the penalty area when fouled but the referee gave a 13 metre free that Guing floated over.

Offaly really sprung to life in the second quarter,. With Harry Plunkett and the outstanding John Furlong controlling midfield, they really went at Kildare and opened up a 2-6 to 0-2 lead with time drifting away in the half.

The first goal came in the 24th minute when John Furlong won a great turnover at midfield. Captain Cormac Egant went on a fantastic run and as the defence opened up in front of him, he got through for a shot that was saved but centre back Cathal Ryan punched the rebound to the net.

After a Keith O'Neill mark, the Clonbullogue forward got a superb goal, winning an Alex Egan pass, racing through and blasting to the net in the 28th minute. Kildare were reeling but got a lifeline with a soft goal when Offaly defended a high ball poorly and Oisin O'Sullivan blasted a stunning shot to the net. Adam Fanning added a free to leave Kildare trailing by 2-6 to 1-3 at the break. It could have been more for Offaly but a six point half time lead still represented a very good thirty minute's work for them and they were in a good position.

Kildare did have the breeze to come in the second half and they asked serious questions of Offaly early on. Adam Fanning got a free for them and their work rate was much better as they pushed up on Offaly's kickouts and gave them no breathing space.

Offaly, however, kept plugging away and a super fisted point by Cormac Egan after he raced away settled them. Cathal Ryan added a great point and Fanning's free left Kildare trailing by 2-8 to 1-5 at the second half water break.

Kildare got the next three to bring it back to a four point game but those points from Jamie Guing and Pauric Robbins, who kept plugging away all afternoon, proved match winners and gave Offaly the cushion they needed to withstand Kildare's late goal and rally.