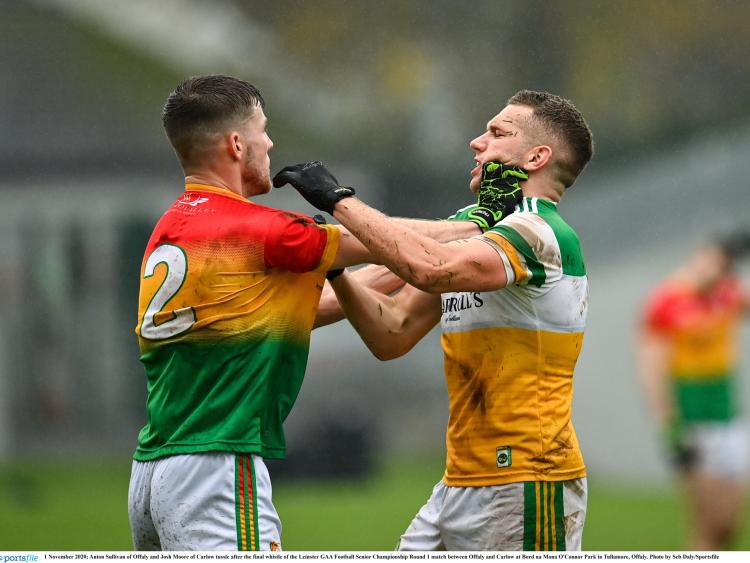 USED to being an automatic starter on the Offaly senior football team, it would have came as a bit of a shock to Anton Sullivan's system to be left off for the two National Football League Division 3 games after inter-county reaction resumed a short few weeks ago.

Sullivan only came on as a sub in the defeats by Tipperary and Derry – however, he particularly impressed when coming on at half time against Derry and that earned him his starting place in Sunday's Leinster Senior Football Championship victory over Carlow in Tullamore.

The Rhode man went well on Sunday, scoring two points and working very hard. Asked about the reasons for this earlier omission, he admitted:

“I am not too sure to be honest. I suppose I didn't think I played particularly well in the club county final. I'd say John (Maughan) thought my form was maybe off a bit. He had a good chat with me and I knew where I stood. I felt the two week break with the two games recharged my batteries a bit. I was very disappointed not to play but that is the way it goes. Lads had showed well in the club championship and John had to go with that.”

He used the opportunity to reflect on his own game and the way he had been performing.

“I just reflected myself, took a bit of time out and worked on my own game. I thought I played well in the games I came on in during the league and I carried a bit of that form into today. I will just work again and keep my head down. There is plenty of competition there for places. If you are not focussed, you will be out and that is just the way it is. I will just work on myself and work for the team all week.”

Sullivan was relieved that Offaly did just enough to beat Carlow, winning by 3-14 to 0-20.

“Job done, it wasn't going to be easy on a day like that. The first round of the championship, we haven't won too many down through the years. It was just nice to get the win.

“We went down to 14 men with the black card with 12-13 minutes to go and they got a couple of points. I thought they got a couple of soft frees to bring them back into the game but job done. We have plenty to work on. We have a big week's training ahead and Kildare are coming next Sunday. Lots to work on but we are really looking forward to Kildare next Sunday and we are delighted to be in the next round of the championship.”

Were yopu disappointed with some of the mistakes made by the team?

“The conditions were slippy and it was tough on the legs. It was Winter football. It is not easy. Look at all the games over the weekend there, there were a lot of mistakes. We know we have to brush up on a few things but it is just great to be in the next round of the championship. Offaly haven't won too many Leinster championship games in the last ten years and we are just delighted to win.”

He is now looking forward to the Kildare challenge next Sunday.

“People would expect us to come here and beat Carlow today. We can go and enjoy the week, to a certain extent. Let the shackles off and give Kildare a go. It is knockout football. You see what Cavan did up in Clones yesterday (beating Monaghan). Anything can happen. Cavan were relegated the week before and Monaghan wer a division 1 team. It is all on the day. We will prepare ourselves as best as possible this week, we will get our recovery in. We will throw everything at them, we have nothing to lose.”