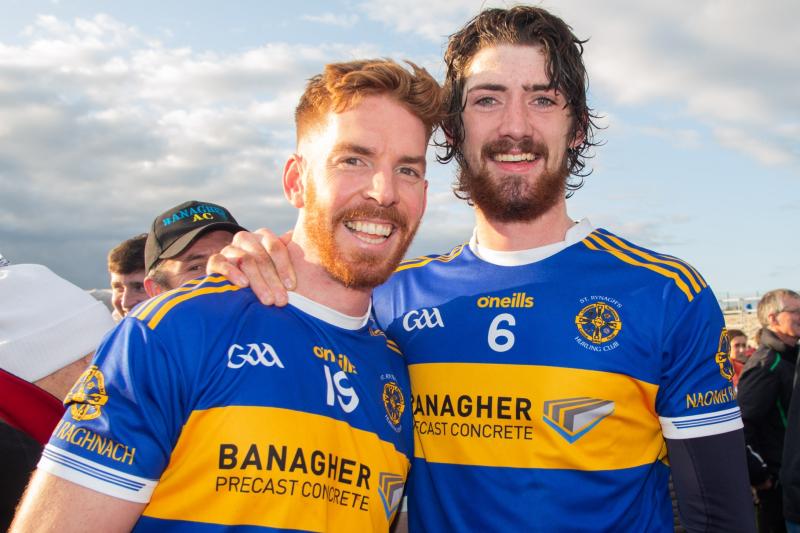 WHEN the game was there to be won in the second half, champions St Rynagh's were hugely impressive as they inflicted more heartbreak on Birr and set up an absolutely mouth watering Senior Hurling Championship final against Kilcormac/Killoughey.

The final pairing is one to set the pulse racing as St Rynagh's and K/K have been clearly the best teams in this year's championship and the Banagher club had to come through a real tough battle here, one that will serve them really well.

This win was not as comfortable as the scoreline suggests but it was also quite convincing. Birr missed a lot and could have asked really serious questions in the last few minutes had they been more clinical but St Rynagh's just wore their opponents down and they were really brilliant in the closing quarter.

This game was neatly poised for a long time and a Birr victory was a distinct possibility heading into the closing ten minutes. Birr had been ahead, 0-15 to 0-14 after 43 minutes but from here on, they just couldn't match the winners' power, strength, physicality and sheer will power. Stephen Quirke, Ronan Hughes, Luke O'Connor and Diarmuid Horan got four really good points in a few minutes as St Rynagh's took a 0-18 to 0-15 lead after 51minutes.

An Eoghan Cahill free kept Birr ticking along but a goal was always going to be decisive in this game and it went to the met in blue and gold. And it was worthy of winning any game as Ben Conneely found Diarmuid Horan with a delightful delivery from defence. Horan, a surprise return to action here, sent it inside to Aaron Kenny, who finished expertly from close range.

It was a great goal, when you take all its parts into consideration and Birr were effectively gone. They did have one last chance to make it interesting as Stephen Loneran bore down on goal in the 59th minute, he tapped the ball in towards an empty net over Conor Clancy but Ben Conneely got back to make a great goal line clearance. Cahill pointed the “65” but a point was of no use to Birr and St Rynagh's closed out the deal with closing points from Ciaran Flannery and the superb Sean Dolan.

Birr gave a great effort on the day and really carried the game to St Rynagh's. Still smarting from their dramatic late county final defeat last year, Birr worked so hard and they deservedly led by 0-12 to 0-10 at half time. There had been little between the sides in that first half – the lead changed hands on four occasions and the sides were level seven times before Birr opened up a tiny bit of ground.

Birr were the better team in the first half but even at that, the writing was on the wall for them. They were hugely dependant on Eoghan Cahill for scores as he got 9 of their 12 points and 8 of them were from frees. St Rynagh's also hadn't found top stride – they were trying hard but their work rate and overall application was not quite as intense as normal. Yet it was clear that they were not far off clicking and the smart money was on them at the break.

From a Birr point of view, the game was really lost early in the second half. They were always likely to need a goal to take this one and they had their chances. Both fell to Niall Lyons but he didn't finish either – the first was deflected out for a “65” that at least Cahill pointed. The other was also put out for a “65” with outstanding goalkeeper Conor Clancy getting behind the ball but this time Cahill was wide. Stephen Lonergan and Barry Harding also missed good chances in this spell and while Birr led by 0-13 to 0-10, and they got back in front after two Aaron Kenny frees had put Rynagh's on terms, the game was slipping from them. Cahill's free made it 0-14 to 0-13 and he also made it 0-15 to 0-14 after Kenny had equalised but a super Stephen Quirke point levelled it in the 44th minute. From the moment that Ronan Hughes got them in front, 0-16 to 0-15 in the 49th minute, this result was only going one way as St Rynagh's got stronger and stronger, winning more and more of the battles.

It is not hard to figure out how Birr lost this game. Eoghan Cahill was the main reason they were so close but he was also part of the reason that they lost – he got 14 points, 13 from placed balls but also had a few misses that he will have been disappointed in, both from play and frees. 14 points is a phenomenal haul and Cahill is a serious scoring machine but can also miss the odd one and Birr also needed other players contributing. Just three more players scored, each a single point, and Birr really struggled to score from play – by contrast nine of the Rynagh's players scored and that says a lot.

Birr also lost out in the power stakes in the all important closing quarter and this also happened them against Kilcormac/Killoughey in the group. While Birr are clearly working very hard at coming back and have some fine young players, some of these are physically small and unless they can develop in this area, they are going to struggle against the St Rynagh's and Kilcormac/Killoughey's. And with Sean Ryan, Michael Verney, Paul Cleary and Stephen Lonergan all in the veteran stages of their careers, it is far from certain that Birr will win a championship in the next few years. The game bypassed too many players here, even though their honesty and desire was beyond reproach.

They can be proud of the way they played and they will wonder what might have happened had they got a goal early in the second half, but they were second best in the wind up.

St Rynagh's will be delighted at their win. They received a major examination. Their traditional match winners, Ben Conneely and Sean Dolan were once again exceptional with Conneely close to his best in defence as he didn't put a foot wrong and Dolan once again inspiring all around him with his work rate, ability to win ugly ball, his passing and his scoring in yet another man of the match display. Conor Hernon, Matthew Maloney and Stephen Wynne caught the eye in defence while Luke O'Connor and Aaron Kenny really impressed in their attack. Both might be slight compared to some of their colleagues but there was so much to admire in the way they showed for the ball, fought tigerishly for it when it didn't come quite right and their classs when in possession.

St Rynagh's also produced a rabbit from the hat here when throwing Diarmuid Horan into the fray after 23 minutes – Horan, a hero last year and an excellent hurler who has spent a good bit of time away, got a crucial point and was very close to having a very good game before being subbed off again in the 54th minute. It was his first game of the year and he was ring rusty, had a couple of poor wides and misplaced passes but also did plenty of good things and the two weeks between now and the county final should sharpen him up a huge amount – with Joey O'Connor sitting out this one because of suspension, St Rynagh's will have a lot of options and selection headaches for the final and that is a very nice position to be in.