Impressive Tullamore conjure up the right answers at the right time

Outclassed Clara in relegation play off 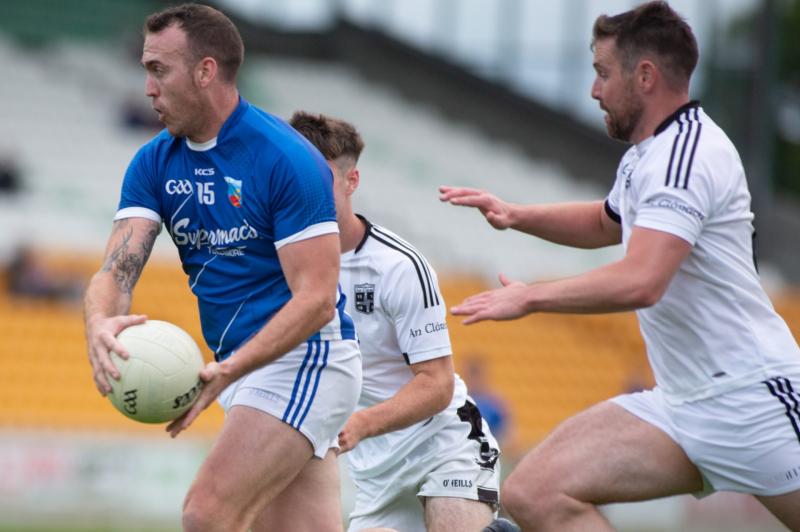 Shane Dooley settled the issue with a wonder goal.

WITH the guns aimed very directly at their heads, Tullamore conjured up the right answers at the right time to book their place in the semi-finals of the Tullamore Court Hotel Senior Football Championship with a way more comfortable than expected win over an outclassed Clara side in Tubber.

A performance of terrific intensity, work rate, honesty and drive rescued Tullamore's season and with Cappincur succumbing to an expected heavy defeat at the hands of Rhode, it meant that the capital town scraped into the semi-finals on scoring difference – they will meet Ferbane while Rhode and Edenderry clash in the other one.

For a shell shocked Clara, there was the stark realisation that their eleven point defeat condemned them to a relegation play off where they will be quite vulnerable against a Bracknagh side who have some potentially deadly forwards – a relieved Cappincur avoided the relegation play off on scoring difference.

This was a huge result and performance for Tullamore. They had made a shocking start to the championship, losing out to Cappincur in their first game and being well beaten by Rhode in their second. Despite, those two defeats, they knew that they still had a great chance of making the semi-finals – Cappincur were never likely to beat Rhode and while they had an eleven point better scoring difference than Tullamore going into this, that was always likely to be closed with them playing the north Offaly side.

Tullamore, however, didn't depend on charity and Rhode doing them a favour. Intsead, they went at it with everything they had and an eleven point win would have put them through, once Cappincur lost at all - never mind the margin there, which turned out to be 12 points.

On an afternoon of high drama, this game was played at a predictably frenetic pace and once the initial settling in period was over, it was clear that Tullamore were the better team – and their superiority grew by almost the minute in a quite superb second half.

Clara started very well and got the opening two points through Luke Dignam and Cormac Delaney (free). They could have been further ahead: Josh Fleming missed a good goal chance and Graham Guilfoyle also spurned two good opportunities, failing to call for marks after winnig good ball as he underhit one and dropped another wide.

Gradually Tullamore settled. Johnny Moloney (free) and full back Pa Robilliard levelled it up and then Michael Brazil put them in front with a good point off his weaker right foot. All of a sudden Clara were sucking for air. Luke Egan extended Tullamore's advantage, though Fleming cut it to the minimum with a free.

In the closing ten minutes of the half, Tullamore upped the ante all over the field, attacking at great pace and young Luke Egan was a revelation. Showing for everything, moving so well on the ball and finishing clinically, he cleaned the Clara defence as he kicked three memorable points in that first half. Almost in the blink of an eye, Tullamore went five clear, 0-8 to 0-3, though Clara did well to rally their forces and steady the ship before the interval – they had rightly pressed the panic button by the 20th minute, making a series of positional and one personnel change. The losers got the closing three points to trail by 0-8 to 0-6 at half time and it was still all to play for.

Edward Cullen got the opening point of the second half for Clara but it went dramatically downhill for them after that. Tullamore had heroes stepping up all over the field as they took complete and utter control. They were relentless in their play – tackling tigerishly, running hard off each other's shoulders and playing with terrific pace and hunger. Eventually, a young Clara side buckled at the knees and caved in.

Tullamore got three in a row, two of them Moloney frees and a fine point from sub Shane Dooley to go four clear by the 41st minute. Four minutes later, Dooley settled the issue with a wonderful goal, blasting a rocket to the net after racing onto a quick Michael Brazil free.

There was no way back for Clara from here and they needed sub goalie Joey Deehan, a replacement for the injured Kevin Meehan, to deny Declan Hogan a 48th minute goal. At this stage, the only issue was Tullamore's winning margin and it was here that they were most impressive. Knowing that it would now come down to scoring difference between them and Cappincur, they went for the jugular – and scored six of the closing seven minutes for a really impressive win.

See Tullamore and Midland Tribune on Wednesday for full report and match analysis.