Player Profiles: Get to know Tina Hannon and Michaela Morkan as they prepare to play for All-Star team

They have been selected to play in European exhibition 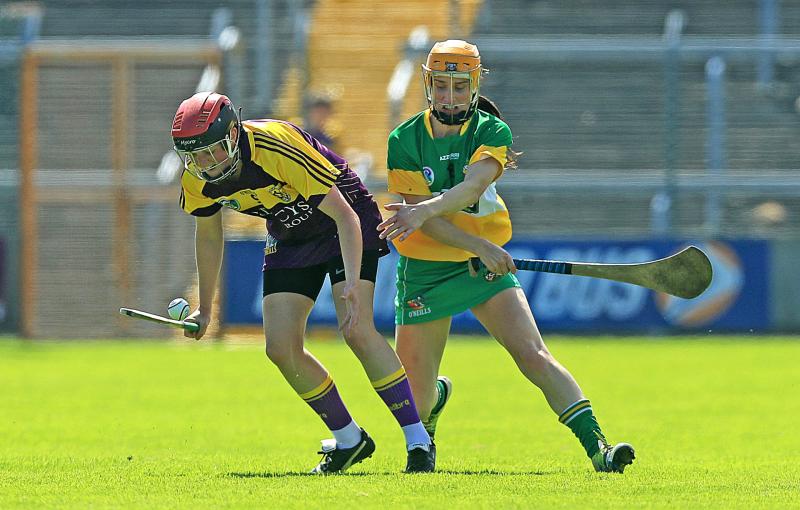 TIna Hannon in action against Wexford

Offaly Camogie stars Michaela Morkan and Tina Hannon have been selected for the Inaugural Liberty Insurance Camogie All-Stars Tour and will play an exhibition game in Spain this Thursday.

The Shinrone and Naomh Brid players have been excelling at club and county level for Offaly over many years, with Tina actually winning an Ulster title with Slaughtneil in recent months.

Two teams comprising the country’s top Camogie stars will jet out to Madrid on Wednesday as Camogie goes ‘On Tour’ to the Spanish capital for the inaugural Liberty Insurance Camogie All-Stars Tour.

Recipients of All-Star Awards from 2016 and 2017 as well as several nominees will play an exhibition match in Universidad Complutense de Madrid on Thursday, November 30.

Here is all you need to know about the Offaly duo involved:

Nominated for all star in 2016, Morkan won Offaly’s first ever senior All-Star in 2008 while still a junior player. Tina Hannon was also nominated in 2008. Morkan was one of the key players on the 2009 Premier junior and 2010 intermediate back to back All-Ireland title-winning teams. Since then Hannon and Morkan have been nominated for senior All-Stars in 2013, 2014 and 2016. Michaela captained Offaly to Intermediate All-Ireland Success in 2010. She won camogie player of the decade last year for Offaly sports partnership. She also won Offaly GAA camogie player of the year in 2016. In 2015 Michaela lived in the UK and flew over and back to play championship games. Morkan is known for her ability to sweep and drive forward and tends to play at number 6. Last year however she lined out at half forward in a bid to increase scoring ability. This meant the Shinrone native racked up 0-37 in five group games, which resulted in her being nominated and winning WGPA player of the month for June by public vote. Morkan has five senior club titles and was defeated by St.Rynaghs last October in her bid for three in a row. 2017 saw her back to her best role and command the game making it a fitting tribute to her service to the faithful jersey to be selected for the team.

After a recent move to Derry, Slaughneil are reeping the rewards of gaining a senior inter-county star in the shape of Tina Hannon. The Naomh Brid native is fresh from an Ulster senior camogie title where the sharpshooter scored 10 points to register her first senior club title. Hannon was also one of the influential players on the 2009 Premier junior and 2010 intermediate Offaly team that won back to back All-Ireland titles. In 2016 Hannon was joint captain of her club who won their third ever junior title. Naomh Brid also reached the finals of the SE Systems Kilmacud Crokes Camogie All-Ireland Sevens where Hannon was awarded player of the tournament. Tina was also awarded the Offaly GAA 2015 player of the year. Hannon is one of Offaly’s key forwards and her introduction in the Leinster Quarter final this year meant her three points in a row saw off a late challenge from Wexford.