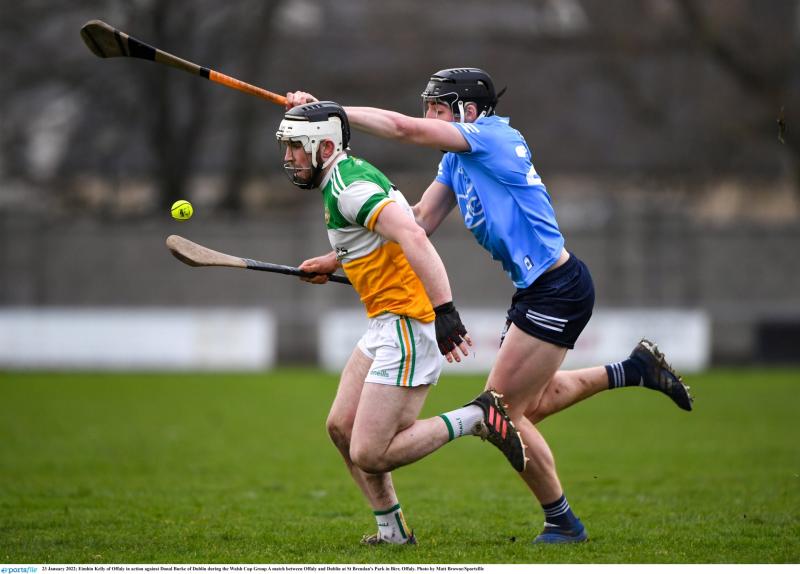 THE real business of Division 1 National Hurling League action is only two weeks away and the real evidence will emerge here but an improving Offaly provided further grounds for hope as they competed well against Dublin in their final Walsh Cup game on Sunday afternoon in Birr.

With a passionate home crowd in a bigger than expected attendance roaring them on in the first half, Offaly played really well to lead by 1-13 to 1-9 at half time. It was an old fashioned type Offaly performance, full of heart and work rate and with some excellent scores being taken, some quality hurling played.

The wind was stronger than it seemed at times, blowing down the field in Offaly's favour and while this was a definite factor in them going so well in that first half, it was still encouraging stuff – clear evidence of a side who want it and are moving forward in the right direction.

A semblance of normality was restored in the second half as Dublin got on top, took control in most sectors, got the scores they needed and won fairly well in the end. It wasn't comfortable for them and just two points separated the sides with nine minutes left but an Offaly win was increasingly unlikely as time drifted away. Dublin got seven of the closing nine points for an ultimately clearcut win but they were forced to dig deep and battle hard for it.

Offaly manager Michael Fennelly will be taking plenty of positives from a Walsh Cup campaign where they competed against Galway and Dublin, and beat Antrim. He will also be realistic. There could well be a rude awakenening in the league but a clearly hungry Offaly side are making progress, trying very hard.

Their skill level and first touch was particularly good in the first half here but in the second half, Offaly were given a glimpse about where there major challenges lie. Dublin introduced subs that made a difference while the Offaly challenge ebbed away as they made changes. It wasn't the fault of the subs that came in. They all tried but Dublin were able to finish much stronger as Offaly seemed to run out of gas.

There was a particular difference in physicality. Dublin had bulkier, stronger players and they were able to power on in the second half. Michael Fennelly is working hard at improving the conditioning of the Offaly side, the players are doing what they have to but this is a medium term project, with no quick fix.

On the day, Conor Clancy, David King, Jack Screeney, Ben Conneely, Leon Fox – the Belmont player relished the physicality of an enthralling game -, Eoghan Cahill as usual, Adrian Cleary and John Murphy were among the players who impressed for Offaly.

The first half was a rip roaring, compelling affair as both sides went at each other with real abandon. It made for excellent viewing and the home support were delighted with the way their side competed.

Offaly led by 1-13 to 1-9 at half time and would have been further ahead only for Eoghan Cahill blasting a sixth minute penalty wide. John Murphy had been fouled as he sped clear of the Dublin rearguard and finished superbly to the net. The advantage should have been given but the referee had the whistle blown and awarded a penalty as well as showing a black card to James Madden.

Dublin had been the better side early on with Fergal Whitley scoring all their points as they went 0-3 to 0-1 ahead. Offaly soon settled and began to take the game to Dublin. They were 0-4 to 0-1 ahead when Brian Duignan got a 16th minute goal, tapping home the rebound after his first shot was deflected onto the crossbar.

Dublin replied almost immediately with a Ronan Hayes goal and a Riain McBride point to level it up. The sides were level on a further three occasions before Offaly finished the half with their tails up. Eoghan Cahill got three frees, the final one a huge effort from inside his own 45 metre line and Jason Sampson got an excellent point from play as Offaly took a deserved four point half time lead.

It was a hugely encouraging first half by Offaly but the wind had picked up in their favour coming up to half time and Dublin were certainly not panicking at this stage.

Dublin began to dominate from the restart. They had the gap back to a point, 1-14 to 1-13 when Riain McBride got in for a superbly taken 43rd minute goal. Offaly to their credit fought very hard. They had much less possession than in the first half and Dublin were now winning most of the physical battles but points from Eoghan Cahill, Adrian Cleary and sub Luke O'Connor meant that the gap was down to a point at three different stages as the three quarter way mark was reached.

Offaly couldn't get on terms, however, and Dublin got four without reply to lead by 2-20 to 1-18 as it went into the last five minutes. David Nally got two frees for Offaly but the gap was never closer than four and Dublin tapped over the final two points for a deserved win.

Donal Burke (Dublin): Dublin introduced subs who contibuted very well and one of them, Donal Burke was instrumental in their win. He came on in the 42nd minute at a stage when Dublin were turning the screw and he really drove them on. Burke was wonderfully sharp as he scored seven points, three from play, three frees and a '65'.