Solid Offaly give their all against experimental Galway 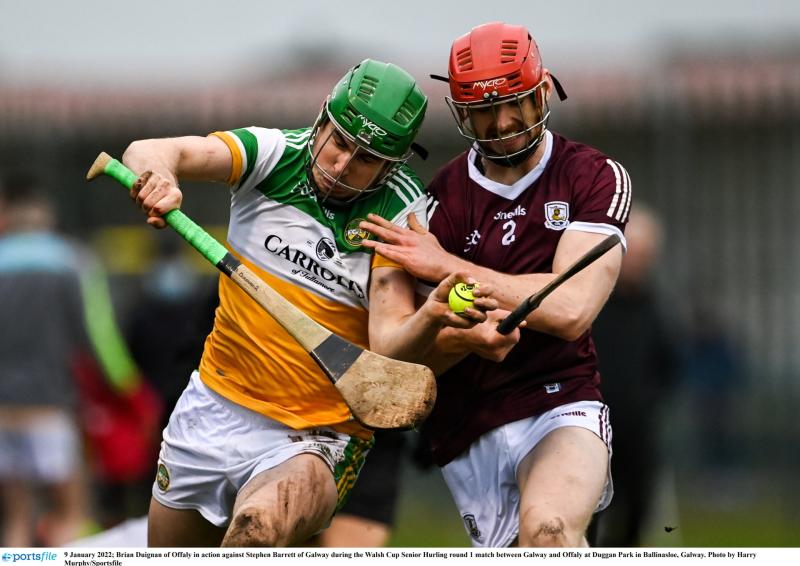 Brian Duignan tries to get past Stephen Barrett

OFFALY will be very aware that the Galway they faced in Ballinasloe in the Walsh Cup and the one they will meet in a few weeks time in the National Hurling League opener in Salthill will be two very different animals. There was, however, plenty of positives for manager Michael Fennelly to grasp on as they ran Galway much closer than the final scoreline of 2-19 to 0-19 might suggest.

Offaly battled with great heart and spirit. They were snapping on Galway's heels up the last fifteen minutes and they weren't far off the mark.

They were just a point behind, 1-16 to 0-18 when Galway got in for a soft second goal with sixteen minutes left. Sub Conor Hardiman couldn't gather the ball as Offaly defended poorly and Donal O'Shea applied the finishing touch.

That goal sapped the resistance out of Offaly and there was no way back for them. They emptied their bench in the second half and like the footballers in their O''Byrne Cup defeat by Dublin, the emphasis was on giving players a chance and getting them out on the field. Galway scored three of the last four points with Offaly goalkeeper Stephen Corcoran saving a 65th minute penalty from O'Shea.

The result was not important here but the performance was. Offaly certainly gave it what they had, they worked very hard and they were clearly eager to impress. The display does come with a warning sign in neon lights as Galway were very experimental and it will be a vastly different side that Offaly will face in the league opener.

As it was, Offaly will be aware of the step up in physicality and fitness that awaits them in Division 1. Some of this Galway team were well ahead of Offaly in this regard but the players are working very hard to improve their conditioning. That won't happen in time for Division 1 this season but all they can do is try and improve and they are doing this.

There was a lot of encouraging aspects in this performance. Collectively, they showed how much they wanted it and individually, there were excellent displays from Ciaran Burke, Ross Ravenhill and Eoghan Cahill. Cahill was brlliant in the attack, scoring 11 points, six from play, before fresh legs were thrown in, Burke was rock steady on the edge of the square at full back while Ravenhill showed how good he can be, doing the simple thing very effectively and spraying in good ball to the attack.

There were plenty of other solid displays with David King, debutant Conor Molloy, Killian Sampson and Brian Duignan catching the eye at different times. It is also important to be realistic. This team will find it hard to breathe in Division 1 hurling and there are very stiff challenges ahead but this was a decent, respectable and acceptable display.

It was a very enjoyable, keenly fought game. It was Henry Shefflin's first game as Galway boss and this heightened interest in it with the permitted attendance of 2,500 selling out well in advance. There was plenty of good hurling and the commitment on show was higher than normally produced in the Walsh Cup.

Offaly played some very good hurling in the first half. They competed very well with Galway in every facet of play and were unlucky to trail at half time by 1-12 to 0-13. Offaly's first half display warranted at least a share of the spoils at half time, if not the lead.

The difference was a 34th minute goal from Brian Colcannon. That goal came out of nothing after a goalmouth scramble and gave Galway a 1-12 to 0-11 lead. Offaly recovered well with points from Brian Duignan and Eoghan Cahill. That Cahill point summed up everything that was positive about Offaly's first half display. Stephen Corcoran did well to win the ball on the edge of his square, it went through the hands of David King, Ben Conneely and Killian Sampson who arrowed over a beauty from the right wing.

Cahill had been wonderfully sharp in the first half. He got seven of the 13 points, five from play and also had a couple of wides that he would have been disappointed in. He is now very much Offaly's star forward and he caused Galway considerable problems.

There was very little between the teams throughout. Galway got the first two points but Offaly hit back with four to take a deserved lead as they tore into the home side. Galway went 0-5 to 0-4 ahead and then opened up a 0-8 to 0-5 lead as their power began to open up Offaly. Offaly responded very well to adveristy in the first half. They got the next two points but then conceded three on the trot to Galway who led by 0-11 to 0-7 after 25 minutes.

Four in a row from Leon Fox, Jason Sampson and Eoghan Cahill (two, one free) brought Offaly right back into it, 0-11 each before those late scores saw Galway lead by two at the break.

Offaly continued to perform very well in the third quarter. They had the gap back to just a point, 1-16 to 0-18 and it looked like a morale boosting win was in touch until that second Galway goal.

Eoghan Cahill (Offaly): Eoghan Cahill had a magnificent game before being replaced. His scoring statistics and the volume of ball he got on says all that needs to be said.