Battling Offaly not quite strong enough for experimental Dubs 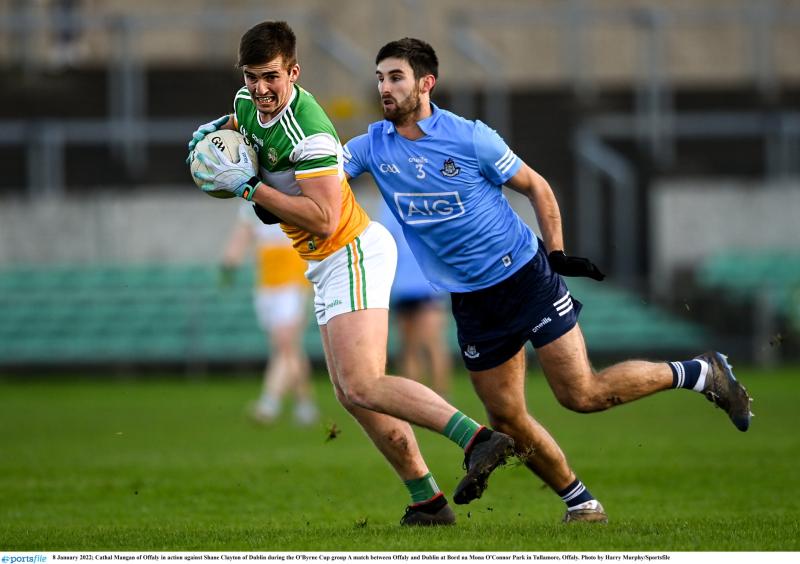 A DECENT and very hard working display by Offaly was still not good enough when they went down to a five point defeat against an experimental Dublin side in the O'Byrne Cup in O'Connor Park on Saturday afternoon.

Offaly were closer to the win than the final scoreline of 2-12 to 0-13 suggests. They were on Dublin's heels throughout the second half and were only a point behind, 1-10 to 0-12 with ten minutes left.

They were just two points behind with the 70 minutes almost up but an excellent Warren Egan goal after a great build up in the 69th minute put Dublin out of sight. Ciaran Kilkenny immediately floated over a lovely point and the game was up for Offaly, who got a late free through sub Jack Darcy.

Dublin were the better team over the 70 minutes. They had a few familiar faces thrown in with less known ones and they did play marginally the better football. They definitely finished stronger as both sides introduced a spate of subs in the second half – Offaly certainly wouldn't have taken off Jack Bryant and Bill Carroll if this competition was a priority for them but blooding players and giving them a fair chance was the obvious intention of team management.

Offaly weren't far away at all and it wouldn't have took a whole lot to have won this game – they missed two great goal chances that would have made a big difference in the first half while Dublin converted their openings.

There were some very encouraging individual displays. Two of the 2021 U-20 stars, Lee Pearson and Jack Bryant looked particularly well equipped to flourish at this level. Pearson's pace stood out while he turned over good ball and tackled very efficiently. Bryant once again showed that he has something special. The Shamrocks man didn't get on the scoresheet but was involved in a lot of the best things that Offaly did in the first half, winning hard ball and using it well.

Ruari McNamee had an excellent game beside Bryant in the full forward line. He showed how good he can be and top scored with five points, two from play. Anton Sullivan also had a productive afternoon, scoring three points from play and working hard.

Elsewhere, Ciaran Donnelly and Johnny Moloney impressed in defence. Jordan Hayes moved the ball well at midfield while Cathal Mangan was very solid beside him. Bill Carroll had a super few minutes at the start of the second half as Offaly took the game to the Dubs – he was taken off in the 54th minute.

With games to come against Longford and Louth this week, Offaly will be hoping to get as much game time as possible into the new additions to the panel before the really serious business begins with a National Football League Division 2 opener in Clare at the end of January.

There was plenty to be happy about with Offaly's performance. They might have took a bit much out of the balls at times but they were hard working and honest. Their players were clearly eager to impress and while the step up was obvious for some of the newcomers, they tried hard and were always trying to do the right thing – players such as Diarmuid Egan and Morgan Tynan have plenty of work to do to learn the ropes and develop physically at this level but it was great experience for them and their appetite is encouraging.

Offaly were very solid when playing against the wind in the first half. They were slow to settle, conceding three quick points but they were very competitive from the moment Ruari McNamee opened their account with a 10th minute free.

McNamee got Offaly's first four points and Morgan Tynan got in on the scoring act when he got a 27th minute point, slotting over despite shipping a heavy hit, to leave Offaly trailing by 0-6 to 0-5.

Dublin wing back Sean Bugler got foward for three first half points while corner back Lee Gannon got a point. Offaly corner back Ciaran Donnelly also got on the score sheet in the first half, booting over a great run to make it 0-7 to 0-6.

Offaly competed very well though Dublin looked like scoring every time they got forward. Offaly should have got two first half goals. Jordan Hayes blasted against the cross bar in the 21st minute after Jack Bryant sent him in while Bryant was caught off balance when a mishit Morgan Tynan free fell for him in injury time. The ball eventually found its way back to Anton Sullivan who pointed to leave Offaly trailing by 0-9 to 0-7 at the break.

Dublin made a crucial breakthrough with a soft goal from wing back Tom Lahiff in tjhe 36th minute and Offaly did well to get back into the game. Anton Sullivan (two), Ruari McNamee and Bill Carroll pointed as they brought the gap back down to a point, 1-9 to 0-11. Johnny Moloney's excellent point made it 1-10 to 0-12 but the team that finished wasn't strong enough to claim the wind. Ciaran Kilkenny stepped up to the plate as you would expect for Dublin and they stormed across the finish line.

Sean Bugler (Dublin): Sean Bugler had a fantastic game for Dublin. He attacked at every opportunity and four points was a great return for a half back.