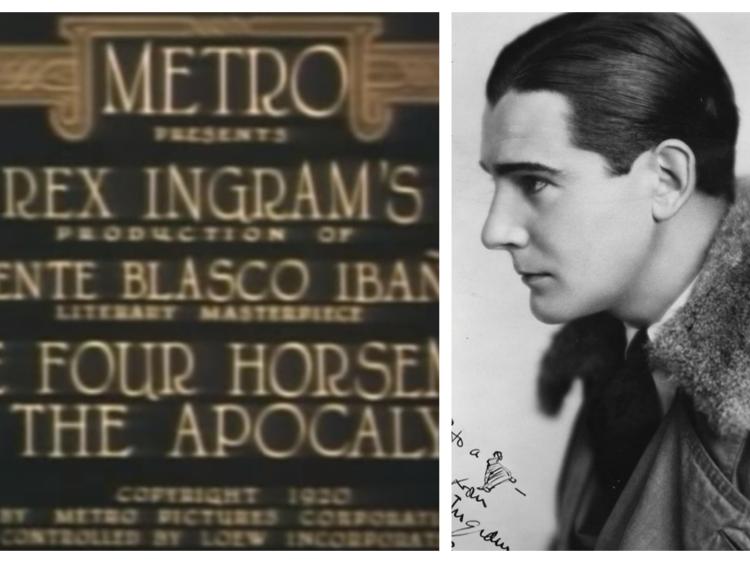 Born at 58 Grosvenor Square, Rathmines, in Dublin, Rex Ingram is best known for his movie The Four Horsemen of the Apocalypse which released in 1921. He was the cause of the succession for Metro Pictures that topped  the box office and went on to be hailed as masterpieces.

During his early childhood years he moved from parish to parish, a result of being the soon of a Church of Ireland rector. Finally his family settled in Kinnitty in Co. Offaly where his father was the local rector. In 1904, Ingram was sent to St Columba’s College, which was an elite boy’s school in Dublin.

Ingram was a so-called loner and rebel during his schooldays, so much so that his friend R.D. Greer once described him as, ‘a rebel at heart' who 'had a discomforting disdain for authority and whose escapades brought him into close conflict with those responsible for discipline.' Rex actually once challenged a master at his school “to lay down his robes and come out behind the ‘gym’ and see who is the better man.”

At fifteen years of age a tragedy struck Ingram's life when his mother died. Perhaps due to his failure to gain a position at Trinity College Dublin, or a simple lack of opportunity in a small country, Ingram left emigrated  to America in 1911.

Ingram got his start in the world of film at The Universal Film Manufacturing Company where he started directing the short film The Symphony of Souls, released in 1914. Ingram’s second film Broken Fetters was a real marvel when released in 1916, and it resulted in his name reaching the level of critical acclaim.

His subsequent silent movies brought huge success and at the height of his fame, he was ranked alongside the likes of D.W. Griffith and Erich von Strohiem, two of the foremost artists of the beginning of the moving pictures era. He found a new star in Ramon Novarro, who acted with Rex Ingram in The Prisoner of Zenda in 1922. He's also credited with discovering tragic 1920s sex symbol and Hollywood heartthrob, Rudolph Valentino.

In 1921, Rex Ingram's real legacy piece hit the screens in the form of the film widely considered as the first real anti-war production, The Four Horsemen of the Apocalypse, starring Valentino. It was based on the Spanish novel of the same name and went on to become the highest-grossing movie of that year, beating Charlie Chaplin's The Kid to the top of the list.

After his first marriage failed, Rex met Alice Terry and soon remarried. He cast her in the lead in most of his films after their meeting and for her contribution to the motion picture industry, she has a star on the Hollywood Walk of Fame.

After falling out of love with Hollywood and moving his entire production team to the Victorine Studios located in the South of France, he continued to make his romantic melodramas, which were regularly set in North Africa, ending with Baroud in 1932. Ingram retired from filmmaking when talking pictures usurped his silent art.

For his contribution to the motion picture industry he too has a star on the Hollywood Walk of Fame. Ingram died of a cerebral haemorrhage in North Hollywood on the 21st of July in 1950 at the age of 58. He is buried in the Forest Lawn Memorial Park Cemetery in Glendale, California.

If you'd like to read more about Rex Ingram, check out a Trinity College study into his life Here.