Remains of burnt out caravan left on footpath in Edenderry 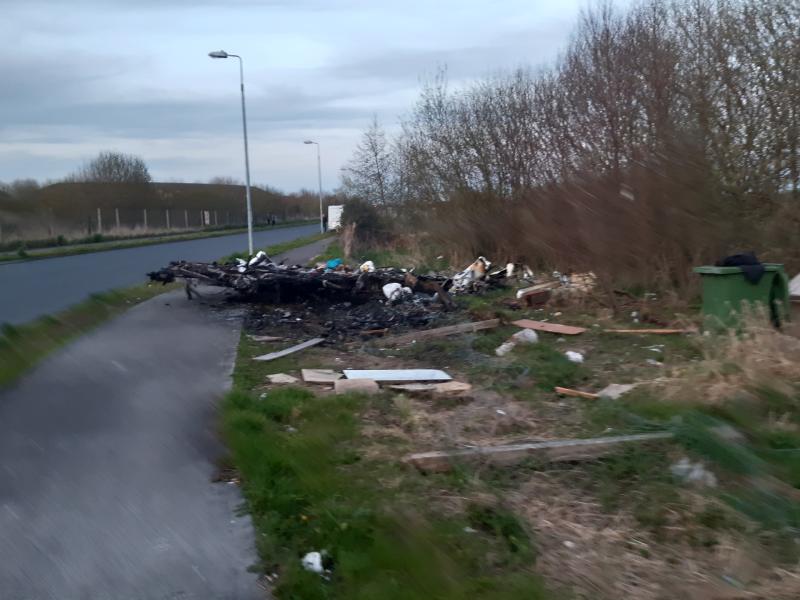 The remains of a burnt out caravan in Edenderry

The remains of a caravan are on a footpath on the back road close to the Dunnes Stores shopping centre in Edenderry.

It is about 100 metres from another caravan where a Traveller family are still residing.

The abandoned caravan had been burned out in the last month.

Cllr Noel Cribbin told a meeting of the Edenderry Municipal District on Wednesday – held using the Zoom teleconferencing techology that the family had “absolutely destroyed the place down there” and when he went for a walk he was attacked by a dog.

He said the issue had been going on for two years and was being “passed from Billy to Jack”, resulting in part of the area becoming “like a landfill”.

The Fine Gael councillor also alleged anti-social behaviour in the town centre and claimed the gardai were “doing very little”.

“What are the plans for the Travellers in Offaly? We have no Traveller accommodation here either for a housing scheme or for parked caravans,” said Cllr Cribbin.

While Edenderry did not have official Traveller-specific accommodation, he knew other places in the county did, and he was aware the council had “unspent” money.

“I'd like to know what's going to be done with that money, where is that going to be spent, will that upgrade the Traveller accommodation they have in Tullamore,” he said.

He asked if the family currently residing in Edenderry could be accommodated in Tullamore, saying their current location had “no water, no sewerage, no nothing”.

Cllr Eddie Fitzpatrick, chair of the Edenderry District, said he was sure the gardai would address issues that needed to be addressed by them.

“I know it's a serious issue in relation to the dumping that's ongoing there and the caravans,” said Cllr Fitzpatrick.

Sharon Kennedy, director of service with the council, who warned Cllr Cribbin about making statements about identifiable individuals in a public meeting, said efforts were being made by the local authority and she appreciated and understood the councillor's concern.

“The housing section is trying to resolve a number of issues with regard to unauthorised parking and trying to get some interim arrangements for Traveller families who are parked illegally or on the sides of roads, particularly in regard to the issue presenting associated with Covid-19,” said Ms Kennedy.

“I appreciate this issue is long before Covid-19, I fully get that. The housing section is continuing to look for solutions. It is quite difficult.

“The Tullamore halting site is full so there's no capacity to take a family in from Edenderry at this point in time.”

Cllr Cribbin repeated that he wanted the gardai to be contacted by the council, and said he had made contact with them himself previously.

He said he would like to have a meeting on the issue and would like a reply from the gardai in writing.

Ms Kennedy told him: “We certainly will make contact with the gardai but at this point in time all the agencies of the State are under severe pressure in order to manage so many issues that are arising as a consequence of the current situation”.

She asked Cllr Cribbin to understand that everybody was in a situation where they were trying their best during the coronavirus crisis.

“We'll contact you and include you in the resolution of the [housing] issue. A resolution is quite difficult to reach and we would appreciate any input into it.”

At the March meeting of the Edenderry Municipal District Cllr Cribbin said there was “fear among people” in the area.

“People use that area a lot for walking because it's safe, there's footpaths and public lighting. And these people are just causing pure havoc. I think it's time now it's sorted,” he said.

The Tidy Towns committee were doing their best for Edenderry but the issue with the caravans was persisting.

“It's not on. It's not fair,” said the councillor.