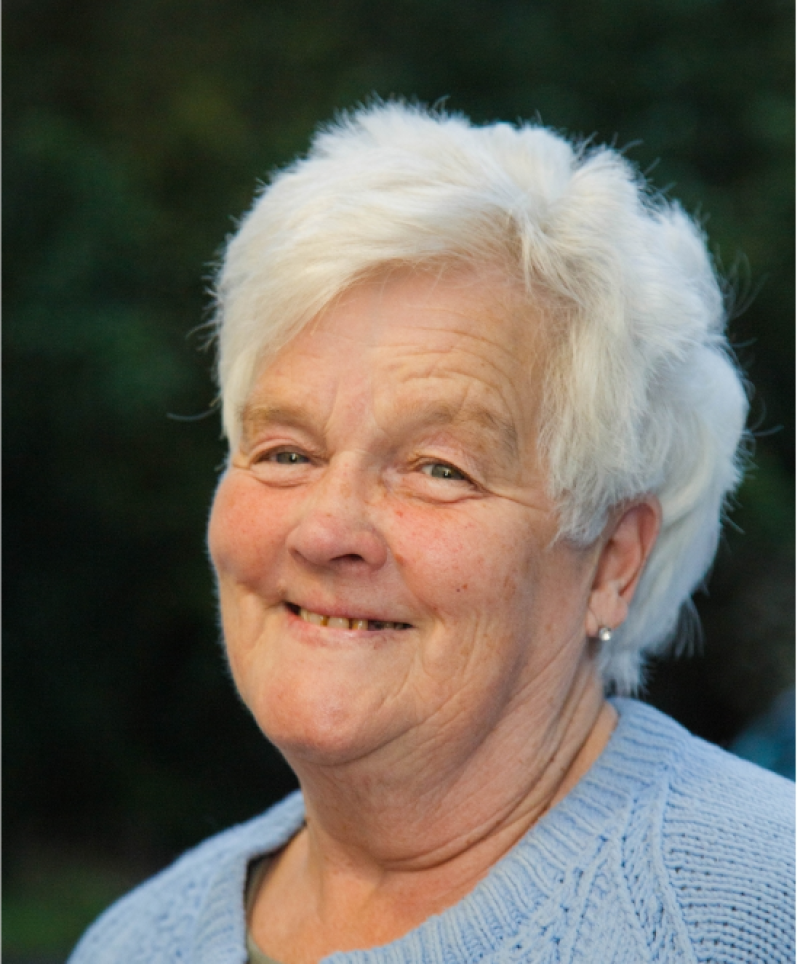 FULL of life and vigour, a lady to contend with but with a heart that was kind and loving – the inimitable June Martin died unexpectedly last Thursday, November 19.

A native of O'Molloy Street, June, who was a former nurse, was heavily involved in the day to day life of Tullamore and she gave of her time cheerfully and generously.

''She always wanted to be a nurse,'' her first cousin Tadhg Lambe said. She trained in London in the 1960s and worked there for a while and also in Oxford in England. She did her midwifery in Altnagelvin hospital in Derry and spent six months there before she returned to Tullamore. She finished her nursing career in Tullamore in the year 2000.

June spent her life caring for others. When Tadhg's father John [Jack] developed Alzheimer's disease she moved into his house on Arden Road and took care of him for 10 years.

This was a source of great comfort to the Lambe family, as Tadgh said otherwise their father would have had to go into a nursing home as the family were unable to care for him.

June also took care of her own parents William and Bridie. When her father had a stroke she nursed him and brought him around in a wheelchair and similarly with her mother who developed multiple sclerosis.

She took a great interest in her local community and was on many committees. One of those was the Offaly Joint Policing Committee, where she often read reports into the meeting.

A colleague on the committee Mary Delaney said: ''I have known June for many years through our work on the Joint Policing committee.

June was a strong advocate of the impact of crime and anti-social behaviour on the people in Offaly.

She made sure that issues were addressed and always strived to make things better.

I was shocked to learn of her untimely death and she will be badly missed.''

She was also Chairperson of the Offaly branch of the Multiple Sclerosis Society. Committee member Aine Smyth remembers her as capable and kind:

''I can't remember how long she was on the committee but it was many years. She organised outings in the summer to Galway and to the Japanese gardens in Kildare and we would have a meal after. She organised the Christmas party for many years in the Court Hotel.''

Aine had a long association with June and worked with her in the Connaught Royal hospital in Walthamstow, in Essex.

''It was 1964 when I went to do training. June had been at the hospital and had done her finals. She was very kind to everyone that came to the hospital and would come with a pot of tea, she looked after everyone.''

Aine said she was very shocked to hear that June had died ''We will miss her and her white hair as she walked up and down the town,'' she added.

Offaly History wrote this tribute to June: ''We wish to be associated with the tribute to the late June Martin who was very much a part of Tullamore. A nursing sister in Tullamore General Hospital she was active in all medical charities and was one of the founding committees of the Save the Hospital Campaign in the mid-1970s. She never tired or wavered in her support for the voluntary sector.

Her father had literally helped build Tullamore and she was immensely proud of his role and of her beloved O'Molloy Street where she lived.

She was a woman of frank views on many subjects not least being the naming of nearby Main Street when she managed to raise it at a meeting about free parking for 30 minutes in the town centre in 2012. Her role in saving the hospital (with others) will rank as her greatest achievement of many in her lifetime. She will rest in peace and deservedly so. Truly we shall not see her like again. O Death, where is thy sting? O grave, where is thy victory?''

June's funeral took place yesterday morning Tuesday November 24 in the Church of the Assumption, Tullamore.
Parish Priest Fr Joe Gallagher, described her as practical and realistic. He said she had been taken suddenly, but she had lived with the experience of sudden death in her own lifetime when neighbours and friends passed away. She may not have expected her own death to be so sudden, but she was ready, he said.

Fr Gallagher said that in many ways she was at her very best when she was looking after people and she rose to it time and time again. She was very close to her family and especially her sibling Paddy and went over to England to be with him on a regular basis, indeed she had organised Christmas gifts for the family, he said.

She was also very close to her aunt Julia and her husband Jack Lambe and when they came into ill health June was always there and took great care of Jack when he was sick. She was also very close to Sister Columba Lambe who died recently.
June had  a very generous heart and she found it tough when some of the younger members of the family died, especially Betty Darby and Josh Donnelly, said Fr Gallagher.

He said she was a ''straight talker. ''If she had something to say she certainly said it,'' he said.

He also spoke of how she was always the first there if she was needed. ''We all remember June at church gate collections standing outside the church.''

She was a familiar face at funerals in the church too, as the funeral was leading out she would be there sitting at the edge of the seat ready to pay her respects, recalls Fr Gallagher.

''She walked everywhere, she didn't stroll along, there was a real sense of purpose, she had that purpose to life.''

She has always had that spark to her and appreciated people and life, all that was underpinned by her deep faith which was down to earth and practical, commented Fr Gallagher.

''June's time of preparation is done and we pray she will be with Christ in eternal happiness and peace,'' he said. Afterwards, June was laid to rest in Clonminch cemetery.

June was predeceased by her parents William and Bridie. She will be sadly missed by her loving brother Patrick and his wife Catherine, nieces Fiona and Sharon, nephew Dermot, grandnieces Emily, Harriet and Darcy, grandnephews Quinlan, Digby and Donnie, relatives, neighbours and her many friends.