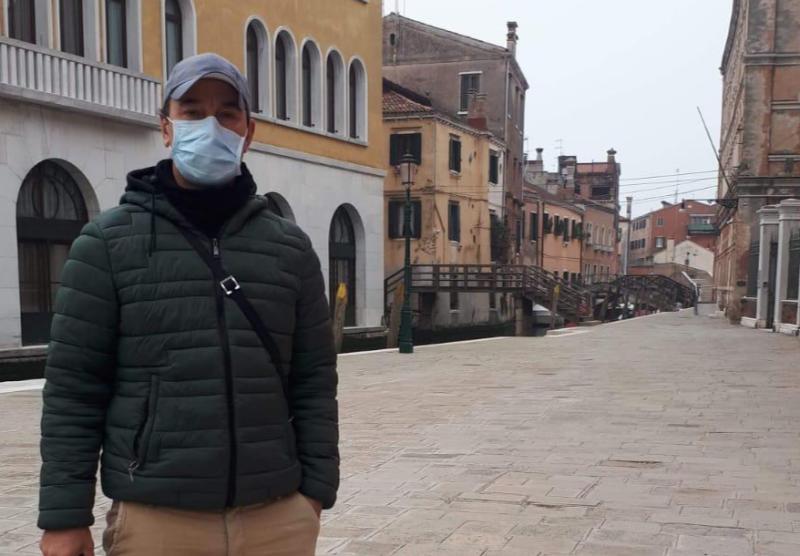 Having lived in Venice for almost 20 years, it is a very different city under quarantine now than the one Tullamore man Derek O’Reilly fell in love with  two decades  ago.

He now lives in the very  centre  of the Coronavirus pandemic, with Italy currently the hardest hit country in the world.

The native of Marian Place in Tullamore was a footballer of some note in his youth,  with most people  knowing him as  Shaggy, a nickname earned  thanks to  his flowing locks. His family was a well-known  and respected  one in the town through  their business,  O’Reilly’s Bakery.

In his mid-twenties, Derek left Ireland in August 1995  and made his  way to Glasgow  in  Scotland for  his  sister’s wedding. After  that  he ventured  down to Oxford  in  England and lived there from 1995 to 1999.

“It was there I met my girlfriend/partner of 25 years and when she finished her studies in  Oxford  she decided to return home to Venice Italy and asked  me  to come along. I fell in love with Venetian life and 20 years later I’m still here,” he explained.

An idyllic life followed in the  spectacular  city of  100 islands in a lagoon in the Adriatic  Sea.

No one could have predicted what would follow and up to Monday of this week deaths for civilians had reached  11,591 plus the deaths of 60 doctors  in Italy.

“As we seem to be approaching the virus’s  peak,  we’ve been losing almost 1,000 people a day. For the last 2 days however, the daily death tolls have decreased, it’s too early to determine whether this is a trend or not. We are just hoping and praying that the fatalities and people infected are on the decline!” Derek said.

The situation in Italy is several weeks ahead of what Ireland is now encountering, and the country has pretty much remained indoors for a fortnight.

READ THE FULL STORY IN THIS WEEK'S TULLAMORE TRIBUNE