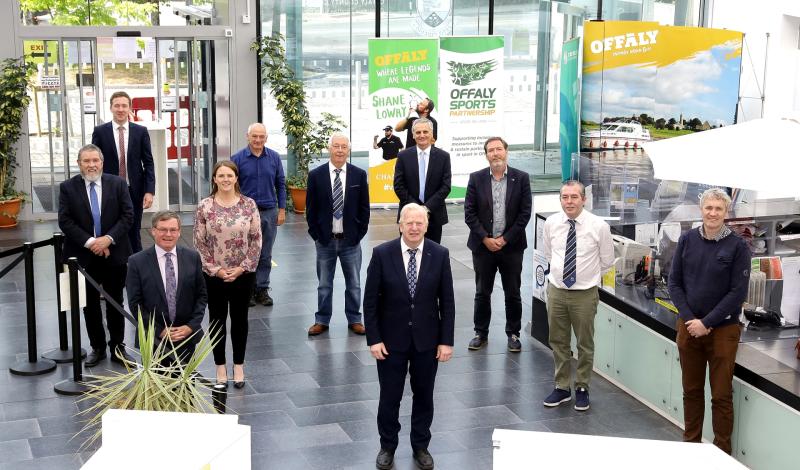 Members and officials of Tullamore MD after the AGM

Cllr Owens was unanimously elected to the post at Thursday's AGM of the body with his Fianna Fail party colleague, Cllr Tony McCormack also elected unopposed to the Leas-Cathaoirleach position.

Fianna Fail, with four out of the seven seats, have overall control of the body and were asked to consider electing a member from the “other side of the house” during the council's five year term.

Tributes to the outgoing Cathaoirleach were led by Independent member, Cllr Sean O'Brien who noted he had to deal with a “few very obstreperous members after the local elections.”

“But you were very fair and patient with us in a year when a lot happened,” said the councillor.

Indentifying himself as one of the “obstreperous new councillors”, Fine Gael's Neil Feighery said the outgoing chairman had been mindful of the fact that it was the new members first term.

“We got a fair crack of the whip always,” he added.

Cllr Ken Smollen, Irish Democratic Party, who described himself as one of the “three newbies”, agreed the outgoing Cathaoirleach had been very fair and represented Tullamore and district very well.”

Cllr Declan Harvey observed that the first year of a new council meant a “tough job” for the chair but Cllr Moran had filled the role with great success.

The outgoing Chairman “fought tooth and nail for the people of Clara” noted Cllr McCormack while Cllr Owens said a lot had been achieved during the past 12 months.

Director of Services, Tom Shanahan thanked the outgoing chairman for the courtesy and co-operation he and the officials had received during the year.

He also welcomed the extension to Clara graveyard and said he was delighted that new, fully tarmaced car parking facilities will be provided there.

“One of the major developments was the purchase of the priests house in Clara which has huge potential going forward,” outlined Cllr Moran who also welcoming works on the New Road in Clara Bog.

Welcoming the construction of houses at Raheen, he said it would be the first local authority housing estate to be developed in Clara in 20 years.

Cllr Moran also paid tribute to the other members and officials for their co-operation and work during the year.

Prior to Cllr Owens unopposed election, Cllr O'Brien said he had “no doubt that in the five years of the council you [Fianna Fail] will give us the chair for one year out of the five.”

Cllr Feighery noted that Fianna Fail had the numbers but hoped “that in future years in the interests of democracy that members of this side of the house will have a chance to fill the position.”

He said he was glad to see a fellow Killoughey man take the position and wished Cllr Owens well for the coming year.

Cllr Owens, in a brief acceptance address, promised to be a impartial chairman at all times.

“We're in challenging times of staying at home and social distancing,” he pointed out adding: “We're living in a new normal that will affect the council in what we do.”

Cllr Owens said he looked forward to the completion of the Tullamore Town Enhancement Scheme and also referred to the Tullamore 400 celebration which will be marked during the coming year.