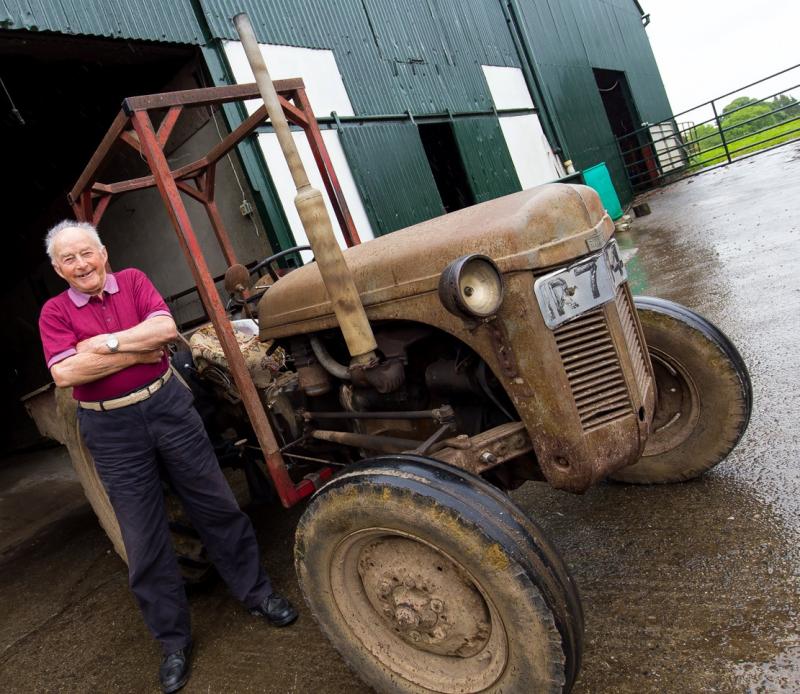 The late George Griffith pictured with his trusty grey Ferguson on his farm at Clonshanny, Clara. Pic: Tom O'Hanlon

LAST week was truly the end of an era in Clonshanny, Clara with the sudden passing of 97-year-old George Griffith.

A popular member of the farming community, George was actively farming up until the time of his death and was blessed with a zest for life the envy of many less than half his age.

In latter years, George assisted his son Geoff farm the Griffith holding at Clonshanny to which he has added to the acreage over the years and resided with his wife, Daphne.

The Griffith family have farmed in Clonshanny for centuries George told the Tullamore Tribune when we met him and his wife, Daphne, in June 2017, for the first in our revived series of 'Tribune People' interviews, at his cosy farmstead fronting the Clara to Ballycumber road which he constructed in the early 1960s.

George met Daphne when she worked in the office in Ranks Flour Mills in Clara. "At the time people said we were meant to get married and I can now say it was best day's work I ever done," outlined George in 2017.

"I used to go to Ranks every week to get pig meal and that's how I met Daphne . . . I got more profit out of pigs than any farmer in Ireland," he joked.

Prior to getting married, George loved cycling to dances mainly in the Parochial Hall in Clara and St James' Hall in Kilbeggan with lads of his own age.

Threshings were also a feature of rural life at the time and neighbours all pooled together to help each other get in the harvest. The threshing mill in the area was provided by Peter Byrne, from Derrycooley, and each year George helped with 20 to 25 threshings in the wider Island and Ballycumber areas.

Despite his fond memories, George didn't have a rose-tinted view of the past as times were often tough economically for families, including his own.

He also remembered the drudgery of farm work and declared: "No one in Ireland works hard any more."

George's able assistant on the farm for over 60 years has been his grey Ferguson tractor which he bought for the princely sum of £500 from Tullamore Motor Works in 1955.

Before the tractor era, George started working with horses at the age of 16 and reckoned he walked thousands of miles after horses over the years

George was also a committed member of the Church of Ireland parish and regularly attended services in St Brigid's Church in Clara.

He also had a keen interest in sport and his daughter Lorna is married to former Offaly GAA star, Tubber's John Moran, while his other daughter Gillian is married to retired Westmeath referee Tom Duffy.

George's grandson, Scott Griffith is a talented GAA and soccer player as well as being an accomplished athlete.

In his youth and for much of his life one of the highlights of the year for George and his family and friends was the annual trip to the RDS in Dublin for the Spring Show. This excursion has now been replaced by the National Ploughing Championships and the Tullamore Show, of which George was selected the inaugural "Grandfather of the Show" some years back.

George passed away suddenly on Thursday afternoon in his farmyard at Clonshanny while tending to livestock.

His remains reposed at his home on Saturday afternoon with huge crowds visiting to pay their respects to the deceased, an indication of his popularity and the high esteem in which he was held in the community.

The Funeral Service was conducted on Sunday afternoon by Rev. Isaac Delamere, Rector and burial was immediately afterwards in the adjoining churchyard.