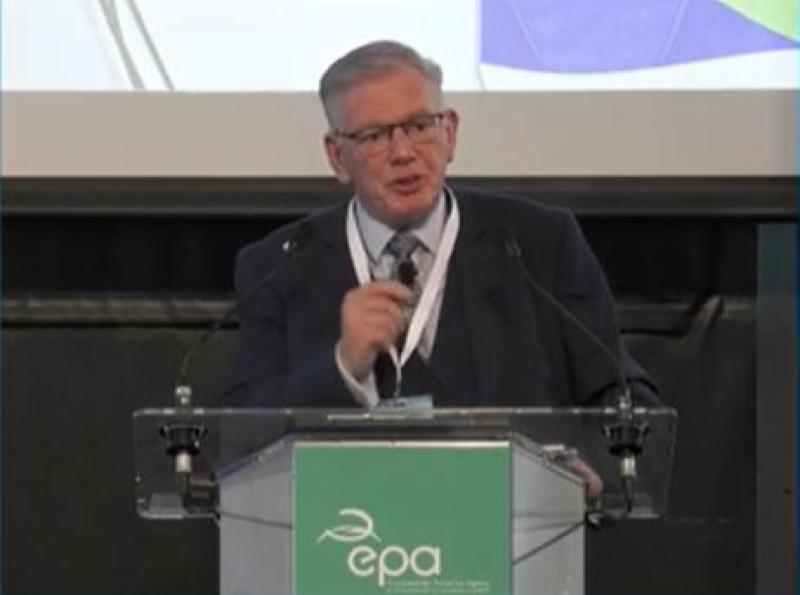 SKILLS training is crucial to achieving a just transition from peat to a green economy in Offaly and the wider Midlands, a leading manager with the Laois & Offaly Education and Training Board (LOETB) said last week.

The conference was addressed by experts on climate change across a number of disciplines and its theme was Creating Ireland's Climate Future.

In his speech, Mr Boland focussed on what he believed must be done to deliver the so-called just transition, especially in a county like Offaly where educational attainment has been very low for communities which previously relied heavily on a peat-based economy.

Mr Boland, a Ferbane man whose background is in youth work and community development, told his audience that he had also previously been a manager at Bord na Mona's Lough Boora Parklands and he detailed how his grandfather, the late Eddie Joe Dooley, had been a lifelong employee of the turf company.

Born in 1916, Eddie Joe had lived a “life less ordinary”, said Mr Boland, revealing how Mr Dooley's wife died when she was only 43, leaving him with nine young children, the youngest of them one-year-old twins.

“He took a hands on approach to parenting and grandparenting. He also represented the Ferbane Electoral Area in west offaly for 43 years of his life, a local public representative at a time when it was voluntary, at a time when there were no mobile phones, at a time when his own house had no running water,” he said.

In 1939 Eddie Joe joined Bord na Mona's predecessor, the Turf Development Board, and he went on to spend 43 years with the company.

Though he was elected as a Fianna Fail councillor, was chair of the council and a recipient of the Offaly Person of the Year award, Mr Boland said his grandfather's proudest achievement was what the “largely uneducated Bord na Mona operators, bog operators” had managed to do.

“They were bog operators that took massive machinery, coming in, in the 1940s and '50s from Russia and Germany, and they were able to adapt those machines to the unique Bog of Allen conditions that they faced on a daily basis in their boglands,” he said.

“These were west Offaly men, bogmen, BIFFOs, but they were able to provide local solutions to local problems.”

Mr Boland also said he was glad his grandfather did not live to the realisation that he was “part of the decimation of Ireland's rainforest”.

“That would have killed him if he hadn't gone before now. Because he was a man who loved nature and loved the environment.”

He said Bord na Mona had been set up to provide employment by using the only available resource in the Midland counties and it is the successors of Eddie Joe Dooley who must now not be left behind.

“I'm talking about communities that were marginalised and disadvantaged before Bord na Mona ever opted to go from brown to green,” he said.

Across Ireland 33% of those over 15 have third level education but in areas like Daingean, Kilcormac, Ferbane and Edenderry, the equivalent figure is just one-third of that.

Nationally, 12.5% of people have either no formal education or primary only, but in the peatland communities the rate is 23.5% in places.

The 2016 census also revealed that 8.1% of workers nationally were designated as “professional” but the equivalent proportion in Daingean was only 1.1%. The proportion of the national workforce deemed “unskilled” was 3.6% but in Daingean it was 7.6% and in Kilcormac 6.6%.

“But every cloud has a silver lining,” declared Mr Boland, saying that the programme of collaboration between the EU, the Government, the agencies around the Midlands and the stakeholders, is a “genuine plan” which provides a pathway towards just transition and towards enabling communities to “transition towards a sustainable future based on a green future”.

He identified regional development and job creation as key elements of the transition but warned: “It is based on the theory that a rising tide lifts all boats. And it may well do, but the individual or the community who doesn't have a boat when the tide rises, is in danger of being drowned, and very often that's the low level that the peatland communities are at.”

The focus therefore must be on social inclusion and active inclusion and in the LOETB a pathway had been developed towards the skillsets required for “a currency in the labour market of today and tomorrow”.

He mentioned retrofitting and bicycle engineering as examples of skills which will be required in Ireland's critical growth areas.

Mr Boland concluded: “We believe that this approach will ensure that this is not just a transition, but it is a just transition. That it will enable all of us, even those of us living in the peatland communities, to share in the National Economic and Social Council's vision for our society – to become a resilient, sustainable, net zero carbon economy, environment and society, using innnovation and collective preparedness to shape the future we all want to achieve.”