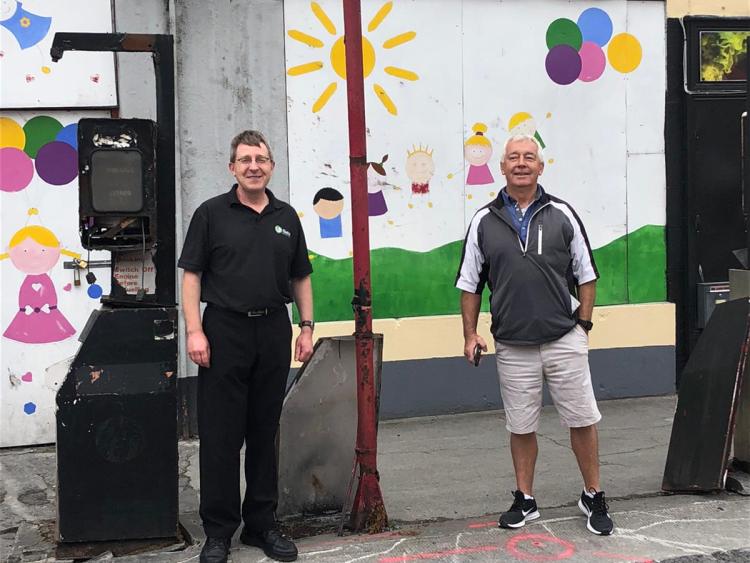 John Doyle, Gala and Cllr Declan Harvey at the old petrol pumps which were removed from William St during the final stages of works

STREET Enhancement Scheme works in Tullamore town centre are “nearing the end” and should be completed by mid July, members of the Municipal District were told last week.

Paving works are currently being completed on upper William St which is to be closed for two days in early July to allow for the resurfacing of the artery.

The council and contractors were lauded for their work by members with Cllr Ken Smollen labelling it “a fantastic job.”

“I know I was critical of this at the start but I have to reflect the concerns of the people who voted for me. I'm happy to admit that I was wrong about that so far,” he added.

Cllr Smollen said the business people of the town had to be considered in the wake of the works finishing and he advocated free parking being allowed in the town centre for six weeks to allow shoppers back in.

Cllr Declan Harvey said the “workmanship was excellent” and he stressed that the correct type of street furnishings should now be provided.

“I want no executive decisions, let people know what is going on especially the councillors,” said Cllr Harvey.

“There'll be a big party when its finished if we could have one,” joked Cllr Sean O'Brien.

He called on the council to provide services and access to the Texas development on its old site at William St stressing the importance of having crucial retail outlets in the town centre.

Cllr Tony McCormack said the work had been completed to a very high standard.

“We hear a lot of doom and gloom but I have a confident outlook for the future,” he added.

Cllr Neil Feighery stressed the importance of having high quality street furniture, such as tables and chairs, in the completed O'Connor Square.