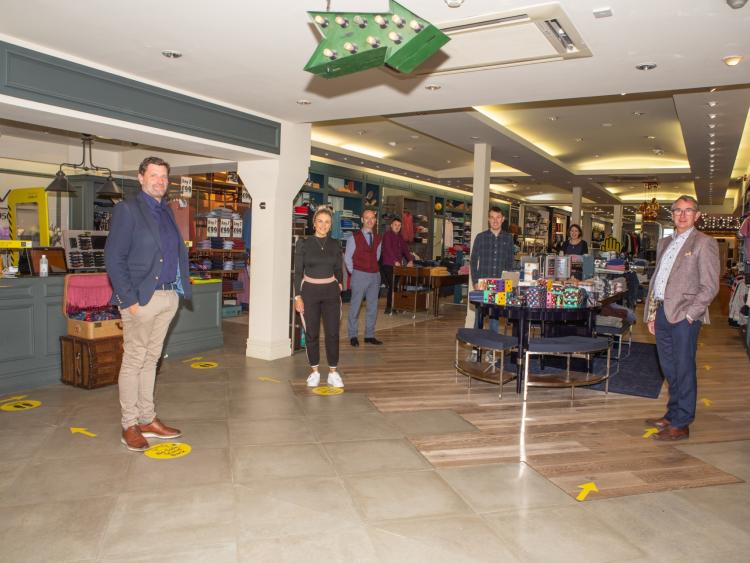 The team at Galvin menswear ready for action

A STEADY stream of shoppers made their way back into Tullamore town centre on Monday with the opening of many retail outlets under phase two of the lifting of Covid-19 restrictions.

The town's main streets were busier than they had been since late March with business people reporting steady trade throughout the day.

However there was no evidence that consumers had thrown caution to the wind as the town was still much quieter that it would normally be on a sunny Summer day.

CLICK HERE TO READ NEXT: List of businesses in Offaly who are open or reopening - Support local business!

Les Keenaghan, owner of the landmark Galvin menswear store, said there was steady football in his William St retail outlet all day.

“It's great to get the town back in action,” said Mr Keenaghan who reported that trade in his store was good all day and on-par with a normal Monday.

Precautions have been introduced in the premises including all the proper signage and social distancing measures are enforced.

“We have no queuing system as people can enter from the front and exit from the rear onto Market Square,”outlined Mr Keenaghan. Galvin's can accommodate at least 35 customers at any one time, he added.

The fitting rooms have been closed and jackets which are tried on by customers are placed in quarantine in a separate area for 24 hours.

Meanwhile a call for the introduction of special car parking incentives to encourage people to shop in the town centre has been made by Independent councillor, Sean O'Brien.

"We simply have to do whatever we can to help our shops and businesses in the town centre and get people shopping in Tullamore and feeling comfortable about parking,” said the Independent councillor.

“Our shops have been affected by the streetscape works for over a year and then suddenly they were hit with closure due to Covid-19. Footfall is important and we want people  to get used to coming into the town centre and finding it a good experience."

He continued: "I am aware that we need to keep traffic moving and avoid people  hogging the parking spaces in the town centre all day.

“However we need to have provision for shoppers to park for short duration and not feel that they have to rush and pay.

“We should give one hour free parking on the town centre streets and free parking for at least two hours in the larger  car parks.”

Cllr O'Brien claimed “there are a lot of unused car parking spaces in Spollens car park off High Street and these places could provide free car parking for shoppers."

Deputy Carol Nolan said that prior to the Covid-19 crisis and throughout the period of the lock-down she had consistently pushed for a targeted, Government supported campaign centred around the “Shop Local” idea.

“It is vital that such an approach is adopted if we are to effectively contribute to the regeneration of our local economies,” she said.

Added the Independent T.D.: “In fact, part of what this crisis has achieved is to make many people acutely aware of what a town or village would actually look like if all local businesses were to be threatened with permanent closure. So, in a sense, what the Covid-19 lockdown has provided us with is a glimpse of a possible future that we must work night and day to avoid becoming a long term reality.”

“To do that, Government and local authorities must get back to basics. They must remember that the well over 90 per cent of all trade in this state occurs within SME’s and micro-enterprises of ten or less employees. That is where the true economic heartbeat of the state and local economies resides,” stressed Deputy Nolan.

Each year we run the fantastic Tidy Towns competition. Wouldn’t it be great if we had something similar, at a national level, for towns who have done the most to bring about a genuine ‘Shop Local’ spirit?

It is time we became far more imaginative about supporting local businesses, because without them, not just the economic life, but also the cultural and community life of a town or village simply drains away.