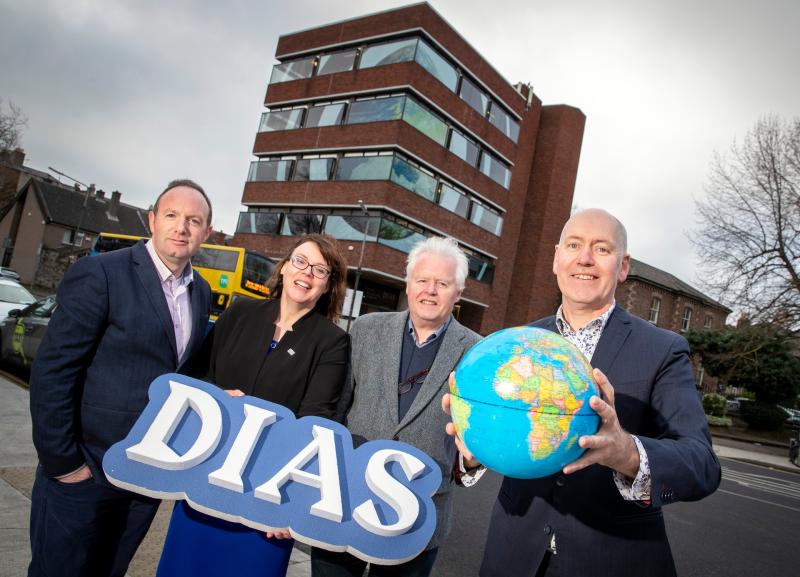 Strong links between  Offaly  and the  Dublin Institute for Advanced Studies (DIAS)  are being highlighted this month as part of DIAS 2020, a year-long programme of activities marking the 80th  anniversary of the establishment of DIAS.

When it was founded by Éamon de Valera in 1940, DIAS was only the second institute for advanced studies in the world (after the Institute for Advanced Study at Princeton in the USA) – and the first such institute in Europe.

Over the past eight decades, DIAS has conducted ground-breaking research and attracted renowned academics from all over the world in its core disciplines of Celtic Studies, Theoretical Physics, Astrophysics and Geophysics.  The Institute has pioneered space research in Ireland; revealed hitherto unknown facts about Celtic society and its legacy; and contributed to greater global understanding of the underpinning mathematical principles of nature.

Offaly native Prof. Peter Gallagher leads solar physics and space weather research at DIAS and is Head of the Astrophysics Section at the Institute. His research is primarily concerned with understanding the fundamental physics of solar storms and their impacts on Earth. He has a long association with the European Space Agency and NASA.

He is head of the  Low Frequency Array (LOFAR)  project at Birr Castle. LOFAR is an international network of state-of-the-art telescopes used to observe the Universe in unprecedented detail at low radio frequencies.  It is one of the largest astrophysics projects in Europe, consisting of 12 international stations spread across Germany, Poland, France, the UK, Sweden and Ireland, with additional stations and a central hub in The Netherlands.

The project uses state-of-the-art data processing and storage systems as well as sophisticated computing techniques to combine the entire network into a telescope with the effective size of the European continent. It allows Irish astrophysical research to be integrated into one of the most sophisticated telescopes on the planet.

The DIAS 2020 campaign was launched at the beginning of this year, and includes a range of activities and events to celebrate the 80th  anniversary of DIAS’s establishment.  As part of the campaign, DIAS is this month donating a copy of  ‘Ingenious Ireland’  to Offaly County Library – and to every county library across Ireland.

Call for  Offaly  people to share DIAS memories and connections

As part of the DIAS 2020 programme, the Institute is planning a celebratory event, ‘Christmas Stars’, this December, which will bring together people with connections to DIAS, past and present.

Commenting today (15.06.20),Dr. Eucharia Meehan, CEO and Registrar of the Institute said: “Over the last eight decades, the researchers at DIAS have included refugees from Nazi Germany; scientists who worked on NASA’s first moon landing; the holders of prestigious international awards; and people who went on to contribute to Nobel prize-winning research.  We have been lucky to attract leading academic talent, both from Ireland and further afield.

“Anecdotally, we know there are hundreds of families throughout Ireland who have strong DIAS connections and memories.  In our 80th  year, we are calling on any Offaly family or individual with a link to DIAS to get in touch with us, and to attend our celebratory event at Christmas.  If you had a parent, grandparent, aunt, uncle or long-lost family friend who worked at DIAS in the past, we want to hear from you!”

Families or individuals with a connection to DIAS, can contact the Institute at    communications@dias.ie  / 01-6140100. Further information about DIAS 2020 is available at  www.dias.ie/dias2020/