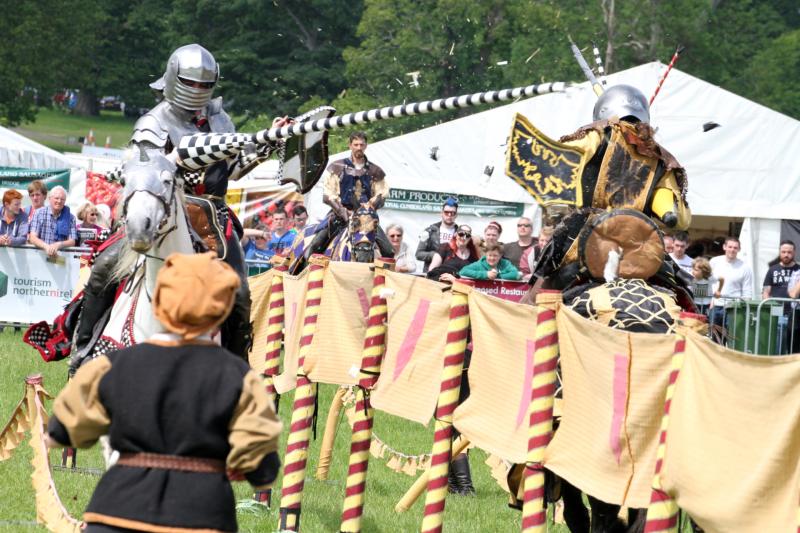 The Knights of the North in action

It has been announced that Living History Ireland will recreate the moment during the Siege of Birr Castle, when Sarsfield's forces attacked the Castle with cannon and muskets.

Describing what the Game Fair public would see, Fair Director Albert Titterington said this would be an "historical moment from the history of the Ancient East of Ireland, brought to life, right in front of your eyes."

“In the Main Arena, Scotland’s Knights of the North will be displaying astounding skills, galloping into battle in full armour. Action packed with jousting, hand to hand combat with swords and daggers, it’s full of amazing stunts, tricks, combat skills and authentic costumes," Albert added.

The re-enactment of the attack on the castle will take place on the Sunday afternoon of the two day fair due to take place on August 26/27.

In September 1690, Birr Castle was besieged by Patrick Sarsfield and the Duke of Berwick fresh from their success at the Siege of Limerick. Although they had a large force of several thousand camped at Banagher, they thought that the Castle would offer little resistance and the attack was carried out by 160 infantry.

Sarsfield, who may even have previously been a guest in the castle had hoped it would be surrendered and did not wish to attack it but the Duke, the 20 year old illegitimate son of James II, launched the attack.

According to the Castle archives: "The infantry marched towards the castle...colours flying, trumpets sounding, drums beating and bagpipes playing...the besieged hoisted a bloody flag on top of the castle, being determined to hold out until relief arrived."

The Castle inhabitants held out valiantly even melting down the lead cistern to make bullets for their musket which proved quite successful against the attackers, whereas the light cannon of the attackers were largely ineffectual against the castle's thick walls.

Some lodged in the east flanker and are now displayed in the hall of the castle. The siege lasted for nearly three days and was eventually called off at sunset when news of a relief column caused Sarsfield to withdraw.

Attendees at the Game Fair can also expect even more exciting living history action by stepping back to when the Vikings
attacked Birr Monastery in 841AD.

Albert Titterington added: “The Viking theme is not only carried through in the Living History Village where families can interact with costumed re-enactors from Living History Ireland, but also in the 'Have A Go' archery stands in the walled garden."

"Here families can 'have a go' with weapons of the period under the supervision of Cavan Instinctive Archery, including being invited to slay the dragon."

Game Fair visitors will be able to wander around the amazing encampment of re-enactors dressed in period costume, showing life as it was hundreds of years ago. This will be in addition to stunning portrayals of ‘moments in history’ all around the Game Fair site and in the Main Arena.

Another tie in for the Castle attack is that Grunal Moneta, facsimile coin maker to the British Museum, will be there allowing visitors to strike for a memento of their visit.

Albert Titterington concluded by saying: “When you add in flying falconry, clay pigeon shooting, gundog and dog training displays, the Victorian poacher and long netting displays; muzzleloaders, horses & hounds, and even carriage driving and dancing horses from the Cochise Stud, there really is no better day out in the country for the family.”

The Birr Game Fair takes place on August 26/27 and more information can be found by following 'Great Game Fairs of Ireland' on Facebook.