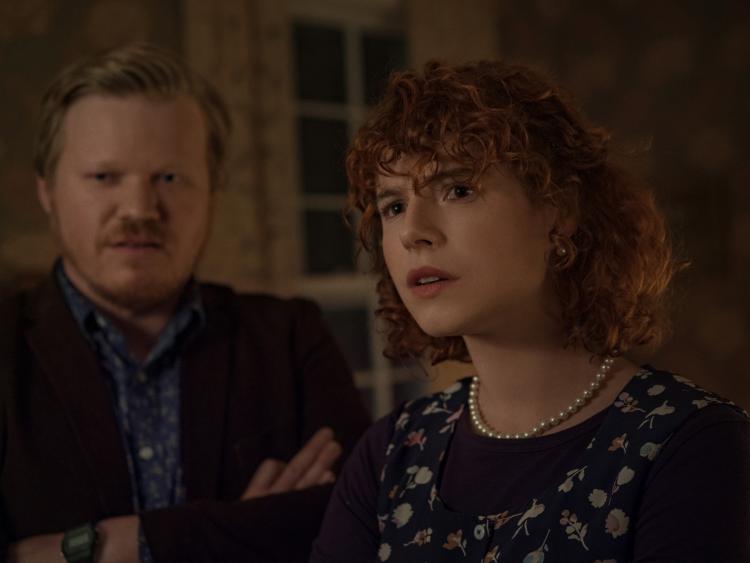 Despite second thoughts about their relationship, a young woman (Jessie Buckley) takes a road trip with her new boyfriend (Jesse Plemons) to his family farm. Trapped at the farm during a snowstorm with Jake’s mother (Toni Collette) and father (David Thewlis), the young woman begins to question the nature of everything she knew or understood about her boyfriend, herself, and the world.

Road trips have their pros and cons, but they do provide an opportunity for epic conversation - especially for a new couple prepared to expound on everything from physics to poetry to Pauline Kael.

After six weeks of dating, Jake (Jesse Plemons) invites his new girlfriend (Jessie Buckley) to his childhood home for a get-acquainted dinner with his parents. They’ve formed a rare and intense attachment in a short time, and a road trip to the family farm on a cold winter day sounds like fun.

But an uninvited thought lodges in the mind of the young woman in the passenger seat; “I’m thinking of ending things.” Though she doesn’t say it aloud, the thought is suddenly so insistent that she’s afraid Jake can hear it in her head. This won’t be an easy ride.

Adapted from Iain Reid’s unnerving debut novel, the film tackles our assumptions about identity and relationships in Kaufman’s signature surrealist style. The narrative of the couple’s journey intertwines with the tale of an elderly high-school janitor, whose laboured routines at home and work intertwine with the couple’s fate in a surprising manner.

In Jake’s sedan, the tête-à-tête ranges far and wide. He knows show tunes, and coaxes her to recite poetry. He’s precocious, intelligent, and so tuned into her. She’s noticed that they get more attention as a couple than they do on their own, and she likes that. They both do. Yet as the miles click by, she asks herself: is this going anywhere?

It’s bitterly cold when they arrive, and she’s grateful to get inside the old house. Jake settles her on the couch with slippers, a fire and music, and introduces the family dog. When his parents appear, she’s the perfect girlfriend; concerned about mom, respectful to dad, generous with Jake. But Jake’s erratic behaviour - and his mom’s insinuations that he’s controlling - begin to unsettle her.

By evening’s end, a white-out blizzard is raging. Jake puts chains on the tires and they plunge into the treacherous night. She’s shaken by all she’s seen: his childhood bedroom, secret corners of the basement, and an intimate window into his parents’ lives, which seem oddly unanchored in time. And the incessant whisper of that intrusive thought. Anxious to get home, she protests when Jake demands a detour off the main road. But he’s the driver, and soon enough, they make a final unscheduled stop.