What could they be? 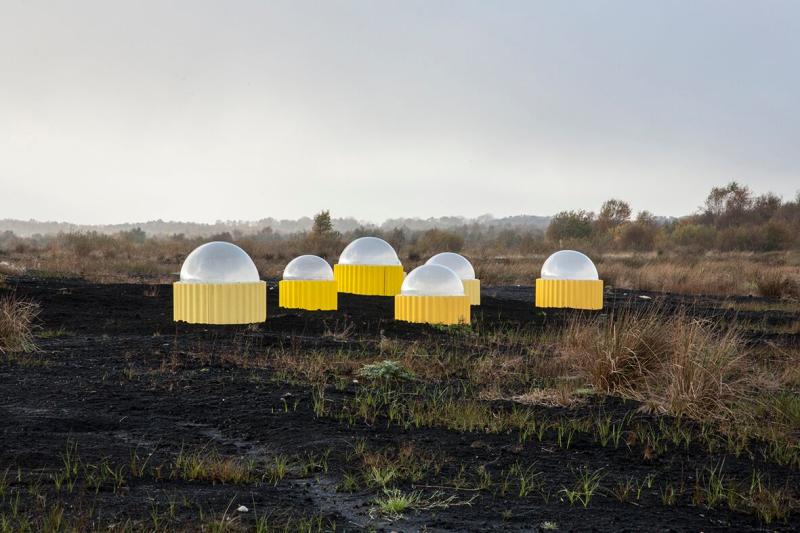 Strange pods have turned heads on Turraun bog in Pullough recently. The other-worldly objects have got tongues wagging, but there is a simple explanation.

The Pullough Residents heritage group are collaborating with London based American artist Rachael Champion to explore and present a site-specific artwork about the natural, social, and industrial history of the peatlands in County Offaly.

‘Places of Holes’ is inspired by literal translation of Pullough as gaeilge, “Pollach”, meaning holes.

Rachael has been working with the heritage group to collect community memories and traditional understandings of the bog. She has used these plus insights from scientific and industrial experts to create a site specific temporary installation in Turraun wetlands.

Turraun is one of a number of restored peatlands in Ireland which are or have been studied by climate scientists to gain an
understanding of the impact of peat production on the carbon cycle.

The artwork itself is called ‘Carbon Flux’ and is a response to the shifting nature of regenerated peat bogs in the Irish Midlands. ‘Carbon Flux’ takes inspiration from the history of peat extraction and the current role of climate science in these remarkable landscapes.

Seven domed cylinders, varying in size and shades of Bord na Móna yellow, are clad in corrugated iron, a material
commonly used in the everyday architecture of a working peat bog. The interior spaces of the cylinders are filled with imagery of microscopic biological life found in the bogs, bringing attention to the invaluable contribution these unseen algae play in the carbon cycle.

The shape and forms of the sculptures are derived from the chamber-system method of manually collecting greenhouse gas emission data.

The event will address climate science, conservation and contemporary art in the bog. It is free and open to all, but please email caitrionadevery@hotmail.com if you'd like to attend.

 Gareth Kennedy, artist, will talk about ‘the art of burying things and digging them up’

 Rachael Champion, artist, will talk about her research and the project's artwork; 'Carbon
Flux'

There will be refreshments after the talk and around 3pm we will make a trip to Turraun to see the installation in the wetlands. Transport will be provided.

Funded and supported by Offaly County Council and Creative Ireland. The group thanked Bord na Mona and Lough Boora Parklands for their support with this project.

Find out more by searching ‘Places of Holes’ or 'Bog Cultures' on Facebook.