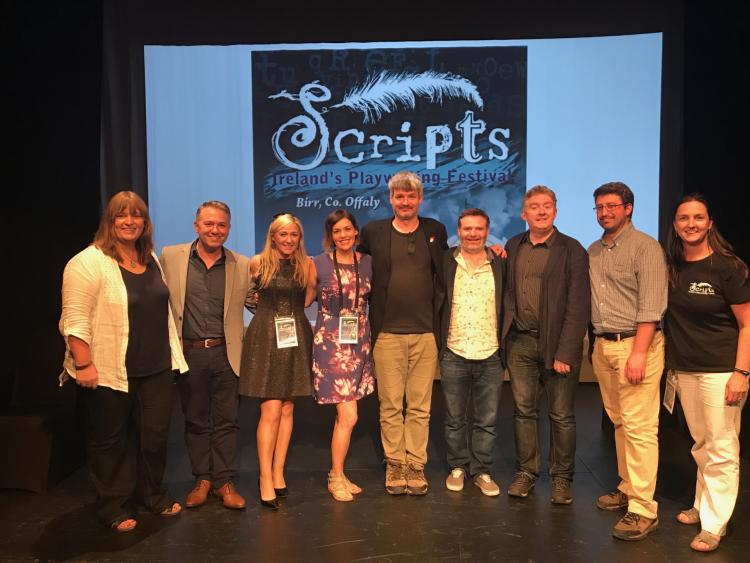 The playwright, hailing from Cavan Town, was one of the three writers specially selected to travel to Birr for a week of mentoring with top writer Eugene O’Brien.

His play, The Experience Room, was selected by the Offaly man and other members of the prestigious judging panel, Fishamble’s Jim Culleton and New Work Associate at The Abbey Theatre, Jesse Weaver.

Philip will now be invited to The Abbey for a private consultation and scripts analysis. Not only that, but he will also secure a place on an Autumn Writing Course of his choice at the Irish Writers Centre in Dublin.

Throughout Scripts, there were Pop Up Plays performed in The Stables, Kelly’s Bar and Woodfield Café. In the first Scripts youth cross-cultural collaboration, young playwrights from America responded to the challenge to write a five minute play on the theme, 'What Next'.

Credit Cards by 16 year old Charley Tiernan was chosen and then performed by Offaly Youth Theatre alumni and Scripts regulars Emma Parsons and Eimear Regan. The duo will both be taking up places at The Gaiety School Of Acting in September.

The weekend also included two sold out workshops, 'Writing Bolder Women' with Gina Moxley and 'Writing A Tiny Play' with Jim Culleton, while younger audiences were treated to a magical performance of The Elves & The Shoemaker by Branar, one of the country’s top children’s theatre companies.

Angela Ryan Whyte, Festival Co-Director said: "We are absolutely thrilled with the outcome of this year's festival - the expansion of the programme allowed us to see Scripts emerging as a destination festival with audiences travelling from all over Ireland & beyond to participate.

"The process was as engaging & enjoyable as ever and we are so pleased to have supported the development of some outstanding new Irish Playwrights. A huge thank you the funders, team & audience who made it all possible."