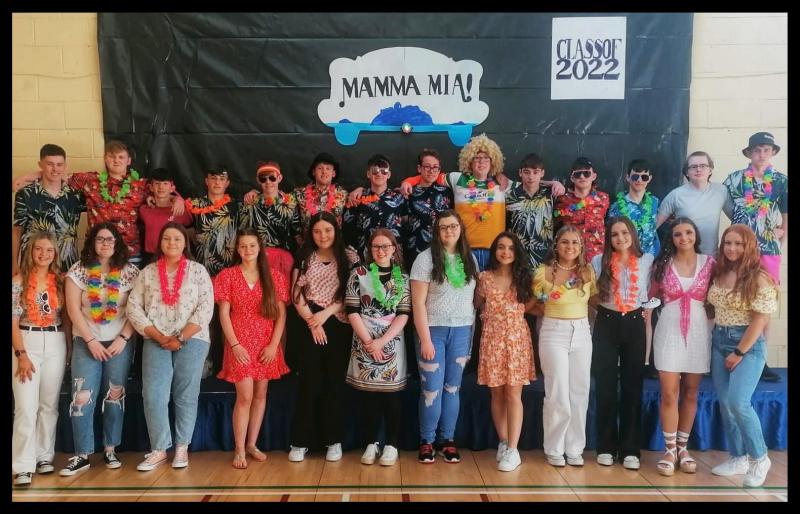 Coláiste Naomh Cormac TY class performed a medley of ABBA songs for the staff and other students last week.

The show was opened by Orla Kilmartin singing ‘I Have a Dream’ followed by a full cast performance of ‘Mamma Mia’. Aimee Delaney produced an exceptional rendition of ‘The Name of the Game’. Multi-talented Mark Mulrooney was part of the Offaly Minor panel to win Leinster honours on the previous Monday and produced an upbeat version of ‘Knowing Me, Knowing You’ during the TY show on Wednesday.

Faustina Egan displayed her outstanding vocal range with a solo performance of ‘The Winner takes it all’ and a duet with Jack Carroll. Ben Murphy and Hannah Cleary continued with a harmonised version of ‘Take a Chance on Me’. ABBA favourite ‘Our Last Summer’ was sung by Ciarán Scully and Ciara Kilmartin.

The final duet of the show was produced by Caoimhe Rigney and Aimee Delaney. Taking on the roles of Donna and Sophie the girls expertly portrayed the emotion of the characters' relationship in their performance of ‘Slipping Through My Fingers’.

Along with these solo and duet performances the male chorus, female chorus and full cast performances of other well-known ABBA songs. Although this performance was much smaller than the previous musicals undertaken at Coláiste Naomh Cormac pre-Covid, the standard and work ethic from the TY class group is to be commended.

The TY class were thankful to 5th year art students Mickayla McDermott and Anastasia Kunitskyy for the creative backdrop and to the staff who facilitated the rehearsals and stage presentation. The talent on show from this group was surely suitably for Broadway!