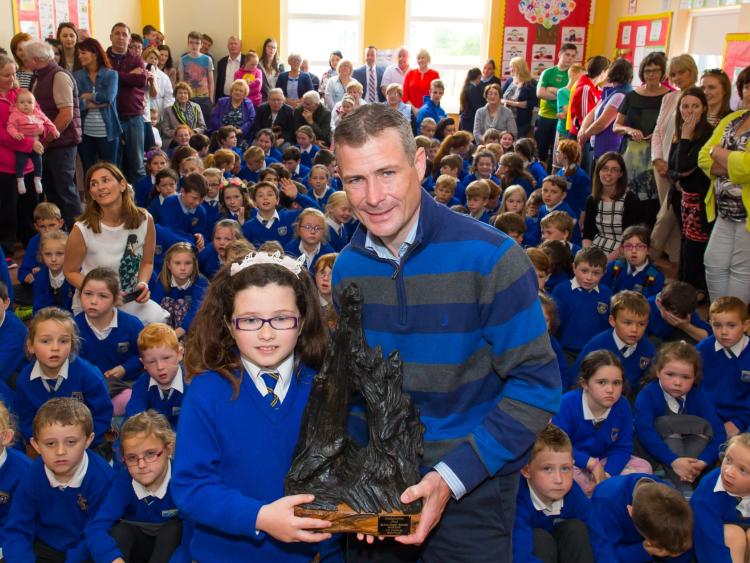 TRIBUTES have been paid to the late champion jockey, Pat Smullen by the Offaly Association (Dublin).

Pat was honoured by the Association in 2016 when he was chosen as the recipient of the prestigious Offaly Person of the Year award.

Speaking at the award presentation ceremony in early 2017, Pat admitted it was both humbling and embarrassing to accept the coveted honour from his fellow county men and women and promised he would treasure the accolade for the rest of his life.

Joining Pat and his family to celebrate the memorable occasion in the Bridge House Hotel were friends and colleagues from the world of racing and from his home village of Rhode and throughout Offaly.

Among those present were two men who had played an important part in his success story, trainers Tom Lacey and Dermot Weld.

The annual awards ceremony is organised each year by a special sub-committee of the Offaly Association [Dublin], chaired by Liam Fleury, and is selected by a judging panel based on nominations from the general public through a coupon in the Tribune and other local newspapers.

Speaking at the outset of proceedings, Chairman, Liam Fleury said that Pat Smullen was a champion in the sport of kings and a deserving recipient of the award.

He added that the awards had been introduced in 1988 because of the importance of acknowledging significant achievements by Offaly people in a variety of different spheres.

'Some countries have an honours list system, we here in Offaly have our own Person of the Year,' stressed Mr Fleury.

He extended thanks to his hard-working committee and others who had assisted in making the event a success including Rhode GAA's John Glennon, John Jones and Paddy Quinn, Tribune sports Editor Kevin Corrigan who penned the citation, Fintan Lalor for printing the tickets, committee member Pat Teehan for producing the booklet, Sarah and Ruth Hennessy for providing the music at the pre-dinner reception and committee Secretary Connie Hanniffy, who acted as Master of Ceremonies for the formalities,

Cllr Eddie Fitzpatrick, Cathaoirleach Offaly Co. Council, said Pat Smullen had now joined an illustrious list of Offalians who had been honoured with the award.

He said that the jockey had notched up an unbelievable tally of 462 wins from a total of 580 races. 'This is certainly a huge achievement and something people look up to,' said Cllr Fitzpatrick.

Chief sponsor, Noel Tynan said the highest accolade was to be honoured by your peers from your own county.

Trainer Tom Lacey said he had known Pat since he was young boy and a national school student.

'When he finished school his father brought him into the yard and said he wanted to be a jockey. He got stuck in from the start and worked very hard,' said Mr Lacey.

He recalled that the yard had a 'few nice horses' at the time and Pat had ridden many winners as an apprentice before joining Dermot Weld's stable where he achieved great success.

Dermot Weld said it was a great honour to be awarded the Offaly Person of the Year and said Pat appreciated such an honour by his own people.

Describing Pat as a professional, Mr Weld said he had ridden winners all over the world and he was very proud to have him as his 'number one rider.'

Following the reading of the official citation by M.C. Connie Hanniffy, [see below], a toast in honour of Pat was proposed by the winner of the 2015 award, top athlete Pauline Curley.

She recalled that she had been both surprised and delighted to accept the Person of the Year award last year.

'Considering the names of some of the great people who had went before me, I felt truly humbled when told that I was receiving the award and I really enjoyed the whole evening. The award occupies a special place in my home and I thank the Offaly Association in Dublin for deeming me worthy of receiving such a prestigious honour,' outlined Pauline.

'For many Offaly people, sport occupies a central role in their life. It is their main past time, their main outlet for pleasure and enjoyment outside of their family and work life and it is only fitting that sports people have featured so prominently on the list of past winners.'

She said she was delighted to see another sports person being honoured and admitted that though he knowledge of horse racing would be limited she recognised that the name of Pat Smullen is a very familiar one and his record and achievements are immense, both on a national and international stage.

Accepting the award, Pat Smullen extended thanks to the organising committee and all those present at the gala occasion.

'Like anything in life you need a bit of luck and I have been very fortunate . . . in my eyes I have never worked a day as I do something that I am passionate about.'

He extended thanks to the Lacey family for all their help at the start of his career and stressed that Tom Lacey had provided great guidance and 'sent me on my way to make it in this industry.'

Pat added that he was very fortunate to have met Dermot Weld, the man he revealed he called 'the Boss', and to have taken over when Mick Kinnane was moving on.

'To look back on it in the fullness of time he took a gamble, gave me a chance, a chance that I could only have dreamed of,' outlined the champion jockey.

He added that Mr Weld had guided him throughout his career and said 'it was a privilege to be his jockey.'

Pat added that the industry had also provided him with a wife and paid tribute to Frances for her support to him and their children Sarah, Hannah and Paddy.

'She takes all the stresses and worries of everyday life away and without her there is no doubt that I wouldn't be standing here tonight, he added.

The award recipient also thanked his late father, Paddy and mother Mary, who was present at the ceremony, for all the sacrifices they had made for him and his siblings.

'We never wanted for anything when we knew there was nothing . . they gave us great morals, thought us how to behave and gave us a great work ethic.'

The formalities concluded with a presentation of a bouquet of flowers to Pat's wife, Frances and mother, Mary and dancing continued until the early hours to the sounds of 'The Secrets'.

'His record in one of the toughest sports of all has earned him international stardom and his achievements have brought great pride to his home village of Rhode and home county of Offaly.

Along with professional golfer, Shane Lowry, the success story of Pat Smullen has brought a glow of satisfaction to Offaly during a period when their traditional source of sporting pride, the GAA, has been on the backfoot.

A native of Clonin in Rhode, he grew up in a place famed for its football achievements and supplying many of the legends of the game in the county but he pursued a very different path than most of his young compatriots.

Now 39 years of age, he has established himself as the top flat jockey in Ireland and in recent years, his star has really shone brightly as he has rode some of the top horses at some of the biggest Irish and international meetings.

He gained his early interest in horses when working with his brother Sean in Joanna Morgan's yard in Ballivor, Meath where he helped excercise, prepare horses and ride them at breeze up sales. He later gained invaluable experience in the nearby Tom Lacey's yard and once he decided to train as a jockey, it quickly became obvious that he was destined for greater things and would make a very successful career in the sport.

He was apprentice champion jockey in 1995 and 1996 and in 1997, he made a significant breakthrough when he rode his first group 1 winner, the Tommy Stack trained Tarascon in the Moyglare Stud Stakes.

In 1999, he was appointed as stable jockey to one of Ireland's most successful trainers, Dermot Weld, stepping into the shoes of Mick Kinnane and taking on one of racing's most pressurised positions. This has proven to be a marriage made in heaven as they have enjoyed sensational success together.

Over the years, he has rode winners on some of horse racing's biggest days at some of it's most revered venues.

His biggest win of all came last June when he rode Harzand to success in the Epsom derby while the same horse gave him his third success in the Irish derby at the Curragh three weeks later.

He rode his first classic winner when Vinnie Roe won the Irish St Leger in 2001 and he won the race with the same horse for the next three years. His first English classic winner came when he got the Weld trained, Refuse to Bend, to victory in the 2,000 Guineas at Newmarket in 2003.

A year later, he won the Irish derby for the first time on Grey Swallow and he landed the Irish 1,000 Guineas on two occasions, with Nightime in 2006 and Bethrah in 2010.

He had further Irish classic success when winning the Oaks on the Hugo Palmer trained Covert Love and he has ridden some of the most exciting horses to victory in major races.

His victory in the Irish derby last June was his 25th group 1 success and he looks set to enjoy much more success in the coming years.

His record at home has been unmatched as he has taken on the mantle wore by Mick Kinnane in the 1990s and Johnny Murtagh in the 2,000s and he is now being asked to perform on the international stage.

He has won widespread admiration in one of sport's most unforgiving disciplines, where mistakes are ruthlessly punished, and his consistency, attitude and error free riding have been among his hallmarks.

Last year, he rode over 100 winners for a third consecutive campaign and this achievement can be put into context by the fact that it was only achieved twice previously in this century, by Mick Kinnane in 2003 and Joseph O'Brien in 2013.

He will be forty this May but remains a ferociously driven individual, a man who loves to practice and win and for whom little compares to the buzz of a big race day and entering the winners' enclosure.

Throughout it all, he has never lost his connection with his home area. After living on the Curragh for a number of years, he was delighted to return to live in Rhode, at Ballybrittan, and he is a hugely popular local figure.

He is married to a revered racing figure in Frances Crowley, a former Irish champion amateur jockey and a classic winning trainer and they have three children, Hannah, Paddy and Sarah.

There have been disappointments and testing moments along the way, near misses and rides and races that got away but his career has been one of fantastic achievement and glory.

The 2016 Offaly person of the year goes to a very deserving home, Pat Smullen.'