WATCH: Offaly link to the hit song you're loving on the radio

A hit song still big on Irish and UK radio five months after its release has a great Offaly connection.

A Little Bit Of Love is a hit for English singer-songwriter Tom Grennan whose dad, Martin, is from Ballycumber.

The song is still in the UK's Top 40 chart having peaked at No.7.

"I’ve got the Irish blood in my heart and it’s my second home. I just love it so much," Tom, who has an OY tattoo in honour of Offaly, told Irish World last year.

Tom recently performed in an Offaly jersey during a lockdown session at the London Irish Centre in the Electric Ballroom.

He is a big star in the UK and recently performed his track Let's Go Home Together with Ella Henderson on BBC's Graham Norton Show. 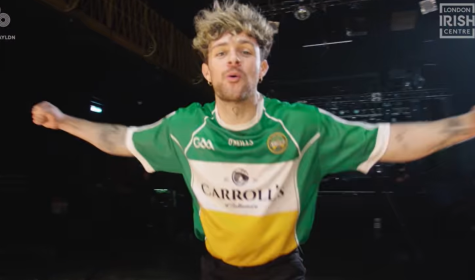 ABOVE: Tom in his Offaly jersey in the Electric Ballroom