THE BIG READ: Offaly man's mission of mercy is personal 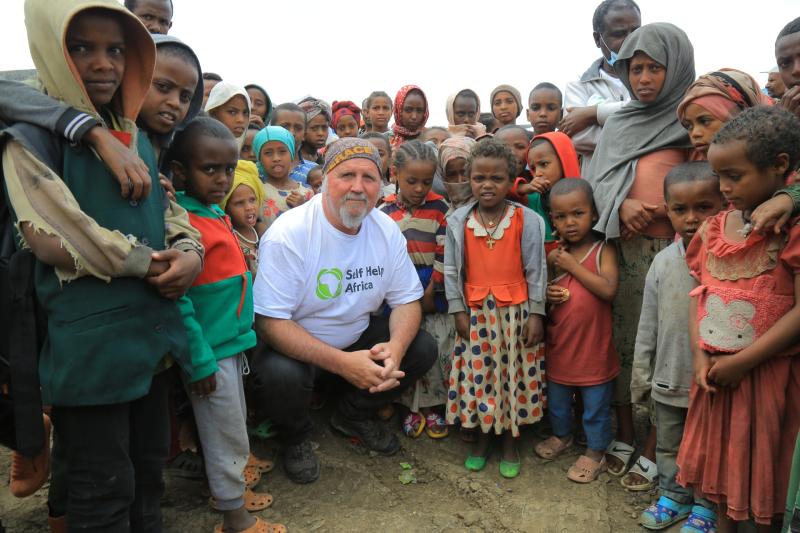 As the dad of two Ethiopian daughters, the food crisis that is gripping the Horn of Africa is personal for Ronan Scully.

For Clara born Ronan, that region of Africa is special, and so it was with a heavy heart that he touched down at Addis Ababa airport last week, to see for himself the full extent of a crisis that has left more than 20 million people in desperate need and children and people dying every 48 seconds.

Representing both Self Help Africa, with whom he works and the Irish Emergency Alliance, of which Self Help is a part, Ronan travelled to Ethiopia to highlight one of the worst food crises that Africa has experienced in 40 years.

His visit was in part triggered by a recent conversation with his 12 year old daughter Sophie, who implored her dad to do what he could to highlight the plight of millions of Ethiopians ravaged by food shortages caused by successive failed harvests.

“Sophie is old enough to understand that the country of her birth is in deep trouble. While the television is full of nightly bulletins about the war in Ukraine, she said to me that people needed to pay attention to the tragedy that was unfolding in Africa,” he explained.

One in five people in Ethiopia face food shortages this year, and millions of people have been displaced from their lands, in large part because of crop failures caused by climate change.  Furthermore, up to nine million livestock are estimated to have died, as water holes dry up and grazing disappears from the barren land.

“Rising food, fuel and fertiliser prices, resulting from the war in Ukraine has made the situation even more severe, while spiralling inflation has pushed food and commodity prices beyond the reach of what many families can afford,” he says.

In the past,  droughts were not always so disastrous  and are part of a regular climate cycle in the Horn of Africa’s drylands. However, greater frequency and the more erratic rainfall patterns, combined with underlying economic, social, and environmental factors, have meant that recent droughts are having a particularly devastating impact on communities.

During last week’s visit, Ronan visited a refugee camp at Debra Bahran, less than two hours from the Ethiopian capital, Addis Ababa, where he witnessed how more than 80,000 people were living in cramped conditions, with limited sanitation.

“There were up to 12 members of one family sleeping on a mat on the ground; grandmothers alongside infants, nursing mothers and teenagers.  They had nothing with them apart from small bundles of clothing and jerry cans for water.”

“The youngsters are painfully thin, and in some cases the younger children are just skin and bone. It was heartbreaking to see, and difficult to leave, knowing that I was going back to the comfort of a bed to sleep in”, he said.
"Their world has been turned upside down," Ronan Scully says. "They get very little food, and many are malnourished."
Ronan Scully described the camp as a health disaster waiting to happen.  While there have been sporadic outbreaks of sickness caused by contaminated water and the spectre of Covid-19 is ever present,  camp officials say that they have had no serious outbreaks of life-threatening disease, such as cholera, to this point.

“When you have so many people living in such close confines there is always a risk of sickness, and a risk of diseases spreading rapidly,” he said.

Ronan said that a recent appeal by Self Help Africa had allowed the organisation to directly support 2,000 families with aid, while the organisation was also working throughout the country helping tens of thousands of farming families to adapt their farming methods to the changing climate.

“Crops that can cope better with drought are being introduced, and alternate crop varieties that allow farming households to spread the risk are also being promoted,” he said.

The situation has become even more dire as food and commodity prices rise as a result of the crisis in Ukraine. Until now, Ethiopia has depended on Ukraine for fertilizer and sunflower seed oil. The United Nations has warned that Somalia, which receives 90% of its grain from Russia and Ukraine, is on the brink of famine.

The price of fuel has doubled and the cost of water has gone up 60%. More than 200,000 people could be facing famine in Somalia by the end of September, while 1.5 million children under five may face acute malnutrition by the end of the year. Immediate action is necessary to scale up and sustain humanitarian assistance through at least the middle of 2023 to avert the risk of famine.

The ripple effects of Russia’s invasion of Ukraine are exacerbating the threat of widespread starvation. Scully says, "The cost of a food basket has risen by 66% in Ethiopia, partly due to the war in Ukraine forcing families to sell assets in exchange for food or other lifesaving items."

Ronan Scully says that for people in Ethiopia, "their world has been turned upside down." "They don't have food and children are malnourished. Across the region, millions have become displaced because of drought, climate change and other issues.
"It's not their fault." Scully says. "They have left everything behind except for their kindness, love, care, courage and their dignity. Their children are out of school with zero chance of getting an education. In the camps I have seen there is such an urgent need for the basics of life.”

With the launch this week of an appeal by the Irish Emergency Alliance for the Horn of Africa, Ronan Scully says that his organisation and the other members of the Irish consortium will be able to do much more to support African communities who are currently on the frontline of the climate crisis.

You can support the urgent Irish Emergency Alliance appeal at  www.irishemergencyalliance.org  or by calling 1 800 939 979.