OPINION: Collins remembered as a remarkable man but we should recognise positive contribution of De Valera too 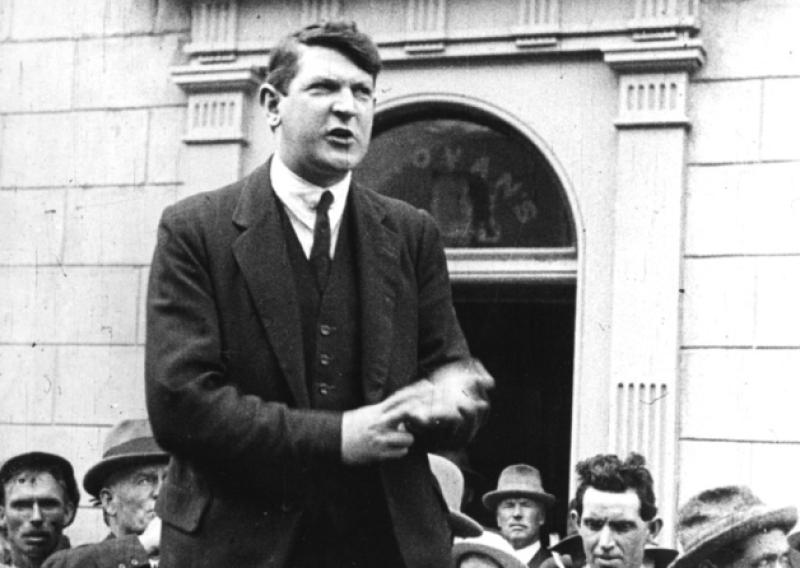 OPINION: Collins remembered as a remarkable man but we should recognise positive contribution of De Valera too

THIS Sunday, August 21, will be of major historic significance in the 100-year long, and frequently difficult, history of this state.

For the first time a commemoration of the assassination of Michael Collins at Béal na Bláth on August 22 1922 will be addressed by a Fianna Fail Taoiseach.

Micheál Martin will be joined there by Tánaiste and Fine Gael leader Leo Varadkar, the party most associated with Michael Collins and directly descended from the pro-Treaty Provisional government of which he was a member and which set up this state.

This annual Collins commemoration at Béal na Bláth takes place on the Sunday closest to August 22 every year.

Before looking at next Sunday’s event, an indication of the extraordinarily difficult birth which faced this state can be gleaned from recalling what was happening here 100 years ago.

To begin it was dealing with an increasingly bitter civil war that was to scar politics in this part of the island for the greater part of the 20th century. That began on June 28 1922 with the bombardment of the Four Courts. Then on August 12 that year the chairman of the Irish team which negotiated the Treaty that led to this state’s existence, and then President of Dail Eireann, Arthur Griffith died suddenly of a brain haemorrhage. He was 51.

It was Michael Collins who said that “in Arthur Griffith there is a mighty force in Ireland. He has none of the wildness of some I could name. Instead there is an abundance of wisdom and an awareness of things which are Ireland.” Collins might well be referring to himself where such `wildness’ was concerned.

Griffith said of Collins, that he was “the man whose matchless energy, whose indomitable will, carried Ireland through the terrible crisis; and though I have not now, and never had, an ambition about either political affairs or history, if my name is to go down in history I want it to be associated with the name of Michael Collins.” So it came to pass. Both men are also associated forever in death.

Collins’s death at Béal na Bláth followed Griffith’s by just 10 days. Collins was then chairman of the Provisional Government, its Minister for Finance, as well as President of the Irish Republican Brotherhood. Remarkably, considering his position and achievements up to then, including leading the guerilla campaign in the Irish War of Independence, he was only 31 when killed.

An outgoing, charismatic man and avowed `people person’, it is hardly surprising he has become so mythologized in the 100 years since his killing. It happens with the sudden death of remarkable young people, fanned on by that deep sense of irredeemable loss.

Indeed, no less a person that Eamon de Valera, Collins’s principal political foe on the anti-Treaty side during the Civil War, said “it is my considered opinion that in the fullness of time history will record the greatness of Michael Collins and it will be recorded at my expense.” And it has, sometimes unfairly so as in, for instance, the film `Michael Collins’ by Neill Jordan, which implicates de Valera directly in the shooting of Collins at Béal na Bláth.

But if Michael Martin will be the first Fianna Fail Taoiseach to take part in a Michael Collins commemoration at Béal na Bláth he is not the first senior figure in that party to do so. That was Brian Lenihan jnr who, as then Minister for Finance, delivered the oration at the 2010 commemoration and just months before his own early death in June 2011. He, too, was 51.

Brian Lenihan was there at the invitation of the Collins family, something that moved him very much. It was, he said, “generous and quite unexpected” and he was “delighted to accept.” Unsurprisingly he was also “acutely conscious” that it was “the first time someone from the Fianna Fail party, has been given this privilege.”

He also pointed out that: “we ask and expect those in Northern Ireland to live and work together despite the carnage and grief of a much more recent, and much more protracted, conflict.”

It is doubtful however whether, even then, he foresaw that Fianna Fail and Fine Gael would be in Government together within 10 years. Still less likely would it have been that he could have forecast the possibility of the majority party in Northern Ireland, Sinn Fein, going into government in the Republic with Fianna Fail, as is now widely speculated on as a likely outcome of the next general election.

At that 2010 commemoration Brian Lenihan paid generous tribute to “the remarkable qualities of a man who, along with O’Connell, Parnell and De Valera, is part of our national Pantheon. As Dr Garret FitzGerald has written, these other three political leaders `had not only the capacity and ability to play a major political role over an extended period of time, but also the opportunity to do so’.”

Dr FitzGerald had added, he said, that “There are others who if they had lived. . …might have rivalled or even outshone some or all of these three – most notably Michael Collins in this century.”

With admirable honesty he continued: “Fine Gael has of course been the political custodian of the memory of Michael Collins, including at a time when some in Fianna Fail were unwilling to recognise his importance and to salute his greatness. It may be that De Valera himself felt a sense of challenge from the ghost of Collins. Political partisanship led to their followers championing one or the other.”

De Valera’s reputation “may have suffered from the fact that he stayed on too long as Taoiseach and leader of his party. But so much of our thinking about Collins is dominated by questions whose answers we will never know. One of the many imponderables that arise from his untimely death is the impact he would have had on the politics of the new State of which he had been a key architect.”

He continued how “no man is fully formed at the age of 31. Had Collins lived, would the Civil War have ended sooner and would its legacy have been less bitter? What kind of leader would he have become and what would have been the shape of the political party he would have fashioned? Would the party to which I belong have been pre-empted by the party he would have created? How would he have approached Northern Ireland and relations with Britain? There are tantalizing questions.”

Indeed they are. In a pointer to how today’s Ireland might look at the contributions of Collins and de Valera, Brian Lenihan regretted that, while “the full magnitude of Collins’s achievements has, I believe, come to be appreciated and valued by Irishmen and women right across the political spectrum” this had also “regrettably and unnecessarily, been accompanied by a denigration of Eamon De Valera, as if only one of the two could win the approbation of history.”

He suggested that “surely now we have the maturity to see that, in their very different styles, both made huge contributions to the creation and development of our State.”

And that is as it should be. Instead of dwelling on both men as sources of division it is time, 100 years later, to recognize the positive contributions both made to Ireland.